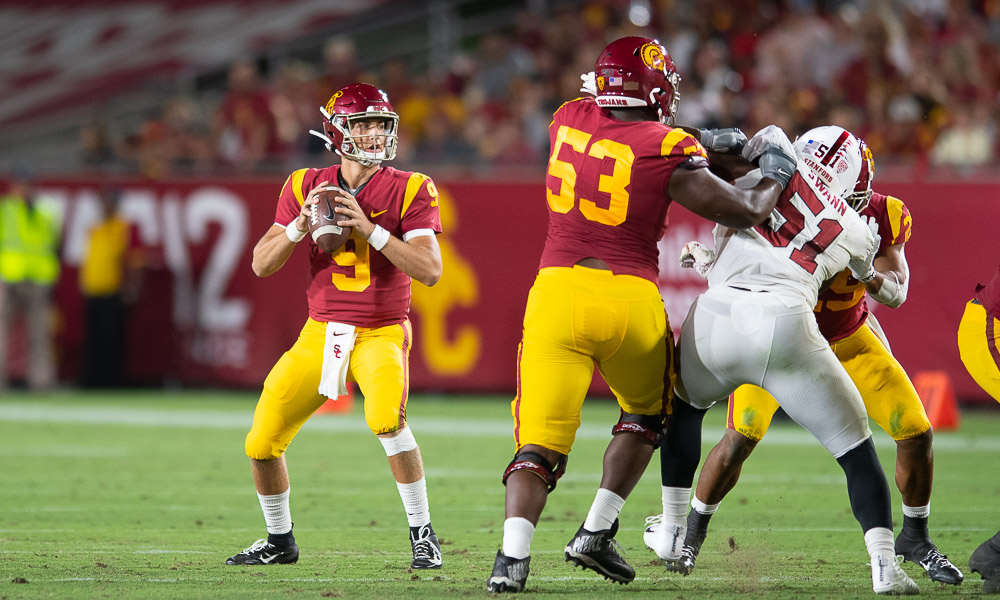 One year ago today, USC fans were officially introduced to Kedon Slovis. Sure, Slovis filled in for an injured JT Daniels to finish off a win against Fresno State the previous week, but Sept. 7, 2019 was the day Slovis announced himself to the college football world.

In his first start, Slovis faced a No. 23 Stanford team and was very quickly staring down a 17-3 deficit.

His first statement play was lofting a beautiful 39-yard scoring pass that dropped into the lap of Amon-Ra St. Brown in the endzone. That started a run where USC scored touchdowns on six of seven drives in turning a 14-point deficit into a 45-20 blowout.

Slovis completed 28-of-33 passes for 377 yards and three touchdowns as he set the USC record for passing yards by a freshman in his first start.

The USC defense pitched a shutout in the second half, as Stanford missed two field goals, threw an interception and turned the ball over on downs on its five second-half possessions.

It wasn’t a big day on the ground for USC, but Vavae Malepeai rushed for two touchdowns and Stephen Carr added another.

USC blew out Illinois 55-3 as Chris Miller caught three passes for 155 yards and a touchdown. In the fourth quarter, quarterback Matt Koffler connected with R. Jay Soward on a 97-yard touchdown pass, setting a record for the longest pass play in USC history.

In one of the ugliest offensive games in USC history, the Trojans threw for 54 yards against Washington State in a 10-7 loss. USC’s lone touchdown came on a 22-yard drive with 10 minutes remaining in the second quarter. On its three drives longer than 22 yards, the Trojans missed two field goals and turned the ball over on downs. Washington State kicked a field goal to go up 10-7 with 3:03 remaining and USC’s final drive ended in an interception at its own 32-yard line.

This game didn’t result in Lane Kiffin’s firing, but it certainly set the stage for it to happen three weeks later, following a 62-41 blowout loss at Arizona State.