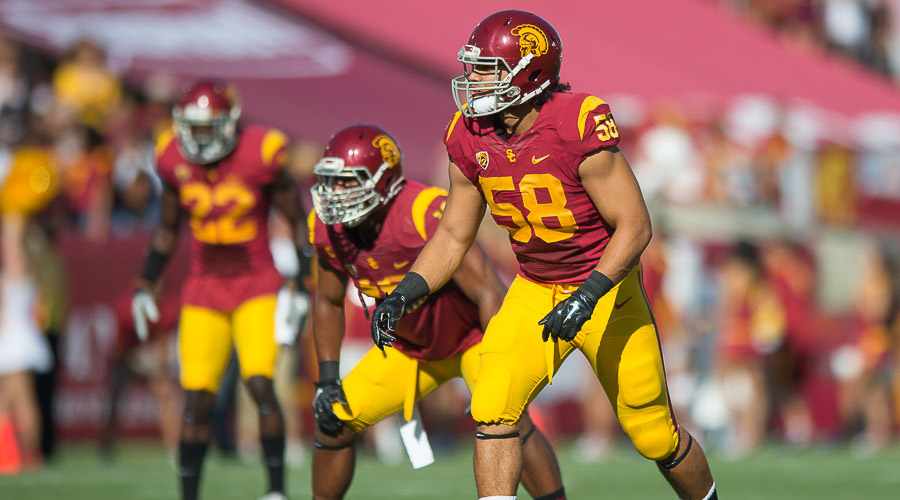 From 2010 to 2014, USC and Stanford engaged in some classic battles, as none of the five games was decided by more than seven points. On September 6, 2014, a wild game came down to a long, late field goal and a huge defensive turnover.

Following a 55-21 Stanford blowout of USC in 2009–the most points the Trojans had ever allowed at the time–the next five games were nail biters, with one going to triple overtime, one decided on the final play of the game, one with 19 seconds remaining and the other two winning scores happening in the fourth quarter.

On Sept. 6, 2014, the No. 14 USC Trojans went up to take on the No. 13 Stanford Cardinal. At time time, Stanford held the nation’s longest home winning streak in FBS at 17 games. The Trojans were coming off a blowout win against Fresno State in Steve Sarkisian’s first game as the head coach at USC, but this would be his first real test.

It hadn’t happened often against Stanford, but USC found some success with the running game, as Buck Allen rushed for 154 yards and the Trojans’ lone touchdown came from Justin Davis on the ground.

The on-field action was only part of the story in this game, as Sarkisian received a penalty for standing too close to the field, middle linebacker Hayes Pullard was ejected for targeting late in the third quarter, and athletic director Pat Haden made his way down to the field to speak to the officials during the game.

But after Stanford took a 10-7 lead into halftime, USC’s defense rose to the occasion. The Cardinal had five second-half possessions, and they finished in a missed field goal, a punt, downs and two fumbles lost.

With 6:45 remaining in the game and the game tied at 13, USC took over at its own 7-yard line following a Stanford punt. Four runs took the ball out to the 31, and then Cody Kessler hit Nelson Agholor for a 29-yard gain. Three plays later, facing fourth and five at the Stanford 36-yard line with 2:30 remaining, Sarkisian sent out his offense, but eventually called a timeout and rethought the decision.

One year earlier, Heidari nailed a 47-yard field goal with 19 seconds left to give interim head coach Ed Orgeron a memorable 20-17 win over No. 5 Stanford. Again, Heidari delivered in a huge situation.

But Stanford still had an opportunity to tie or win, as the Cardinal drove to the USC 25-yard line with 25 seconds remaining. A tying field goal looked inevitable, but Stanford wanted to at least take a shot or two at a winning touchdown. Quarterback Kevin Hogan took the snap and looked to his right for a receiver in one-on-one coverage. But before he could deliver it, outside linebacker J.R. Tavai came untouched around the edge and delivered a blindside hit, causing a fumble that was recovered by Scott Felix.

USC came away with a 13-10 win, though any momentum to the start of the Sarkisian era with the Trojans would come crashing down the following week, as the No. 9 USC Trojans went on the road and lost 37-31 to unranked Boston College.

After generating just 44 offensive yards in the first half, No. 23 USC somehow still found itself tied 7-7 with No. 5 Florida State. The Seminoles wound up winning 14-7 after putting together a 97-yard drive in the fourth quarter that was nearly snuffed out by a Brian Kelly interception.