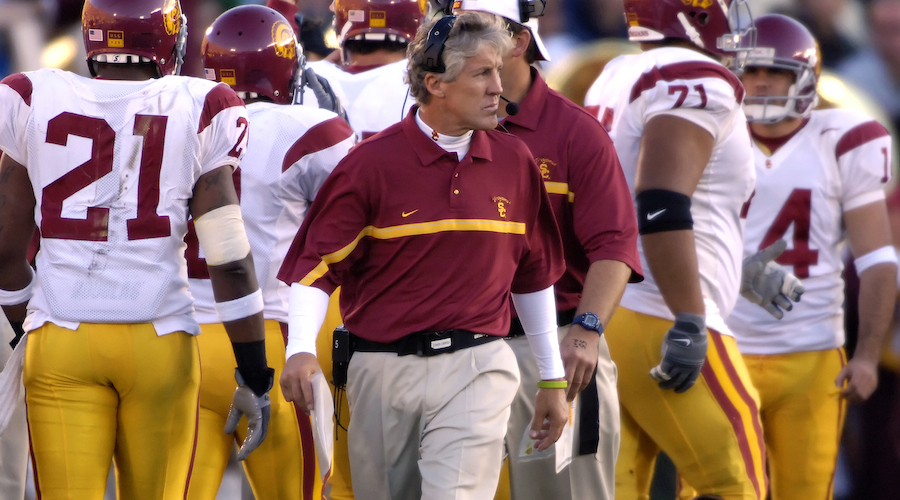 Every day over the next several months–during what was supposed to be USC’s fall football season–we’ll be looking back at the impactful games, events and performances throughout USC’s football history that took place on each date. Today, we’re getting started with September 1, and the start of one of the great runs in college football history.

A 21-10 win against San Jose State in front of 45,000 people in the Coliseum didn’t exactly scream “incoming college football dynasty,” but that’s exactly what happened, as Pete Carroll was on the sidelines for his first game as head coach at USC.

Behind a potent ground game–Sultan McCullough ran for 167 yards and three touchdowns–and three turnovers–interceptions by Chris Cash and Bernard Riley, and a fumble recovery by DeShaun Hill–USC fans got to see glimpses of what would become staples under Carroll. McCullough ran for touchdowns of 7, 14 and 35 yards in the game, with the first touchdown of the Carroll era coming on a Statute of Liberty-ish play where quarterback Carson Palmer faked a quick slant and then spun around to hand the ball to McCullough, who darted outside and into the endzone.

USC fans also got to see plenty of that Carroll-brand enthusiasm on the sidelines. At least, until the players executed a Gatorade shower they felt was entirely appropriate for the first win of a coach’s tenure, while Carroll clearly did not.

Of course, this game didn’t exactly kick start a major run. It was followed by USC going on to lose five of its next six games. Including this game and that ensuing slide, USC would go on to a 4-12 record over a 16 game stretch between the 2000 and 2001 seasons.

But after losing five out of their next six, USC would then go on to lose five out of its next 57 games, marking one of the great runs in college football history.

A few of the notables in this game included Palmer, who was 21-of-28 for 213 yards, wide receiver Grant Mattos, who had five catches for 75 yards, linebacker Frank Strong, who led the defense with seven tackles and two deflections, and safety Troy Polamalu, who finished with six tackles.

San Jose State’s quarterback that day was Marcus Arroyo, who served as the Oregon offensive coordinator the past two seasons before taking over as the head coach at UNLV last December.

On this date in 2007, USC paid tribute to kicker Mario Danelo, who had passed away the previous January. After scoring the first touchdown of the season, the Trojans lined up for the extra point without a kicker, in an emotional in-game display.

One play, one score, from Marqise Lee

There are very few seasons in USC history that present the contrast between the first play and final game quite like the 2012 season. While the year ended on a phenomenally disappointing low note with Bowl Game loss to Georgia Tech, it could not have started on a higher note. On the first play of the 2012 season, wide receiver Marqise Lee took a quick throw from quarterback Matt Barkley and turned it into a 75-yard touchdown.