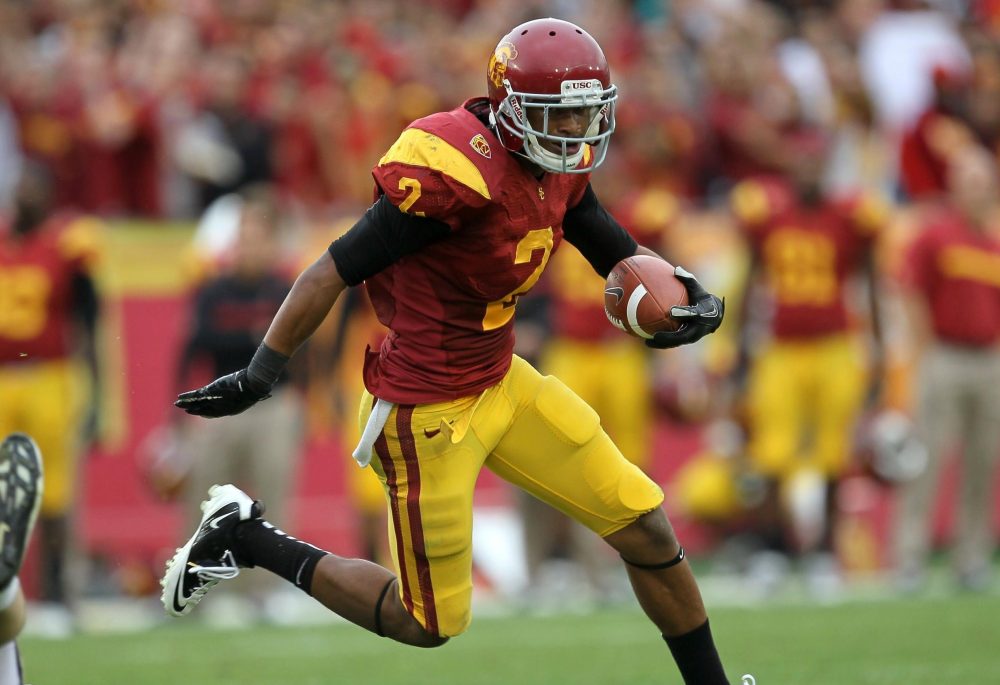 The Lane Kiffin era at USC had more than its share of downs, but there were absolutely some high moments. One of those took place on Sept. 3, 2011, as Woods set the USC record for receptions in a game.

USC was coming off a 4-5 finish over the final nine games of the 2010 season and was again ineligible for post-season play in 2011, but–as usual for USC–there was talent up and down the roster and the Trojans were capable of just about anything.

Like much of the happenings during Kiffin’s tenure, this game was just confusing. USC took a 19-3 lead (two missed two-point conversions) into halftime and then didn’t score a single point in the second half, needing a final-minute interception from Torin Harris to hang onto a 19-17 lead.

That 16-point halftime lead came largely because of Woods, who had 11 receptions for 115 yards and three touchdowns in the first half alone.

Woods tied Johnnie Morton’s school-record of 15 receptions late in the third quarter, then broke it early in the fourth quarter. He finished with 17 receptions for 177 yards and three scores. The touchdowns came on passes of 2, 7 and 43 yards.

Woods’ single-game receptions record still stands for the Trojans, though players have taken a run at it since 2011.

The following season, Marqise Lee caught 16 passes against Arizona, and Nelson Agholor had 16 receptions against Cal in 2014. Woods took aim at his own record later during the 2011 season, but finished with 14 catches against Arizona.

Woods went on to set the Pac-12 single-season receptions record in 2011–a record that was broken by Lee in 2012.

Overshadowed a bit by Woods’ performance, Matt Barkley also set a USC record in this game, as he completed 34 of 45 passes for 302 yards. He completed 16-straight passes at one point and his 34 total completions set a USC record, passing Todd Marinovich’s 1989 record.

USC running back Shawn Walters scored two second-half touchdowns to bring USC back from a 17-10 deficit to give the Trojans a 24-17 win against Washington to open the 1994 season.

Walters finished with 91 yards on 26 carries, while Delon Washington led the Trojans with 109 yards on 10 carries.

One of the most unpleasant USC football experiences in recent memory. Also, one of seasons with the greatest disparity from opening game to final game, as USC started the season with a blowout loss to Alabama, and finished it with one of the great wins in Trojans history against Penn State in the Rose Bowl.

Previous On This Date entries