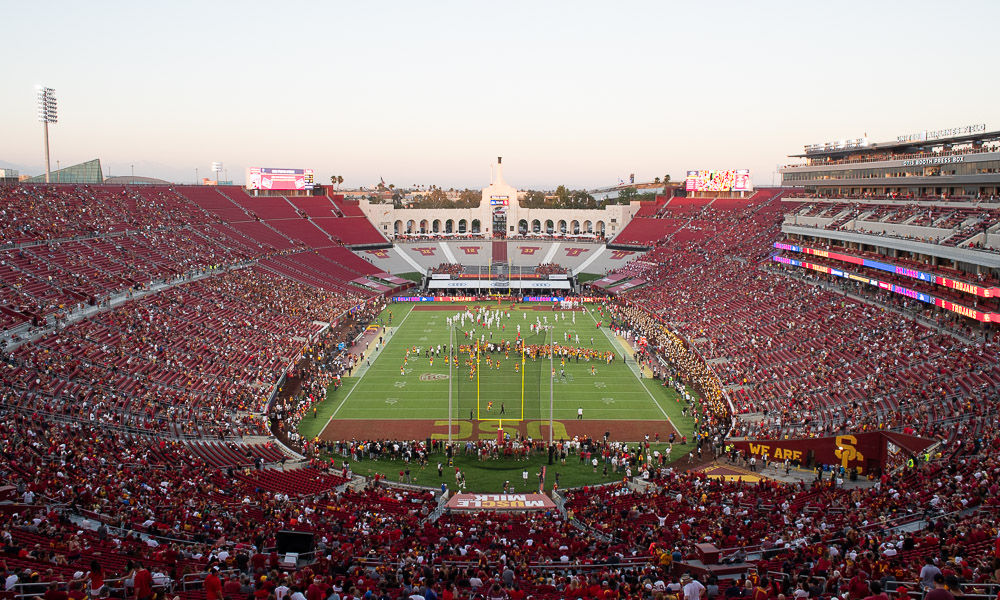 On this date in 1993, USC fans were treated to a renovated Coliseum and a single-game USC record, as wide receiver Johnnie Morton hauled in 15 catches in a blowout win against Houston.

The Los Angeles Memorial Coliseum had undergone a $15 million renovation–the first major renovations in 62 years–for the 1993 season, as the track was removed, the field was lowered and 14 rows of new seats were added.

USC’s first game in the renovated stadium took place on September 4, 1993, as the Trojans welcomed the Houston Cougars to Los Angeles for the first-ever meeting between the two programs.

The Trojans were coming off a disappointing loss to North Carolina and would go on to lose a heartbreaker to Penn State the following week, but on this date, USC absolutely walloped Houston, 49-7.

USC quarterback Rob Johnson and wide receiver Johnnie Morton hooked up 11 times for 146 yards in the first half, as Morton would go on to catch 15 passes for 180 yards and three scores in the game.

The 15 receptions set a new USC single-game record, surpassing the previous high of 14, set by John Jackson against Notre Dame in 1989. Ultimately in 1993, Morton would go on to set USC’s all-time career receptions record, finishing with 201–a mark that has since been broken six times.

There were a couple of interesting coaching notes in this game as well. This marked the first win for John Robinson in his second stint as USC head coach. And on the opposite sideline, Kim Helton–father of USC head coach Clay Helton–was coaching his first game as Houston’s head coach.

USC has played just three games on Sept. 4, so there aren’t many options here.

USC had been scheduled to take on Illinois in Moscow, USSR, in the Glasnost Bowl. The trip was scrapped about two months before it was to take place, due to scheduling difficulties, and held in Los Angeles instead.

USC held a 13-0 lead with just seven minutes remaining in the game, but Illinois caught a lucky break, when a Jeff George pass was nearly intercepted by a USC linebacker, but the ball deflected further downfield and into the hands of an Illini receiver, which turned into a 53-yard touchdown. Illinois then scored another touchdown with 2:19 left and the No. 22 Illini beat the No. 5 Trojans 14-13.

So the rules are bending here a little bit, as this is a date that hasn’t happened yet, and it’s also referencing an event that now will never happen. On Sept. 4, 2021, USC was scheduled to end its run of never having played an FCS opponent, as UC Davis was on USC’s future schedule for this date.

Instead, USC will now host San Jose State on Sept. 4 of next year, looking to run its record against the Spartans to 5-0 all time.

Previous “On This Dates”