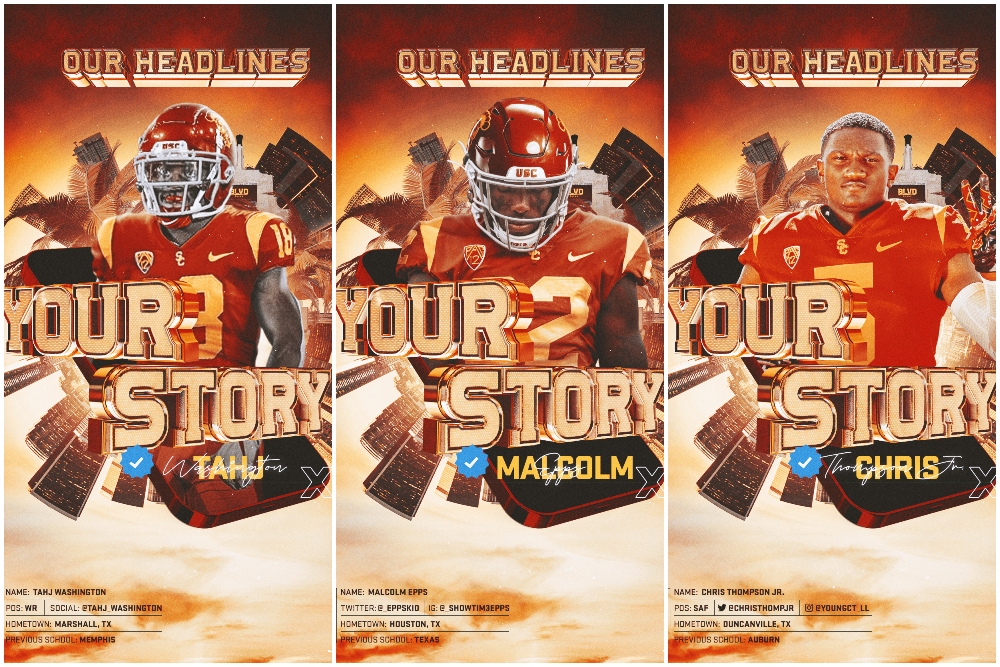 Washington, a 5-foot-11, 175-pound wide receiver who transferred from Memphis, announced his commitment to USC at the end of March. He was named to the Football Writers Association of America’s Freshman All-America team last year, in his redshirt freshman season, after catching 43 passes for 743 yards and six touchdowns. He also added 12 kickoff returns for 242 yards.

Epps announced his commitment to USC from Texas in early May. The 6-foot-5, 250-pound player was a tight end recruit but moved to outside receiver at Texas, then back to tight end. He could play the hybrid tight end/wide receiver role that Drake London was so successful in the past two seasons. Getting a player to step up in that spot could be important as the offensive staff looks to get London lined up outside more. Epps caught 20 passes for 232 yards and two touchdowns as a redshirt freshman wide receiver, but his production fell off when he was moved inside to tight end the following year.

Epps is the third former Texas player to land on the 2021 USC roster, joining running back Keaontay Ingram and safety Xavion Alford.

Thompson made his commitment to USC in mid-May, coming to the Trojans from Auburn. The 6-foot-2, 200-pound former four-star prospect took an official visit to USC while in high school but ultimately left his home state of Texas for Auburn. USC safeties coach Craig Naivar went hard after him while he was at Texas and will now get to coach him with the Trojans.

There could be opportunity for all three to play this season, but competition could be more fierce for all of them compared to Alabama transfer Ishmael Sopsher walking into a defensive tackle spot that is very thin, or Ingram adding to a running back spot that didn’t have a clear starter.

All could have multiple years left at USC. Thompson was only a true freshman last season, while Washington is entering his third year. Epps was a 2018 recruit, when he used his redshirt season, so he has at least two years potentially remaining.

These three bring USC’s transfer portal haul to seven, added to Ingram, Sopsher, Alford and former Colorado receiver K.D. Nixon. The Trojans have not addressed potential needs along the offensive line, and now could look along the defensive line with Jay Toia exploring other options, but the coaches likely aren’t done yet.

The three new receivers should help the passing game if quarterback Kedon Slovis is all the way back to his 2019 self and the offensive line gives him time to operate.

London is one of the best receivers in the conference and the country, and big steps forward are expected from Bru McCoy and Gary Bryant after more than a few flashes last season. Kyle Ford is on track to return from an ACL injury that cost him the entire 2020 season and John Jackson III is back for his third season. True freshman Michael Jackson III had a terrific spring ball and already looks like a real option this fall. USC adds Kyron Ware-Hudson and Joseph Manjack IV to the wide receiver room as true freshmen this fall.

Tight end has a number of intriguing options as well, and it will be up to Slovis and the USC coaches to find ways to utilize them in the passing game. Erik Krommenhoek and Josh Falo are back as seniors using their extra years and the hope is that Jude Wolfe and Ethan Rae can stay healthy after both heave dealt with multiple injuries during their USC careers. Both were limited during spring ball with Wolfe missing the entire thing. True freshman Lake McRee was very good during the spring, and incoming freshman Michael Trigg is a player the coaches are very high on and gives the Trojans a big, athletic body at tight end.

It’ll be interesting to see where Thompson ends up in terms of which safety position. He is a big hitter and could play a spot closer to the line of scrimmage, but he’ll need to be buttoned up in his man coverage to play the nickel spot. There was some shifting at the safety position this spring when Max Williams was lost for the season with a torn ACL. He was already filling in for Greg Johnson, who sat out while recovering from an injury. Isaiah Pola-Mao shifted to nickel while Alford stepped into the starting lineup, alongside Chase Williams. Johnson will look to get back as a starter at nickel, which would move Pola-Mao back to the spot he’s occupied the past few seasons.