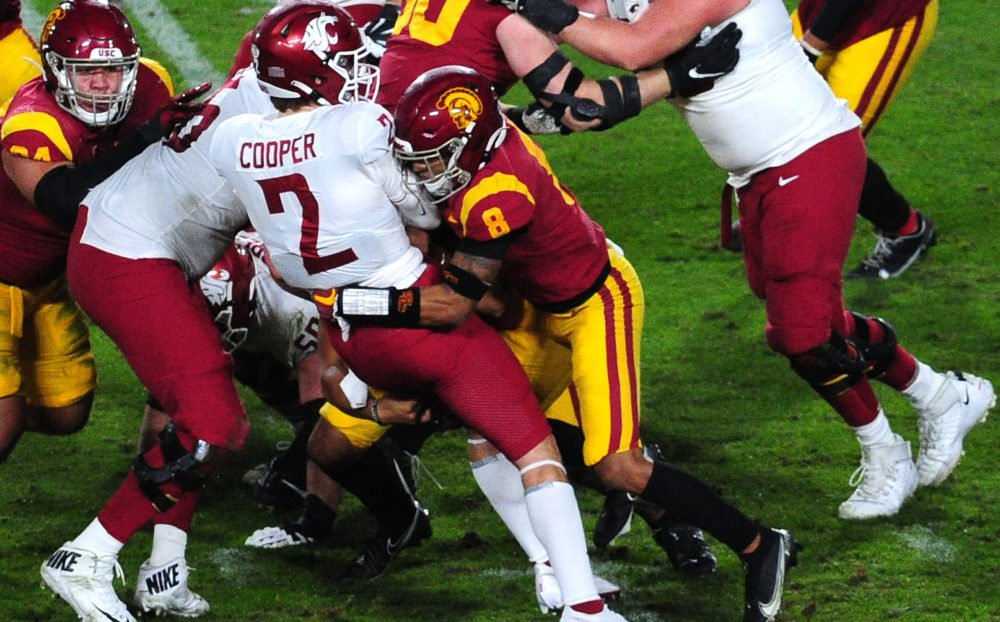 Moving into the defensive backfield with our position-by-position look at the USC roster, we look at what was expected and delivered in the 2020 season, and what comes next for the USC cornerbacks.

There wasn’t going to be a change in personnel between the 2019 and 2020 seasons, as USC brought back a top three cornerback group of Olaijah Griffin, Chris Steele and Isaac Taylor-Stuart. That trio would be backed up by several members of the 2019 recruiting class — Dorian Hewett, Adonis Otey and Jayden Williams — and flanked by nickelbacks Greg Johnson and Max Williams.

There was, however, going to be a change in the look of things, as new cornerbacks coach Donte Williams employed field and boundary corners rather than right and left, asking the corners to flip sides depending on where the ball is spotted.

Griffin and Steele were very much expected to be the first two up and there were questions as to just how ready Taylor-Stuart would be following a knee injury he suffered late in the Holiday Bowl loss.

Ultimately, USC would enter the 2020 season with questions as to just how good this group would be. The Trojans have had some up and down results at cornerback in recent seasons, as they’ve dealt with some big passing games, a number of penalties and some issues with containment in the run game.

It wasn’t spectacular, but USC absolutely got enough out of the tandem of Steele and Griffin, who handled virtually every snap at the two corner positions. As a whole, USC allowed its fewest passing yards per game since the 2013 season. Steele finished as a Second Team All-Pac-12 performer, while Griffin was Honorable Mention and Pro Football Focus’ No. 3 cornerback in the conference.

Steele allowed just 11 receptions on the season, while Griffin had 22 tackles and four pass deflections. Both recorded an interception. Yes, there were some penalties, but overall the play USC got here was solid and certainly didn’t cost them any games or put the defense in overly difficult situations. Williams was tough, physical, man-to-man coverage from his corners and he got it.

Taylor-Stuart did play in all six games, but had just five tackles and didn’t really seem to push the two starters ahead of him. USC got very limited defensive production from the young cornerbacks, though they did play some on special teams.

The nickelbacks — Greg Johnson and Max Williams — were lumped in with the safeties in this Todd Orlando defense, so they’ll be covered in that edition.

USC has to find a replacement for Griffin, who opted to declare early for the 2021 NFL Draft. Taylor-Stuart would seem to be the first man up, as he’s the veteran of the group. It will be interesting to see if Williams chooses to take a look at either Max Williams or Greg Johnson on the outside. And then there’s the question if whether that group of 2019 cornerbacks can fend off the incoming 2021 crew on the depth chart.

Otey, Hewett and Jayden Williams have the experience of two years at USC now, but they weren’t the recruiting wins that four-star cornerbacks Ceyair Wright, Prophet Brown and Jaylin Smith were. It wouldn’t be surprising to see Wright and Brown get opportunities to push into the two-deep and see time as true freshmen if they are up to the task physically.

As for what’s beyond 2021, USC recently grabbed a commitment from 2022 four-star cornerback Fabian Ross (Las Vegas/Bishop Gorman) and remains strongly in the mix for five-star cornerback Domani Jackson.