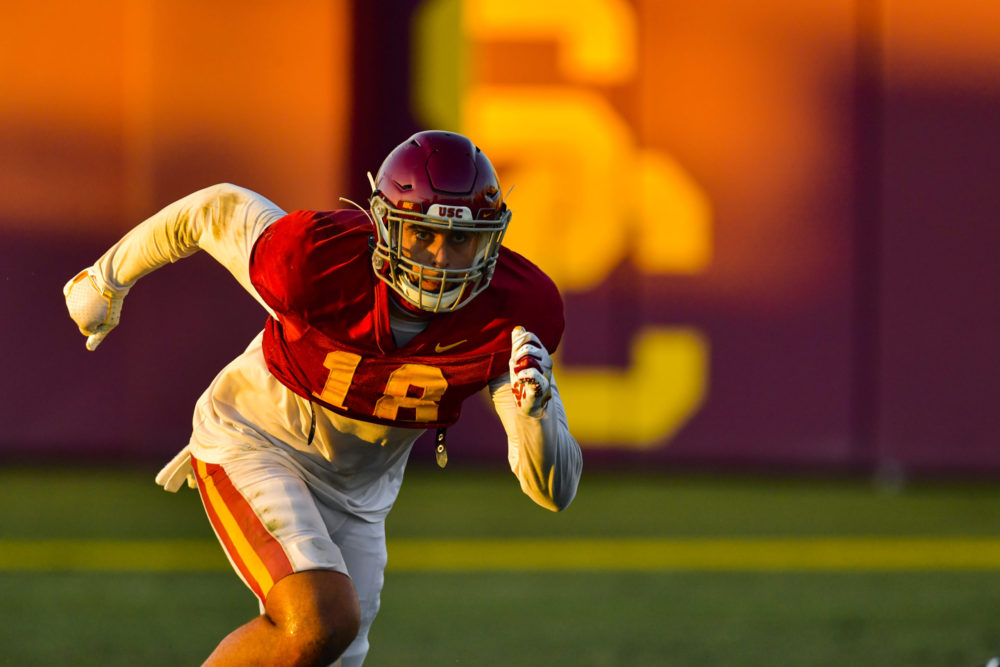 The tight ends are the next stop on our position-by-position look through the USC roster, at what was expected and delivered in the 2020 season, as well as what comes next.

The tight end position has pretty much officially been blurred into a hybrid tight end/big receiver position, as Drake London hasn’t been lumped in with the tight ends as far the roster goes, but he’s the guy the coaches point to when recruiting future tight ends.

But there was a lot of talk this offseason that the other available tight ends on the roster — Erik Krommenhoek, Josh Falo and Jude Wolfe — would see far more time this season than last year, when they combined for just 15 receptions in a full season. It was also worth watching whether Ethan Rae would be able to fully recover from the knee injury that kept him sidelined for his true freshman season.

Wolfe brought some excitement with him, as he looked very good as a true freshman early enrollee in the spring of 2019 before a back injury limited him and then he was held to limited involvement in just a handful of games last fall. There was a growing thought that he could be a much bigger part of the offense this season and that the traditional tight ends would play a bigger role. It was difficult to believe that the tight ends would suddenly become a driving force of the offense with the players coming back at wide receiver and running back, but the Trojans needed to get something more out of the position than they got in 2019.

If you lump London in with the tight ends, the position looks extremely productive. But it’s still difficult to truly count London as a tight end on this roster because he doesn’t quite give the Trojans enough in the box when it comes to the running game.

Looking at the players listed at tight end, Erik Krommenhoek had nine receptions for 59 yards and two touchdowns, while Wolfe had two catches for five yards. Falo didn’t see action until very late in the season and Rae sat out the season while still recovering from his injury.

The tight ends were on the field a lot more than they were in 2019 early in the season, but unfortunately Wolfe dealt with some nagging injuries again until his year was cut short by a broken bone in his foot. Before the injury, we did see more two tight end sets and a reliance on having Krommenhoek or Wolfe, or both, out there pretty consistently.

There are plenty of questions with this position moving forward. Whether or not London counts as a tight end or wide receiver matters way less than the fact that USC isn’t getting typical production out of the position in the running game. Often when the Trojans can’t pick up a short-yardage third down with the run, it’s because they aren’t getting that key block on the edge. When it works well, it works really well, like with Stephen Carr’s long run against Arizona.

But it’s clear that the Trojans are okay tilting this position much more toward pass catching than run blocking.

The two tight ends signed in the 2021 class, Michael Trigg and Lake McRee, lined up out wide far more often than not and were far more likely to be targeted as receivers and relied on as blockers. The coaches recruited both using London as a blueprint for what the tight end position can be at USC.

It’ll be interesting to see the decisions coming from Krommenhoek and Falo, both seniors with the ability to return for another season. The future of the position has felt like it would belong to Wolfe and Rae since both signed with the Trojans in the 2019 class, but neither has been consistently healthy enough to see the field at 100% for long stretches (for Rae, not at all). Still, it’s clear that having those two plus the two new additions means this position is in good shape as far as ability and potential.

How the tight end position is utilized and how much help it can provide in the running game will be key questions for 2021.