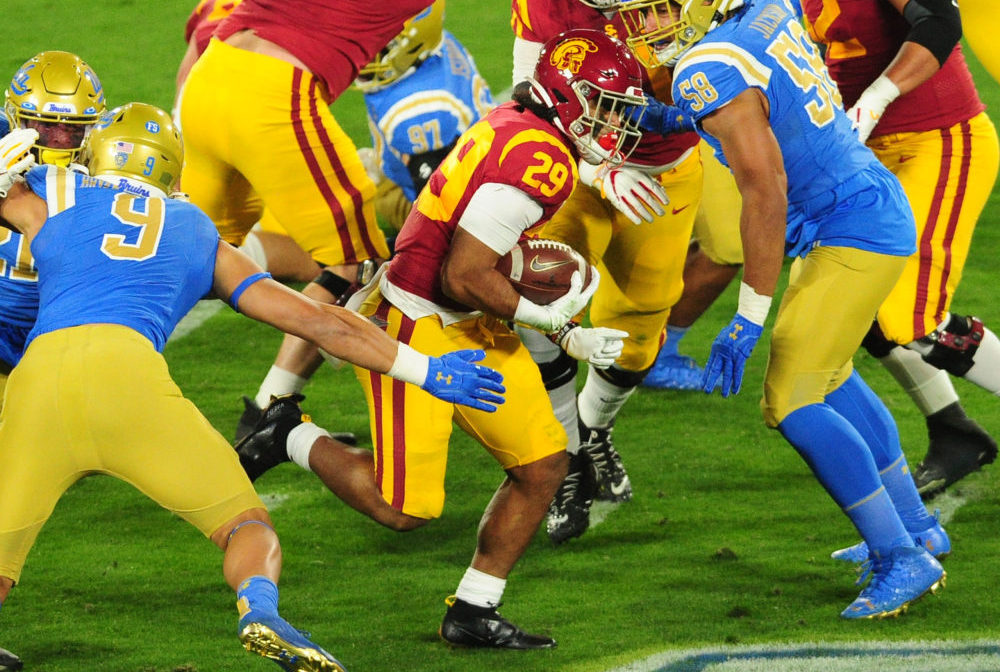 Continuing our position-by-position look at what was expected, what was delivered and what comes next for the USC Trojans, we move to the running back spot.

Coming into the 2020 season, the USC Trojans had four tailbacks capable of playing significant minutes, though there were significant durability concerns.

Vavae Malepeai, Stephen Carr, Markese Stepp and Kenan Christon all took their turn as the Trojans’ lead back during the 2019 season. But none of the four played in more than 10 of USC’s 13 games last year and Malepeai led the group with just 105 carries, 503 yards and six touchdowns.

Stepp was dealing with a lingering ankle injury, but it was expected that he would enter the season fully healthy and potentially jump toward the front of the line. Malepeai looked as though he’d be fully healthy following a knee injury that sidelined him for some of last season.

Head coach Clay Helton and offensive coordinator Graham Harrell spoke before the season about working some two-back sets into the offense in order to get a few backs on the field at the same time because of the talent that existed back there. There was also plenty of talk about how important the run game would be this season.

Injuries again became a story for this group, as Malepeai and Stepp both dealt with some nagging issues. Carr was the only one to play in all six games, while the other three missed one each. The performance overall wasn’t as bad as the statistics indicate, because sack totals are factored into rushing numbers, but it was not a good year for the tailbacks and the running game in general.

The Trojans have now rushed for fewer than 100 yards total in seven of their last 11 games.

Malepeai led the team with 54 carries for 238 yards. Carr finished with 176 yards on 46 carries and Stepp had 165 yards on 45 carries. Stepp and Malepeai both had three rushing touchdowns, while Malepeai had two.

Christon had just 10 carries for 70 yards, but 47 of those came on one carry against Utah. Combined, the four backs averaged 4.2 yards per carry, a bit better than USC’s 3.2 yards per carry as a team.

We did see some two-back sets on occasion, but it never became a potent part of the offense. And USC running backs were part of the passing game against Arizona State in the season opener — Helton several times mentioned the 11 total receptions for the position against the Sun Devils — but the group had just 20 catches combined over the next five games.

It’s difficult to imagine that there could be more questions about a position group than there are with the USC running backs right now. It starts with the two seniors, as both Carr and Malepeai could have the option to return for another season as the NCAA announced an eligibility freeze for this season, giving both another year of eligibility. It’s unlikely that either would be high draft picks if they left right now, but it’s also possible that both have shown enough in spurts to at least got a shot somewhere in the NFL. They’ll likely need to weigh the decision against the potential of another college injury next season.

The return status of USC’s top three tailbacks might be up in the air, as Stepp could hope that he jumps to the top of the tailback group next year or potentially take a look at other opportunities through the transfer portal. He’s looked like a potential break-out candidate each of the past two seasons, but has dealt with injury issues and some scheme fit, as the veteran backs are regarded as better overall pass blockers.

And what is Christon’s long-term role in the offense? It’s understandable that he was brought along slowly this year behind three veterans after he was rushed into playing more than anybody anticipated last season. But if he’s ready to go next season, can the offense find a way to utilize him to his full potential as a true speed threat and gamebreaker?

No matter who does or doesn’t come back next season, the Trojans will add a talented back this spring in four-star signee Brandon Campbell. He’s someone the Trojans targeted early and then held on to all the way through the process. He brings dual-threat ability as a runner and receiver and should be a good fit for this offense, though obviously his pass blocking ability will be tested early in his career. The Trojans are in the mix to add a second back in the 2021 recruiting class, as three-star Texas prospect Alton McCaskill remains uncommitted.

But beyond just the players filling roster spots on the team, questions remain about how this group will be utilized and what the Trojans can realistically expect to get out of this position. Helton has talked about needing to pair an elite passing game with at least 165 yards rushing per game, but the Trojans have only hit the rushing yard number seven times their last 19 games.