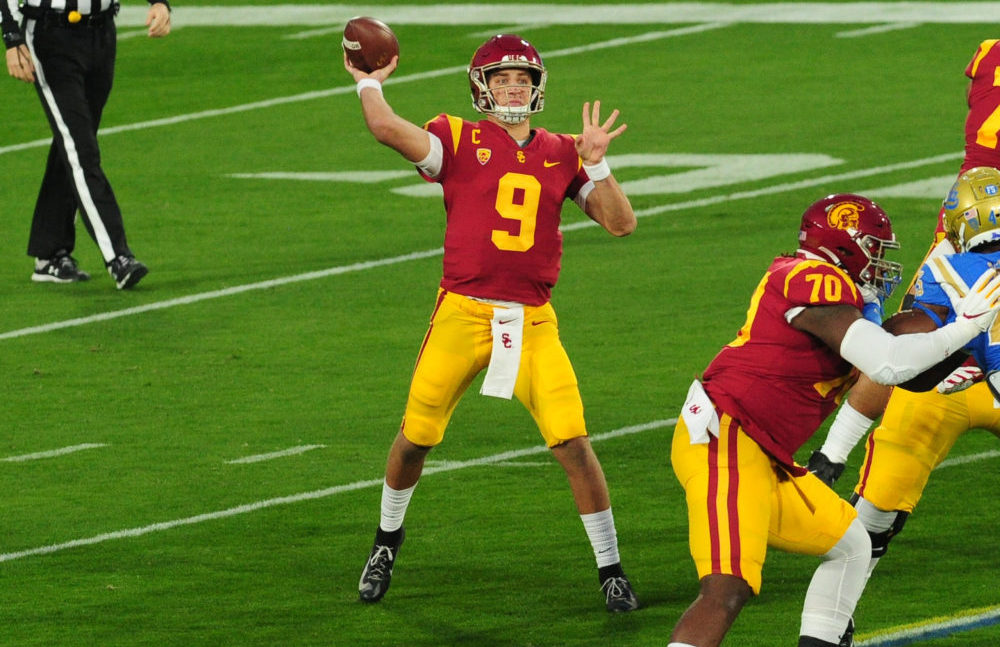 Following the 2020 season, WeAreSC is going through the roster position by position to look at what was expected coming into the year, what was produced during it, and what the future of the position looks like moving forward.

Today, we start at quarterback.

The position got some clarity when J.T. Daniels announced he would transfer from USC to Georgia, clearing the way for Kedon Slovis to take full control of the position without a true challenger. Slovis became one of college football’s major surprises in 2019, when he turned in a phenomenal true freshman season. Expectations for him in Year 2 of Graham Harrell’s Air Raid offense were off the charts after he completed nearly 72% of his passes for 3,502 yards and 30 touchdowns against nine interceptions.

Matt Fink returned as a capable backup, and while it wasn’t expected that he would push Slovis for the starting spot, he proved against Utah last year that the offense wouldn’t fall apart if he was called upon. Without a third scholarship quarterback after both Daniels and Jack Sears transferred out, USC welcomed in grad transfer walk-on Mo Hasan from Vanderbilt.

Slovis would return to full health from an elbow injury that knocked him out of the Holiday Bowl against Iowa and be the centerpiece of the Pac-12’s best offense.

Slovis had some terrific moments in 2020, but it felt like a small step back in his sophomore season. Against Arizona State there were a few throws where the ball came out of his hand wobbly, though largely on target. Against Arizona, the shaky passes continued and some passes were nowhere near the intended receiver. Conversation about what ailed Slovis dominated the week, with he, head coach Clay Helton and offensive coordinator Graham Harrell all providing different evaluations. Slovis initially said his mechanics were off. Helton said it was due to slick footballs and wind. Harrell said it could have been one slick ball and then a mental issue.

Whatever the case, Slovis threw the ball better the rest of the season, but there were still a handful of non-spirals in subsequent games — some that made their way to receivers and some that didn’t. Against Washington State, Slovis missed badly on a third-down pass to Tyler Vaughns as the ball sailed way high and outside. Against UCLA, a fairly easy pass over the middle to Amon-Ra St. Brown on third down wobbled awkwardly and wound up bouncing through his hands and resulted in an interception. And on one of the biggest plays of the season, Slovis attempted to throw the ball away against Oregon to keep a potential game-tying or winning drive alive and threw an interception along the sideline. Helton said he thought the ball slipped out of Slovis’ hand.

There was never any serious talk from Slovis or the coaches that an injury from last year was lingering and causing the throwing issues, but it’s also somewhat difficult to believe that Slovis simply forgot how to throw spirals at times or consistently couldn’t find a ball that came out of his hand normally. What adds intrigue is that between some of those throws, the ball came out completely fine and Slovis at times looked better than he did last year.

On the season, Slovis completed 67 percent of his passes for 1,921 yards and 17 touchdowns against seven interceptions. After throwing for more than 400 yards in four games last year, Slovis didn’t do it once against a watered-down schedule in 2020, and his worst game of the season came in the conference championship game, where he completed just 54% of his throws for 320 yards and two touchdowns, but a season-high three interceptions.

There were streaks of brilliance to be sure, like a five-touchdown half against Washington State and some big-time throws against UCLA. But Slovis was sacked three times in five of the six games this season and harassed constantly by Oregon.

The season finished with Slovis laying on the ground along the Oregon sideline while the Ducks celebrated on the Coliseum field. He was thrown to the ground while unable to get off a Hail Mary at the game’s conclusion and suffered an injury that required X-rays and would have kept him out of any bowl game had the Trojans elected to participate in one.

Depending on the severity of the injury, Slovis may or may not be available for spring ball, which would make things extremely interesting for the Trojans.

Fink is eligible to return to the Trojans next season as the NCAA has granted a free year of eligibility for all student-athletes. Hasan has indicated he will return, but there hasn’t been any concrete word from the other seniors who would have had their eligibility expire in a normal season.

One major development occurred on the first day of the recent early signing period, as USC signed two four-star quarterbacks in Miller Moss and Jaxson Dart, who will both join the Trojans this spring as early enrollees. Those two will battle to replace Slovis once he elects to head off for the NFL. That competition should start the moment they arrive on campus and while neither would be expected to supplant Slovis or play extensive minutes in 2022, the pecking order that develops throughout spring ball will be fascinating to watch.

Beyond that, the Trojans have had Slovis for two years now and in both seasons he’s been knocked out of games. So if Fink elects not to return, there’s a good chance that one of the true freshmen could actually be called upon next season.

Ultimately, while Slovis had a few bumps in the road this fall, USC has to feel like they’re in good hands at the position with Slovis heading into his junior season. He’s an extremely talented quarterback who can be one of the nation’s elite if given enough time in the pocket.