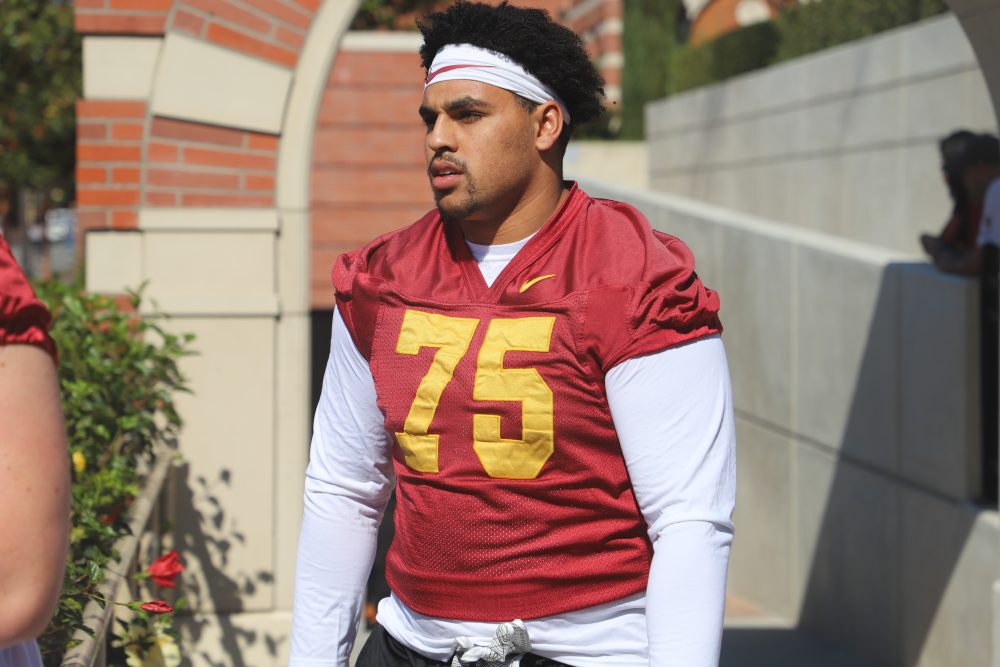 Despite everything happening on the defensive side of the ball, potentially the best quarterback in the conference taking snaps for the offense and a deep group of talented receivers running routes for 15 practices, no position was going to be more interesting to watch during spring ball than the offensive line.

USC had two holes that needed filling on the line, as left tackle Austin Jackson and right tackle Drew Richmond were off to the NFL. But the Trojans also had an opportunity to do some shifting along the line, and that’s exactly what ended up happening.

In that first and only practice of spring ball, Alijah Vera-Tucker moved out to left tackle from his typical left guard spot, and Justin Dedich moved into the starting role at left guard, freeing him from operating solely as a backup to center Brett Neilon. The Trojans went with Liam Jimmons at right guard and Jason Rodriguez at right tackle, though Jalen McKenzie, who missed that practice as he had class, would likely figure into the mix at one of those two spots.

The USC coaches talked about wanting to get their best five guys on the field, and this spring was going to provide an extended opportunity to get a really good look at what that lineup might be. It was fairly clear that they’d like to give Alijah-Tucker all the opportunity he needs in order to lock that left tackle spot up. He has the physical and mental ability to get that done, but there were a couple reps in that first practice that showed he’ll need to spend some time there in order to become fully accustomed to the nuances of the position.

Having a center at left guard in Dedich should help the entire line, and getting a returning center in Neilon should be a bonus for whatever players wind up stepping into those tackle spots.

But this spring was going to offer a really good look at what might happen on the right side of that line, and specifically to see if Rodriguez was ready to step up as a starter or at least a valuable sixth man for the line. Liam Douglass could be included in that conversation as well, as the redshirt sophomore has that look of a player who steadily matures over the course of his career and ultimately contributes regularly.

What we’re really missing with this offensive line was a chance to see them go up against what promised to be a physical, attacking defense. From a defensive line that had a fire lit under it by new defensive line coach Vic So’oto, to a scheme that can present problems for a line in terms of picking up pressure from various back-seven defenders, the offensive line was not going to have an easy go of things this spring as it figured itself out. And ultimately, that should have been something that benefitted an offense, and a team, hoping to establish itself as one of the Pac-12’s best this season.

And just a notch below the current team in terms of importance, no spring ball means no recruiting visits, unofficially or officially. Last season, USC hosted Richmond on a visit during spring ball. That trip obviously impacted him enough that he eventually committed to USC. The Trojans have offered at least two graduate transfer offensive linemen in this class–Akron’s Brandon Council and Hampton’s KJ Wilson–but both attended high school in North Carolina and an official visit to USC to take in spring ball could have been eye-opening.

Similarly, USC will bring six new offensive linemen into the fold this fall, and there will be plenty of space on the two-deep for someone to make an impression. Last spring, wide receiver Drake London was at virtually every single practice as an involved spectator, so it was no surprise when he was able to make a very quick impact once he could actually get involved in the fall. Four-star offensive lineman Jonah Monheim was in attendance at the first practice, and certainly he would have benefitted from those 14 more practices, even from the sidelines.

Continuing our series of how a postponed spring ball affects each position group:
Quarterback
Running back
Wide receiver
Tight end