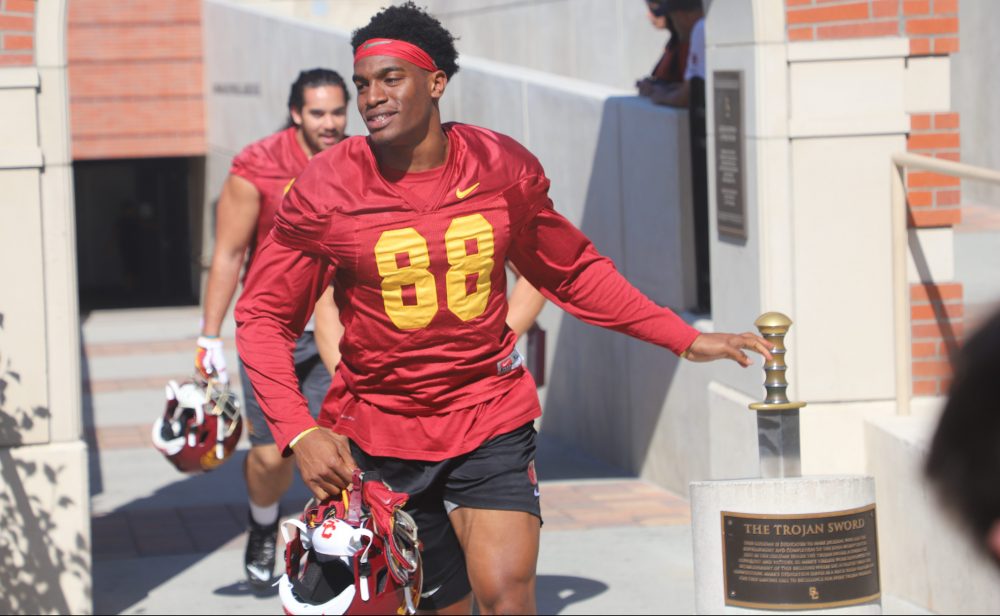 You’ve heard the stat. USC tight ends caught just 15 passes during the 2019 season. And while it was about on par with the 17 receptions for Trojan tight ends in 2018, those two more receptions came on 113 fewer pass attempts.

Moving away from targeting the tight end was noticeable last season, but it didn’t appear to be by design when offensive coordinator Graham Harrell took over the USC offense. Last spring, we saw plenty of targets headed toward Josh Falo, Erik Krommenhoek and Jude Wolfe, who all turned in very productive spring ball performances–Wolfe’s was cut short due to injury.

But that spring, USC didn’t have wide receiver Drake London on the field. And when London arrived in the fall, he made an immediate impression, eventually convincing the USC offensive staff that they’d be more productive employing a fourth wide receiver most often, rather than moving a tight end around the formation.

But looking back at Harrell’s time at North Texas, he worked with a tight end very often, as Mean Green tight end Kelvin Smith caught 56 passes for 533 yards over the 2017 and 2018 seasons.

Considering what we saw last spring, and then how things developed during the fall, I honestly don’t know what spring ball was going to tell us about the tight end position.

What was plainly obvious in just one day was how big of an impact the return of Daniel Imatorbhebhe could make on the position and the offense. With his size and veteran presence, USC has a tight end who can truly do it all in this offense, and potentially a difference-maker at the position.

Quarterback Kedon Slovis and head coach Clay Helton beamed when discussing the return of Imatorbhebhe. He looked fully healthy during the one non-padded day of practice, and if spring ball was only going to be about getting to watch him back on the field for 15 practices, that’s reason enough to be frustrated about postponing and potentially canceling it.

Getting another full look at Wolfe would have been fun, as he and Ethan Rae are the future of the position after this year, and perhaps even as early as this season, though Rae is still coming back from injury.

USC was going to throw the ball around a lot this spring, as is natural for an Air Raid offense, so the tight ends were going to be on the receiving end of more than a few passes.

What would have been very interesting to see is how they responded to what felt like a clear challenge from both Harrell and new tight ends coach John David Baker, who said it was up to the tight ends to force their way onto the field.

This is a terrific group of wide receivers, and adding a healthy Kyle Ford and Bru McCoy to the mix, along with true freshmen Gary Bryant and Joshua Jackson, only makes the group more potent. But dealing without Amon-Ra St. Brown–out recovering from a sports hernia surgery–and London–out while playing with the basketball team–might have given the tight ends a few extra opportunities to state their case this spring.

The USC offense should be potent enough that it can score against anybody in the Pac-12 provided the group comes into the game relatively healthy. But if there is a book being written among Pac-12 defenses based on what they saw last year, utilizing the tight end more this season could be one of the counter punches Harrell and the Trojans have at their disposal.

This continues our position-by-position look at what we’re missing out on by the postponement of spring ball. Previous entries:
Quarterback
Running back
Wide receiver