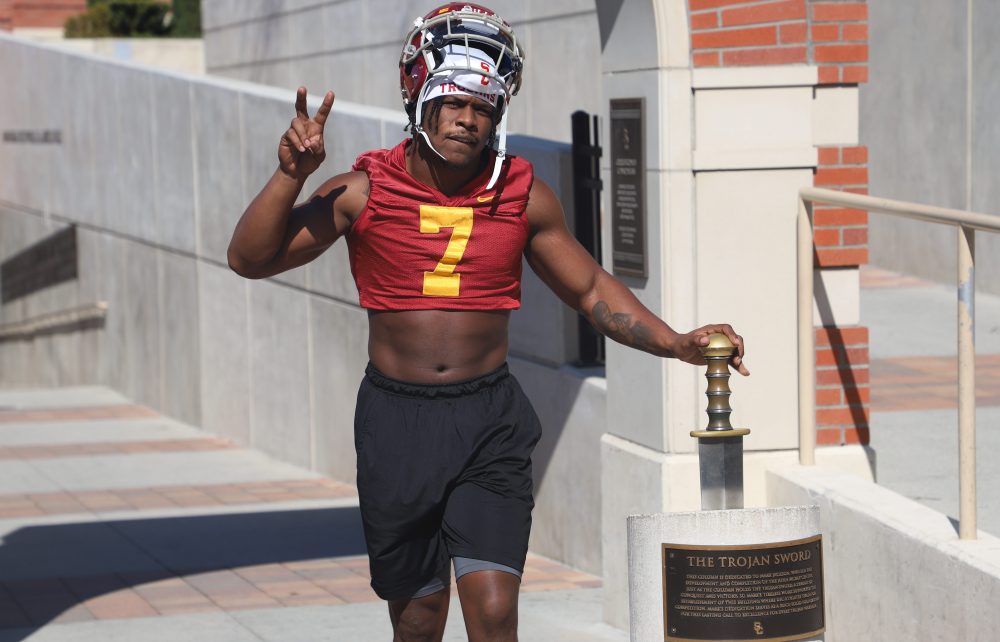 Missing out on spring football practice doesn’t really compare to the serious issue facing the world as it looks to stop the spread of COVID-19. But it could still have a fairly significant effect on the program and the 2020 USC Trojan football season. In this series, we’ll take a position-by-position look at what exactly missing spring ball could mean for the Trojans, moving on to the running backs.

Markese Stepp was not going to participate in spring practice due to the ankle injury he suffered against Arizona last season. Head coach Clay Helton said there were no issues with his recovery, but allowing a 230-pound running back to fully heal from that kind of injury was going to take some time.

Vavae Malepeai was possibly set to miss spring as well, as he continues to recovery from a meniscus injury. His leg was in a brace for the first day of practice, though he did a little work on the side with a trainer. Helton said after the first day of spring ball that he was still a ways away from returning.

The running back who likely stood to gain the most from spring ball, Kenan Christon, was set to miss it while he concentrated on track this spring. Christon got more playing time than anybody expected last fall, but we weren’t going to get to see him on Howard Jones/Brian Kennedy Field this spring.

That left the duo of Stephen Carr and former walk-on Quincy Jountti as the healthy tailbacks this spring, and we probably weren’t really going to gain anything watching them. The biggest question regarding Carr is always going to be his health, and while we would have gotten an extended opportunity to see how he looked in that regard heading into his senior season, it’s unlikely Helton and the offensive staff were going to repeatedly launch him into a defense promising violence and physically for eight tackle practices.

That means we might have seen a healthy dose of former walk-on Quincy Jountti and current walk-on Ben Easington this spring, provided they remained healthy. Jountti did some heavy lifting last spring, proving enough to be rewarded with a scholarship. He’s a talented back who would probably play far more snaps at several other Pac-12 programs.

The biggest unanswered question that the postponement/cancelation of spring brings is how the coaching staff was planning to use a depleted running back depth chart in a spring where they were promising tough, physical practices by the defense. Carr never shies away from contact in these situations, but could the staff afford to leave him open to hits on a consistent basis? How prominent was the running game going to be featured over 15 practices? Was the defense going to work more on rallying to the ball outside, tackling receivers in space, and allowing battles up front solely between big men to develop the offensive and defensive lines?

That aspect of the running back position was going to be very interesting to watch this spring, as both Helton and offensive coordinator Graham Harrell have talked about wanting to increase production in the running game, but a lack of healthy bodies there sure makes it difficult. But it’s tough to get tougher without working between the tackles during practice.

Now, we’ll need to wait to see what happens during fall camp, when the Trojans should have a very healthy contingent of backs ready to carry the load for what hopes to be a more potent running game in 2020.