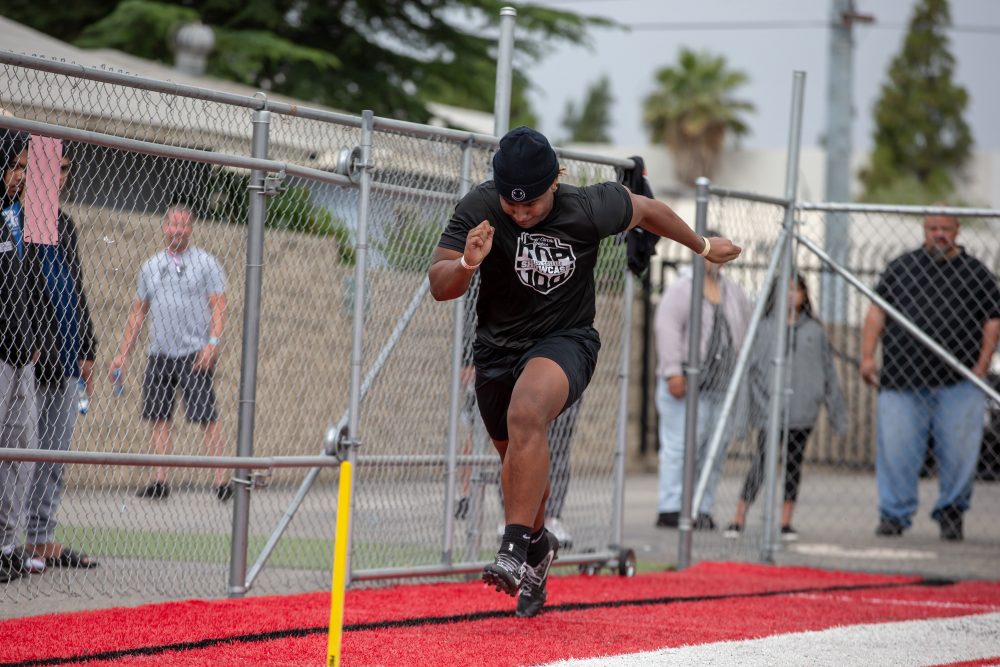 USC’s quiet recruiting run continues, as the Trojans are without a commitment since mid-July. Though, things might start to pick up for the 2022 class with an important date this week. Elsewhere, the Trojans extended an offer to a massive 2023 prospect and saw a 2021 cornerback commit elsewhere, and the top offensive and defensive targets were both on display in different ways.

September 1 each year marks the first day coaches are able to send written correspondence and private messages to juniors, so that day often shows who the real top targets are for each school.

It’s also a day for the video and graphics department, as they get to show off the new productions that get sent out to an entirely new group of recruits.

Last last month, we took a look at some of the must-get 2022 recruits for USC, as those guys will undoubtedly be hearing from the Trojans tomorrow.

A big offer to a big sophomore

The Trojans have sent out a few offers to some big-time national prospects in the 2023 class, and USC added another one to that list last week.

Kirkland adds the USC offer to ones from plenty of national recruiting powers, including Florida, Georgia, LSU, Ohio State, Oklahoma, Tennessee and others.

The Trojans only have a small handful of offers out to 2023 offensive linemen, though there is a top target much closer to home, in potential five-star two-way lineman Francis Mauigoa (San Bernardino, Calif./Aquinas).

There is room for maybe a couple more back there and USC had been considered one of the leaders for four-star cornerback Nathaniel Wiggins (Atlanta/Westlake). With the dead period continually extended–it now runs through September–Wiggins wasn’t able to visit USC this summer and his late-August commitment date has come and gone, with LSU coming out as the big winner.

The 6-foot-2, 170-pound Wiggins has seen his recruiting stock skyrocket over the past several months and he now checks in as the nation’s No. 117 overall player.

For USC, this makes local cornerback Ceyair Wright (Los Angeles/Loyola) even more of a priority. Landing the 6-foot-1, 175-pound Wright, the nation’s No. 69 overall prospect and No. 5 cornerback, would give USC a tremendous class of defensive backs–especially when it comes to grabbing the best in the state. But Wright is also looking at schools such as Arizona State, Michigan, Nebraska, Notre Dame, Oregon, Stanford, Utah and others.

Kingsley on the field

Not many USC targets will be taking part in high school football this fall, but one guy who has been in action just happens to be one of the most important targets on the board for the Trojans.

Offensive tackle Kingsley Suamataia (Orem, Utah/Orem) is the nation’s No. 59 overall prospect and the one remaining offensive target who could make the biggest impact on that side of the ball for this class.

The 6-foot-5, 280-pound offensive tackle has taken part in a few games already and his senior year film is clearly going to live up to the recruiting hype. It only takes one or two snaps to see the tremendous quickness and fluidity he plays with.

Oregon has been the runaway leader for a long time in Suamataia’s commitment, with his close relationship to the Ducks’ coaches and to the Sewell brothers–linebacker Noah and offensive tackle Penei. But USC isn’t going to give up in this race and the Trojans have been a constant and consistent presence.

While recruiting is still in a dead period, that hasn’t stopped some prospects from organizing trips to schools. These “unofficial” unofficial visits can’t include any of the typical events recruits would experience on a regular visit, as coaches and staff aren’t allowed to be involved in any capacity.

Oklahoma quarterback commit Caleb Williams (Washington D.C./Gonzaga) put together what he called the “Sooner Summit,” where a dozen or so Oklahoma commits and targets spent several days in Norman bonding.

That group didn’t concern USC much, but that’s not true of a pair of prospects who recently visited Georgia, in Korey Foreman (Corona, Calif./Centennial) and Maason Smith (Houma, La./Terrebonne).

There’s no mistaking that Foreman is the biggest remaining uncommitted target for USC in this class. He’s the nation’s No. 1 prospect and plays a premium position in that hybrid defensive end/outside linebacker. This is going to be a real test for this new defensive staff, as once again USC has a premier defensive prospect in its backyard. In the 2019 class, there was defensive end Kayvon Thibodeaux. And in the 2020 class, it was linebacker Justin Flowe. Both are now at Oregon.

The Ducks are in the mix for Foreman as well, but it’s the SEC schools that are seemingly increasingly becoming a problem for the Trojans. Foreman and Smith have a very strong friendship and neither has shied away from the fact that they would very much like to play together in college.

Foreman is also close with USC’s Drake Jackson, his former high school teammate. But those two would likely get just one year together in college, if Jackson continues his strong play and makes himself available for the NFL Draft after three seasons. Foreman and Smith would likely have three years together at minimum.

As a Louisiana prospect, LSU is heavily in the mix for Smith. And while he has included USC on his top lists of schools, it’s difficult to see him leaving the South. Georgia continues to make noise for both prospects, and Foreman following through on that trip can’t be seen as a good thing as far as USC is concerned.

There could still be plenty of time before Foreman announces, but if Georgia and the rest of the SEC are able to play this fall, and the recruiting dead period ends, allowing Foreman to take an actual official (or even unofficial) visit to Athens, the fight could get even tougher for the Trojans.