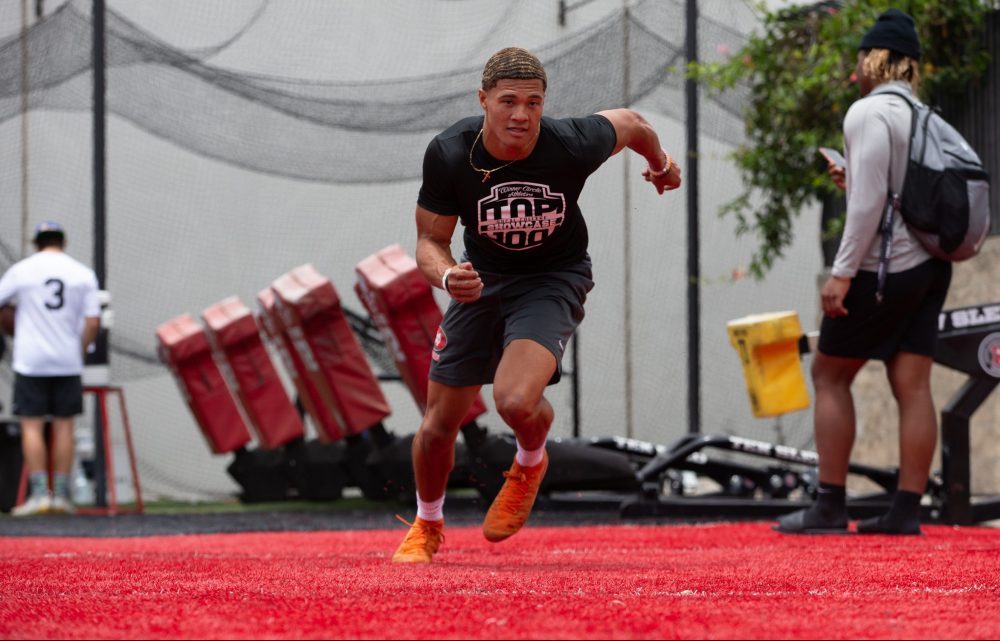 There is plenty of time left in the 2021 recruiting cycle, as the early signing period is still roughly five months away. But it’s never too early to start working on the next class.

USC coaches have set themselves up to put a strong finish together for the 2021 class, which already sits among the top ten in the country. The thought now is that with a solid 2020 season combined with a continued aggressive approach on the recruiting trail, the Trojans should be able to haul in a tremendously talented 2022 class.

There are always some out-of-state surprises or prospects not on the radar now who blossom as juniors and into their senior seasons. But at this point there are a few prospects (or ideas of prospects) who rank as must-gets for USC, if the Trojans are going to continue to distance themselves from the rest of the Pac-12 and start getting some separation from Oregon on the recruiting trail.

Jackson is the nation’s No. 4 overall recruit and the No. 1 prospect in California. USC is firmly in the mix for No. 1 prospect Korey Foreman (Corona, Calif./Centennial) in the 2021 class, but the Trojans missed out on California’s top-ranked recruit in both the 2019 and 2020 classes. Signing Foreman is obviously the biggest item on the to-do list in the current class, but grabbing Jackson–who has USC among his top schools–will be of similar importance come next year.

He has a 6-foot-1, 185-pound frame and looks like he could be headed to college this fall. He’s a phenomenal athlete and possesses true speed and quickness. He’s the kind of Southern California prospect USC has to get if it is going to own the region when it comes to recruiting and routinely challenge for conference and national titles.

Clemson and Michigan are a couple schools to watch for Jackson, but USC will likely be in it for him until the end.

The Trojans have offered a number of the top quarterbacks in the 2022 class, and while it might not look like a major need given that USC has commitments from two signal-callers in the 2021 class, it’s imperative that Clay Helton and Graham Harrell sign one in the 2022 class as well.

Following the 2020 season, Matt Fink will have exhausted his eligibility, leaving Kedon Slovis in his third season, and Jake Garcia and Miller Moss in their first. If Slovis leaves early for the NFL Draft following the 2021 season, the 2022 signee could be the de facto No. 3 quarterback–and potentially No. 2 if there is a transfer.

All three are four-star prospects and very talented. USC can’t afford to let them all head elsewhere, unless the Trojans are able to go elsewhere for a big-time prospect.

While USC has a few intriguing young linemen, the Trojans have got to find a way to get back to bringing in elite offensive linemen, especially from their own backyard. While the Trojans are still capitalizing on a great 2017 offensive line class, the huge misses–Oregon’s Penei Sewell in 2018 and Ohio State’s Wyatt Davis in 2017–have become two of the best offensive linemen and players in general, in college football.

When Greene enters, that 2017 class–Austin Jackson, Alijah Vera-Tucker, Brett Neilon, Andrew Vorhees and Jalen McKenzie–will be finished with their USC careers and there should be some opportunity for playing time for a guy in Greene who could play either tackle or guard spots along the line.

A top-five player in California, Turner-Gooden is a 6-foot, 180-pound athlete capable of playing wide receiver or safety at the next level. He’s similar to some of the guys in this 2021 defensive back class in that he has some positional versatility and he’s simply a guy who loves to hit and play football.

He’s picked up some major offers since May, as Alabama, Clemson, Georgia and Oklahoma are some of the programs who have jumped into the mix. But the Trojans should be a strong contender, as Turner-Gooden has a very strong relationship with Offensive Quality Control Analyst Chris Claiborne, who served as Turner-Gooden’s head coach at Calabasas.

He’s the nation’s No. 42 overall prospect and a recruit who very much fits into the must-get category if the Trojans are to continue with the narrative of taking back the West. Despite a big defensive back haul in this 2021 class, the safety position will still need to be stocked with the 2022 group as well.

The 6-foot-3, 220-pound outside linebacker is part of a loaded Mater Dei defense this year and should have a chance to put together a huge junior season. He holds offers from Alabama, LSU, Michigan, Oklahoma, Stanford USC and others, but the Trojans have made a strong early impression.

He’s someone who can rush the passer and drop into coverage and would seemingly fit well in USC defensive coordinator Todd Orlando’s defense.

While USC hasn’t exactly been shut out of Mater Dei in recent years, the pipeline that had always been so strong is weakening. In this 2021 class, linebacker Raesjon Davis is committed to LSU and both cornerback Jaylin Davies and wide receiver Kyron Ware-Hudson are committed to Oregon.

USC’s lone 2022 commitment at this point, Tuihalamaka is an absolute missile as a linebacker. He’s extremely violent and is looking for contact on every play. He can be a tone-setter for an entire defense and would seem to be exactly the kind of player Orlando is looking for in his defense.

The 6-foot-2, 240-pound linebacker is the nation’s No. 70 overall prospect and a top-10 player in the state. He’s a good one and the Trojans need to hold onto him.

He’s also a solid connection for USC at Alemany, which has become a target school for the Trojans. Quarterback Miller Moss was there when he made his commitment to USC, and the Trojans also have a commitment in the 2021 class from offensive tackle Saia Mapakaitolo and defensive back Jaylin Smith.

USC brings in big-time wide receivers like clockwork, and that needs to continue in the 2022 class–especially with five-star Tetairoa McMillan (Anaheim, Calif./Servite) and four-star C.J Williams (Santa Ana, Calif./Mater Dei) standing as the top two receivers in the state and two of the top 10 receivers in the country.

McMillan and Williams are two big-time guys with early USC offers and the Trojans need to grab one or both following what doesn’t look to be a big haul at the position in 2021. Interestingly for USC, in a year where there is plenty of great talent at the position in California, both of the Trojans’ commitments–plus its top remaining target–are from out of state.

This next class has some major talent in Las Vegas, and the Trojans are in early on a lot of it.

Wide receiver Michael Jackson III (Las Vegas/Desert Pines) was a big addition in this 2021 class and USC is hopeful he has some followers making the trip from Las Vegas to Los Angeles in the 2022 class.

While the entire group doesn’t rank as a must-get, USC has to take advantage of its proximity to Las Vegas and early interest its received from some of the area’s standouts.

Branch might be the heaviest USC lean of the group, but all will be recruited hard by more than a few power programs. The Trojans can’t come up empty from that group of elite prospects.

USC signed offensive linemen Courtland Ford and Casey Collier out of Texas in the 2020 class and have gone back into the state for commitments from wide receiver Quay Davis (Dallas/Skyline), running back Brandon Campbell (Katy, Tex./Katy) and tight end Lake McRee (Austin, Tex./Lake Travis).

With so many USC coaches having strong ties to the state–Harrell and Orlando, safeties coach Craig Naivar, running backs coach Mike Jinks and plenty of the support staff–the Trojans are going to continue to push hard in Texas and have to continue coming up with commitments.

Five-star wide receiver Caleb Burton (Del Valle, Tex./Del Valle) would be an absolutely huge statement, but USC has sprayed offers all over the state.

Without any unofficial visits taking place this summer, it’s tough to get a real read on which Texas players are truly interested in making the trip out and could ultimately sign with USC. But the must-get aspect is absolutely there, as USC needs to keep its presence in the state. While signing multiple prospects out of Texas isn’t always necessary, grabbing at least one should be on the to-do list for USC coaches in the 2022 class.

This 2021 class was a year for talent in the state of Washington that doesn’t happen often. The state is home to three of the top eight prospects in the country. USC made an impact by grabbing a commitment from four-star linebacker Julien Simon (Tacoma, Wash./Lincoln), and as the Huskies appear to be dipping just the slightest bit on the recruiting trail, the Trojans are looking to strike.

Three of the top offensive linemen in the 2022 West region reside in Washington, and the Trojans have made inroads with all three.

All three have early offers from the Trojans and all three will be battles to get out of the state and keep away from other programs. Oregon and Washington have offered all three and Alabama has offered both of the tackles.

USC has a little history to fall back on, as the Trojans signed offensive tackle Caadyn Stephen out of Washington in the 2020 class, and former Trojan Zach Banner made the move from Washington to USC as well. At this point, with what looks like could be another typical year for offensive linemen in California, pulling the best big men out of Arizona or Washington is a must if the Trojans are going to get back to building the best offensive lines in the conference.