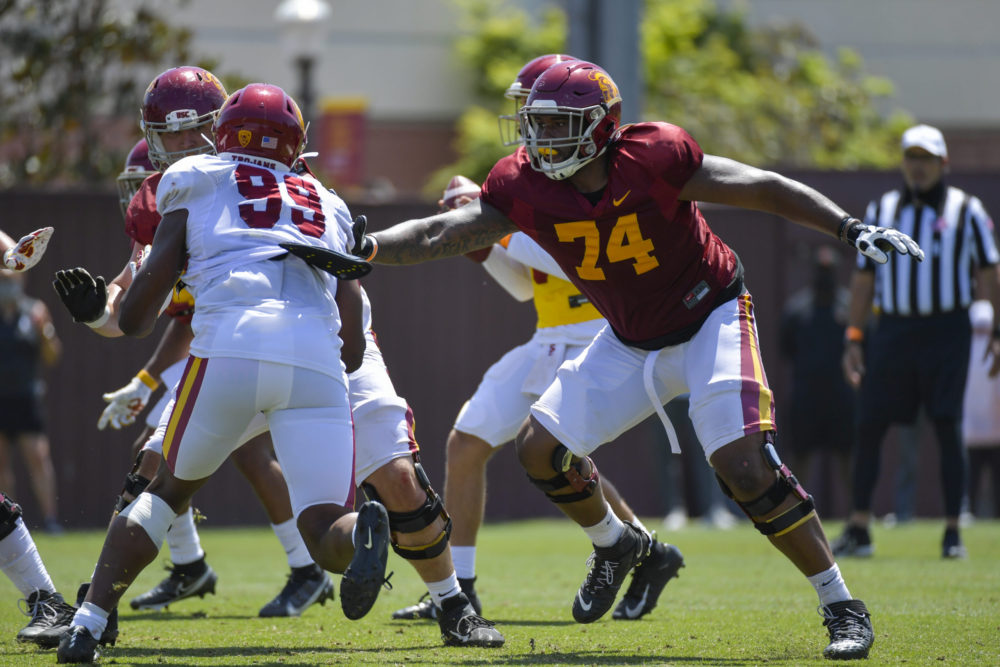 USC had some holes to fill due to NFL departures this offseason. Six Trojans who played significant snaps during the 2020 season are off to begin their professional careers, which opened spots for other players to claim this spring, or at least put themselves in the lead position heading into fall camp.

Early in spring ball, we took a look at how USC was replacing its NFL departures. Here’s we’ll take an updated look, with USC through seven practices and heading towards Saturday’s spring game.

This was the big one this spring. USC needed to find a replacement for Alijah Vera-Tucker and with that, the Trojans likely have the biggest hole to replace from last season along the offensive line in the entire conference. Courtland Ford was the guess as the player who would get the first snaps at the position and that held true. Ford got the first snaps as well as the second, third, fourth and every first-team snap that USC has taken during the practices open to media.

Ford has been good, but anybody is going to be a step backward from Vera-Tucker, who was exceptional at times last season. Certainly there has been nothing from Ford to suggest that he won’t or can’t be the starter there this fall, and seeing Drake Jackson and Hunter Echols day in and day out in practice is going to steepen that learning curve.

Casey Collier has taken every second-team snap at left tackle. The USC coaches have spoken about giving offensive linemen reps at different spots and looking at different formations, but that hasn’t happened yet, save for getting Andrew Milek onto the second team and center and bumping Justin Dedich to left guard.

Changes are likely coming to the offense line and it wouldn’t be surprising to see the shift come after the spring game. Head coach Clay Helton said they will spend the second half of spring ball looking at younger players and potential backups, hoping to raise the level of play across the roster. But at this point, it’s difficult to bet against Ford starting the first game of the 2021 season at left tackle.

USC has to figure out how to replace both Tyler Vaughns and Amon-Ra St. Brown, which means a ton of career production won’t be back for the Trojans. Looking at the roster, USC has a ton of talent available at wide receiver. Looking at the practice field, neither Kyle Ford or Bru McCoy have been cleared for full contact this spring (Ford won’t be, McCoy should be later this week) and USC has been working through scrimmages with just five scholarship receivers.

USC has Drake London working more on the outside, and the ability to play him anywhere on the field should be a boost for the Trojan offense this season. K.D. Nixon and John Jackson III are working as slot receivers and Gary Bryant Jr. is making an impression on the outside. The Trojans need receivers to step up in order to take some of the pressure and focus away from London, and that looks promising so far. Bryant is gaining confidence and made a tremendous grab during Tuesday’s practice.

It’s tough to see how Michael Jackson III doesn’t factor into the offense at least to some degree this season. He’s a true freshman, but isn’t built like one and doesn’t play like one. He’s been as consistent as any offensive player this spring. Expecting a sizable impact probably isn’t realistic with the guys ahead of him, but it would not be surprising to see him chip in a bit and respond positively if called upon.

Looking forward, Bru McCoy can take this position to another level if he hits the field at full go. If his game takes a step forward from last season, pairing him and London on the outside — or him and Bryant with London inside — creates very difficult matchups for opposing defenses.

USC had to play without Jay Tufele last season and they’ll be without Marlon Tuipulotu this year, meaning the middle of the defensive line is wide open for somebody to grab a starting spot. Brandon Pili has played well when he’s been in there, but injuries are again keeping him from been continuously on the field. Jamar Sekona and Jay Toia have taken over that defensive tackle spot and the returns have been positive.

Pili is running with the first team when healthy, but giving time to Sekona and Toia this spring will undoubtedly help USC in the long run. Toia especially looks like a player with massive upside and seeing him in the fall after a summer of this strength and conditioning program is definitely something to look forward to.

Without Olaijah Griffin back, USC needed to find a replacement at the field corner position and it’s been Isaac Taylor-Stuart this spring. He’s the guy that makes the most sense because of his experience and he has played well.

Cornerback might have two of the biggest risers this spring, in Joshua Jackson Jr. and Jayden Williams. Jackson Jr. is playing the boundary corner, behind returning starter Chris Steele, while Williams is backing up Taylor-Stuart at field corner. Williams has played with the ones as well this spring, because the cornerback numbers were so low on with Steele and Dorian Hewett both out and Adonis Otey suffering an injury.

Cornerbacks coach Donte Williams showed last year that he’s just fine going with his starters play after play, so it wouldn’t be surprising to see Steele and Taylor-Stuart for a bulk of the season. But the position also didn’t have much available depth, and now Jackson and Williams are playing like they could be counted on this season. Still, Taylor-Stuart is the likely call here and he’s responded so far with a solid spring.

Losing Talanoa Hufanga was a huge blow to the USC defense, and one where it’s unlikely that one player can replace everything Hufanga brought to the table and all of his production. Chase Williams got the first call to replace him and he’s stuck there throughout the spring. There has been some shuffling at the other two safety positions. USC is now without Greg Johnson for the rest of the spring and Max Williams for the entire 2021 season, so defensive coordinator Todd Orlando and safeties coach Craig Naivar shifted Isaiah Pola-Mao into that nickel safety role and inserted Texas transfer Xavion Alford into the starting lineup. But Williams hasn’t really moved since jumping into that starting spot and it will be very interesting to see what happens with all three current starters when Johnson is able to return to the field. Williams hasn’t had the per-play impact this spring that Hufanga had over his career, but he’s delivered consistent play this spring.

There are early enrollee freshmen behind him, in Xamarion Gordon and Anthony Beavers. The three true freshmen safeties — Calen Bullock as well — have really impressed this spring and it’s very easy to look forward to their continued maturation and what they might bring to those positions down the line.

The bonus spot where USC lost a key contributor is backup quarterback, where the Trojans will no longer be able to rely on Matt Fink to give them an experienced option behind Kedon Slovis.

At this point, the race between Mo Hasan, Jaxson Dart and Miller Moss looks fairly tight, with none of the three really separating. Hasan has played at this level before, which is a clear positive. Helton mentioned last Saturday that Hasan has been a great decision maker this spring, but then threw interceptions in back-to-back practices. Dart and Moss took some time adjusting to the speed of the game, but seem to have settled in recently. Dart was able to showcase some of his athleticism during Tuesday’s practice and that is an element that could elevate him in this race. But all three have made some nice plays this spring and right now it’s tough to establish any as the clear leader for that No. 2 spot.