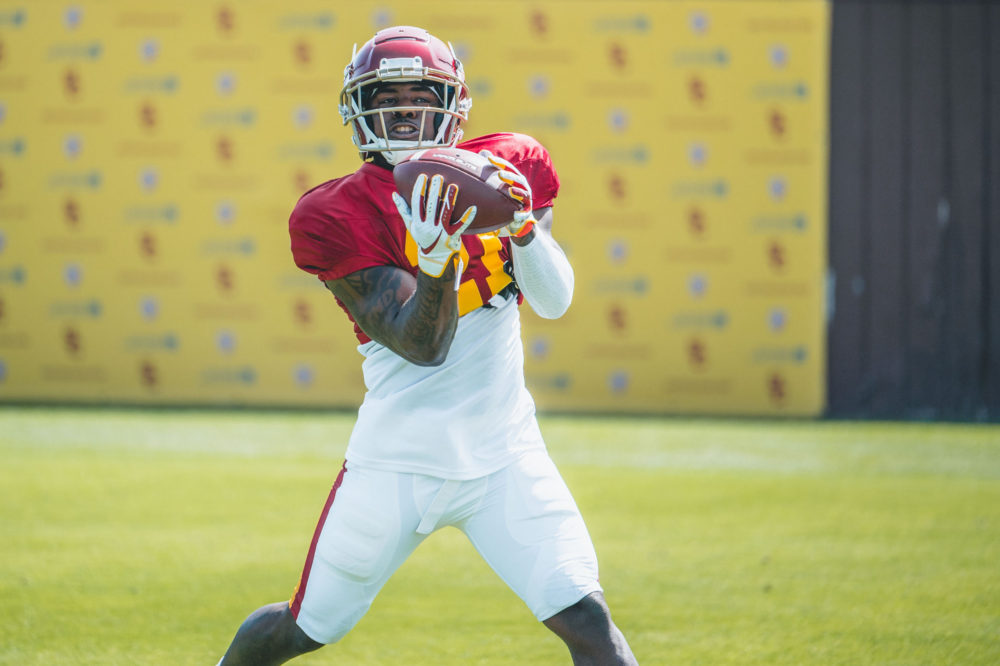 The NCAA rule allowing student-athletes an extra year of eligibility looks as though it will be a major positive for the USC football team this year. Players such as Stephen Carr, Vavae Malepeai, Erik Krommenhoek, Liam Jimmons and others are all back for an extra year and will provide leadership and experience at a number of positions. But USC was also hit by a number of players who decided not to take advantage of the extra season and instead made themselves eligible for the upcoming NFL Draft.

With left tackle Alijah Vera-Tucker, wide receivers Tyler Vaughns and Amon-Ra St. Brown, defensive tackles Marlon Tuipulotu and Jay Tufele, cornerback Olaijah Griffin and safety Talanoa Hufanga off to the NFL, the Trojans have a challenge on their hands in filling all those positions.

Through one week of spring ball and only one practice in full pads, it’s safe to say things are still very unsettled at just about every position, not just those clearly vacated and up for grabs. But for now, we’ll check in on those obviously open spots to see how things are progressing early in spring ball and who has the upper hand.

It’s been Courtland Ford and only Courtland Ford through one week of spring ball. The second-year player was the odds-on favorite to get the first look heading into spring ball and that’s been the case through three practices. During the Tuesday and Saturday practices when media could view, Ford looked to take every first-team rep at left tackle. He’s being backed up by fellow second-year player Casey Collier, who has definitely matured physically over the offseason and looks like he’s on track to contribute at some point during his USC career.

Ford looks that part at left tackle, and there weren’t any alarm bells sounding due to his play through a small handful of practices. It will be interesting to see if he’s out there with the first team again on Tuesday or if the coaches elect to take a look at some different first-team lineups along the offensive line.

It could turn into a difficult balancing act in searching for the best fit here. The coaches have said they want to get a lot of looks at different lineups, but if they become convinced that Ford is the best option, maybe the team is served better by leaving him there and letting him get as many first-team reps as possible.

Colorado transfer K.D. Nixon has come on strong early in camp and he is absolutely going to be a factor in the offense this season. He can play both inside and outside and has shown he can be dangerous at the line of scrimmage or deep down the field.

Gary Bryant Jr. is on track to see his targets increase dramatically this season. His speed has made him something of a security blanket for quarterbacks because he can get upfield quickly and find openings because defensive backs need to respect his speed and quickness to avoid getting beat deep. He’s been open a lot early on, and even though he’s not built like St. Brown, he can work a lot of the same routes underneath.

Michael Jackson III and John Jackson III have been solid this spring, and Michael Jackson has shown some flair for the dramatic, having completed a one-handed touchdown grab, nearly coming down in bounds with another terrific catch and putting together a long catch and run for a score on the first day of practice.

Replacing Tufele is nothing new, as the Trojans had to do it last fall. But he’s gone for good now and Tuipulotu joins him in this draft, opening up a huge hole in the middle of the defense. It looked as though USC could have a ready-made replacement when former Alabama defensive tackle Ishmael Sopsher announced USC as his transfer destination. But Sopsher will miss all or most of spring ball due to injury.

Brandon Pili was the obvious choice as next man up from the roster, but he’s been slowed early on due to injury and hasn’t taken part in a full practice yet.

So the youth movement has been the focus for the Trojans up front, and several have responded, with Jamar Sekona putting together a good couple days in the middle of the line. Kobe Pepe was the second-team tackle, and De’jon Benton has moved outside to defensive end. One of the newcomers to watch is Jay Toia and there is absolutely no doubting his size and power at this point, as he’s absolutely holding his own in the middle of the line as a true freshman early enrollee. None of these guys have been Tuipulotu yet, but the early signs have been good so far.

Cornerback has been a bit odd this spring because USC has been working without returning starter Chris Steele. The numbers are definitely down at the position, as there are just five listed cornerbacks participating right now, and the Trojans have had to roll safeties over to fill in on the third-team defense.

But the performance has been really good so far, as Isaac Taylor-Stuart is off to a solid start this spring, and there has been notable improvement from Jayden Williams. But the surprise of spring to this point has been Joshua Jackson Jr., who converted to cornerback from wide receiver and is playing out of his mind right now. It will be interesting to watch Jackson this week to see if the offense can take advantage of his relative inexperience at the position or if he can stick with everything being thrown at him. If he continues playing at this level for an extended time, it’s hard to see how the USC coaches don’t find at least some time for him this fall — though that’s getting a bit ahead of things right now.

It’s unlikely the Trojans will be able to replace Hufanga with just one player and get the same results that Hufanga delivered last fall. To this point, Chase Williams has gotten the call as the replacement with the first team. It’s clear that Xavion Alford can be an option there as well, though he filled in for Isaiah Pola-Mao with the first team on Saturday, when Pola-Mao was out.

They might not be called upon to play important minutes defensively this season, but it’s been easy to be impressed by the three early enrollee safeties, in Anthony Beavers Jr., Xamarion Gordon and Calen Bullock — especially because none of them played football their senior seasons.