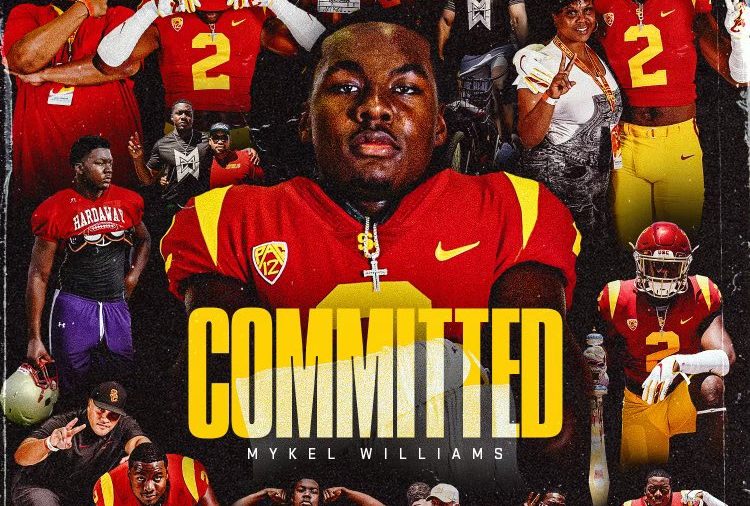 USC defensive line coach Vic So’oto was facing a triple-digit fastball this past weekend and knocked it out of the park. In a weekend that could dictate the future of the USC defensive line over the coming years, So’oto led the charge on official visits for five-star defensive end Mykel Williams (Columbus, Ga./Hardaway) and four-star defensive lineman Christen Miller (Ellenwood, Ga./Cedar Grove), with the help of plenty of other USC coaches and staffers.

Consider it mission accomplished as far as the weekend goes. On Tuesday, Williams announced his commitment to USC. There are still a few months to go until Williams can officially sign, and plenty of schools closer to home will be pushing to flip him, but Williams was fairly emphatic in his commitment.

He’s the brother of USC 2021 signee Michael Trigg, so there was some familiarity there already, and he was a prospect So’oto and the Trojans were in on early and consistently pushed for.

Williams spoke with On3Sports’ Chad Simmons and said the trip to USC and watching how So’oto worked with his defensive linemen helped “seal the deal for USC.”

“Sitting in the film room and watching how coach Vic works with the guys he has there, and showing what he can do with me, that’s what really impressed me a lot,” Williams said. “That’s what got me to do it.”

Williams said he knew at that moment he would commit to USC, and told So’oto the next day at breakfast.

Williams is the nation’s No. 26 overall prospect and No. 6 overall defensive lineman.

The 6-foot-5, 265-pound prospect can play anywhere along the line and his tremendously quick, with long arms and a great motor. He totaled 29 sacks as a sophomore and junior and is the kind of lineman who makes big play after big play.

If USC can hold onto the commitment and sign Williams, he would form a formidable duo with 2021 five-star signee Korey Foreman for at least two years.

In-state defensive linemen have made commitments to Pac-12 programs this spring and summer, shortening the list of uncommitted defensive big men close to home, and making landing out-of-state prospects into more and more of a priority. This is pretty much the absolute best-case scenario as far as USC going across the country to pull in an extremely talented defensive lineman who was coveted by Alabama, Florida, Georgia, Ohio State and virtually any other power program.

This commitment also helps USC tremendously with Miller, as the two are good friends and certainly Williams will be looking to bring the four-star prospect across the country with him. It also helps the Trojans in the state of Georgia, where USC has been extremely busy in this class, as well as past and future classes. Four-star offensive tackle Elijah Pritchett (Columbus, Ga./Carver) took an official visit to USC this past weekend, and the Trojans will host four-star offensive linemen Addison Nichols (Norcross, Ga./Greater Atlanta Christian) and four-star wide receiver Kojo Antwi (Suwanee, Ga./Lambert) in the coming weeks.