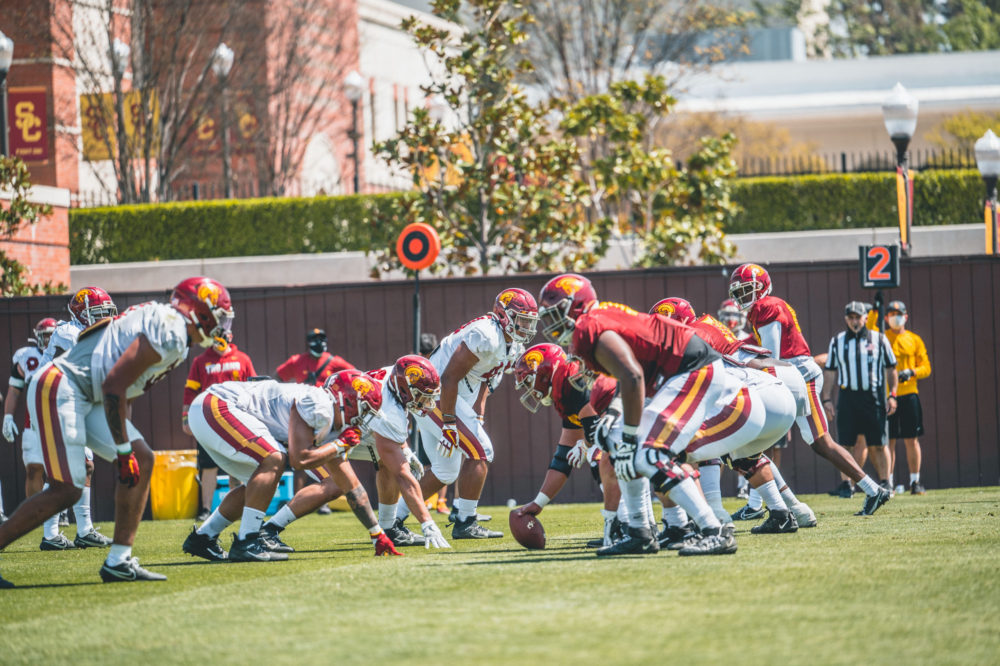 It’s been a while since USC received any good news when it comes to the defensive line. Defensive end Connor Murphy entered the transfer portal just before the calendar flipped to 2021, incoming transfer defensive tackle Ishmael Sopsher missed all of spring ball while recovering from surgery, the Trojans lost veteran defensive tackle Brandon Pili for the season when he was hurt early in spring, backup defensive end Caleb Tremblay entered the transfer portal and headed to Tennessee, and true freshman standout Jay Toia made plenty of noise recently when he elected to transfer to UCLA.

The next few days could start to shift that narrative and serve as the springboard to some positive momentum along the defensive line. But it won’t be easy.

Both have been longtime USC targets, with Vic So’oto making early and consistent contact — enough for both of them to show legitimate interest in USC and make the trip to Los Angeles their first official visit.

Williams is a five-star prospect, the No. 26 recruit in the country and the No. 6 defensive linemen, at 6-foot-5, 265 pounds. Miller is a four-star recruit, the nation’s No. 118 overall prospect and the No. 20 defensive lineman. At 6-foot-4, 285-pounds, Miller is likely more of an inside player than Williams, but both are capable of lining up anywhere along the defensive line, which makes them especially valuable to a USC defense that will change fronts and alignments and ask players to line up in different positions.

Williams has a connection to USC in that his step-brother is Trojans’ 2021 tight end signee Michael Trigg. USC already has a bit of a win in this recruitment. Williams was originally going to commit back in March, but he elected to delay his decision until he could see all of his options up close. The thought at the time was that a commitment then more than likely would have been to Georgia. The Bulldogs are still very much in the mix, and that’s probably the safe bet heading into this visit. But USC has a chance to impress Williams this weekend and do so in a way that has a long, lasting effect on the standout lineman. He’s been on a run of unofficial visit since the start of June, with Florida moving into the picture. He’ll next take official visits to Georgia Tech and Kentucky, and both Alabama and Georgia will continue to push.

Miller has a connection to USC as well. He would like to be an actor and the Trojans’ connection to Los Angeles and Hollywood is a very real selling point for him. He, too, will take visits in the coming weeks — to Ohio State and Louisville — and Georgia will make a push to keep him home as well.

Miller came out to Los Angeles on his own during the dead period, so this will be an opportunity for the coaches to show him the campus and the Trojans’ plan for student-athletes to best leverage their upcoming NIL opportunities — a presentation that has drawn rave reviews from recruits who have heard it.

USC does not have any scholarship players from Georgia on the roster, but the Trojans coaches have hit the state hard in this class and also might be able to lean a bit on Sopsher, who is a Louisiana native and could shed some light on making the transition from the Southeast to Los Angeles for Williams and Miller.

What makes this pair especially important is that So’oto and the Trojans have sunk some significant time into recruiting them. Obviously the coaches are more than capable of recruiting many multiple players at one position, but there are only so many hours in a day. And as visits happen elsewhere, other recruits are beginning to make quicker decisions. In state, USC is chasing four-star defensive tackle Hero Kanu (Rancho Santa Margarita, Calif./Santa Margarita), who has seen his recruitment explode recently and now holds offers from some of the national powers, including Alabama, Clemson, Florida, Georgia, Ohio State, Oklahoma and others. But that next tier of defensive linemen in California is getting swooped up. Four-star defensive end Gracen Halton (San Diego/St. Augustine) committed to Oregon months ago, and three-star defensive linemen with USC offers, Nate Burrell (Bellflower, Calif./St. John Bosco), Damonic Williams (Mission Hills, Calif./Alemany) and Jaxson Moi (San Diego/Cathedral Catholic) have all committed to Cal. That leaves four-star Dejon Roney (Rancho Cucamonga, Calif./Etiwanda), defensive end Rashad McKenzie (Mission Hills, Calif./Alemany) and defensive lineman Zach Rowell (Encinitas, Calif./Torrey Pines) as uncommitted, in-state defensive linemen with offers.

USC will also host four-star edge defender Anto Saka (Towson, Md./Loyola Blakefield) on an official visit this weekend. The Trojans are chasing a couple hybrid defensive end/outside linebackers, and at 6-foot-2, 230 pounds and a terrific athlete who runs track and throws the shot put, Saka fits that role with his versatility on the football field. The Trojans have been able to make a push after offering in April, but Penn State and Michigan visits are coming up and would be options closer to home.

While those three visitors would offer help for the 2022 season and beyond, the biggest immediate help to the line would come in the form of five-star 2021 defensive lineman J.T. Tuimoloau, who has been a little out of sight, out of mind the last couple of months. He’s the lone unsigned five-star prospect from the 2021 class, but that shouldn’t take away from what a huge, huge addition he will be to whatever program signs him. At 6-foot-5, 280 pounds, he can play anywhere on the defensive line (and is probably athletic enough to play tight end if he wanted to). He wanted to wait to sign until he could take his official visits and he’s held true to that plan. The first visit went to Washington and now USC is up on Monday (Ohio State, Oregon and Alabama will follow that).

Tuimoloau has family in Southern California, so it’s not as far away from “home” as it might look with him coming down from Washington. Wide receivers coach Keary Colbert and So’oto have solid relationships with Tuimoloau and his family, giving the Trojans a shot in this race. It’s tough to put USC toward the top of the list for Tuimoloau at this point, and Ohio State continues to sit as the presumed leader, but the Trojans will be all-in on Tuimoloau during his visit. He’s not a replacement for Toia, but he’s similar in stature to Tremblay and would absolutely be in the mix for playing time as a true freshman. He and Korey Foreman coming into the defensive line at the same time would be special. There is definitely some work to do here for USC though.