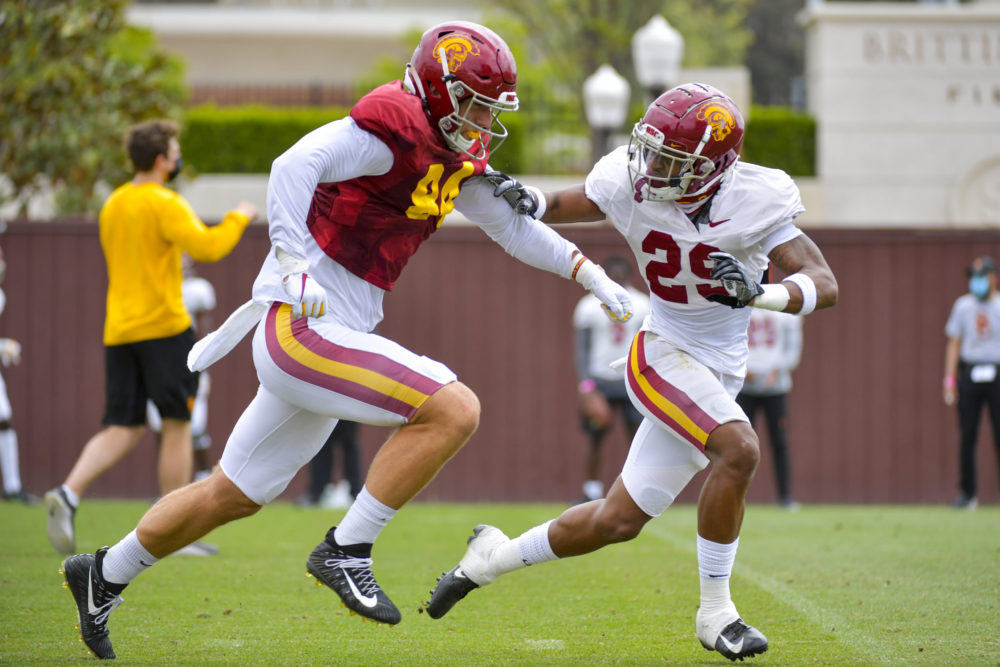 USC’s safety position is faced with a huge hole due to the loss of Talanoa Hufanga and not a lot of experienced depth to help fill it due to not taking a safety in the 2020 recruiting class, and now with just two safeties from the 2018, 2019 and 2020 classes participating in fall camp.

The Trojans signed four safeties in the 2021 class, in Texas transfer Xavion Alford and high school prospects Anthony Beavers, Calen Bullock and Xamarion Gordon. All four are on the field for spring ball and all four are contributing heavily to the first two defensive units.

Safeties coach Craig Naivar praised the group of freshmen, saying they essentially jumped from being juniors in high school to playing FBS football and have embraced everything that comes with that.

“They haven’t shied away from what we’re doing,” Naivar said. “They did a really good job embracing learning the system and doing what we needed to do the eight weeks prior. The weight room stuff we were doing in the offseason really helped their bodies get to where they needed to be to go these 15 practices and be productive.”

Alford is one of the young safeties, but he has an advantage having played at Texas last season and having familiarity with Naivar, who referred to Alford as being instinctive, smart and tough-nosed.

“Recruited him to the university of Texas, from Shadow Creek in Houston, so I had a background on him,” Naviar said. “His advantages going through a full offseason, going through and playing this past season and being a little bit more advanced.”

The addition of Alford and these young safeties have been hugely important to defense and the team. Alford has been taking snaps with the first-team offense since an injury to Max Williams early in the spring forced Isaiah Pola-Mao to the nickel spot. The other three safeties have been fixtures with the second team and have even taken reps at cornerback.

“With signing no one in the 2020 recruiting class, there’s a big gap in there of young men, so that gave us a number to count back in that class to help us, which were, if you saw the spring game, we’re one body away from not having a two-deep, so that helped us immensely in building the depth and going where we need to go to be multiple in what we can do in this package,” Naviar said. “There’s some concepts that we don’t run and won’t run this next year that, we don’t have enough bodies to do it yet, but we’re working toward that direction.”

Naivar has been pleased with where they are at considering the circumstances. However, he knows that spring ball is the time to figure out what the players’ strengths are so they can begin to capitalize on them. As far as what has stood out to Naivar about the young guys, he’s been impressed that they’ve bought his philosophy of “accountability” and “run and hit.”

“I think it’s been the accountability with a lot of young guys out there and new guys, as far as getting our defense lined up and communicating,” Naivar said. “Everything runs through the safety position as far as checks, alignments, blitz checks, multiple things that we have to do pre-snap, and we haven’t watered that down for the young guys, we haven’t watered that down for the news guys.”

Pola-Mao is a returning team captain and will again be one of the leaders this season. He appears excited to be a part of the younger players’ development.

“I’m happy to see that they’re just hungry,” Pola-Mao said of the young group. “Hungry to learn, hungry to get better. You can see it in all of them. They’re all ready to go and ready to learn, not only from coach but from the older guys, too. They’re asking questions about us, what’s going on. To me that just shows how further along they are than when I came in or anybody else. Just their hunger to get better.”

This is only the beginning for these safeties, and Naivar was willing to address all facets of Alford’s performance in last week’s Spring Game, while showing his faith in the process.

All of the freshmen safeties have impressed at various points this spring and Naivar was asked about Gordon specifically.

“He doesn’t shy from contact,” Naivar said. “I love that. I’m really into how is a young man wired as far as football smarts and then are you willing to go throw your body around play after play, and he’s done a really good job of that. If you have to say who picked the system up the fastest of the young guys, it was him. That’s been really impressive.”

Naviar’s enthusiasm always shines through and he certainly couldn’t hide it as he continued talking about the young safeties.

“The aspect, like I said, of not playing a senior year and then jumping into a complex defensive scheme and being able to master and execute it, has been very impressive,” said Naviar. “That’s what’s impressed me the most, is the fact that those guys can come out here and coach Orlando doesn’t have to water his calls down when they’re in there. That’s been very impressive.”

With proper mentorship and a great philosophy this safety group is well on their way to making their name in Trojan history.