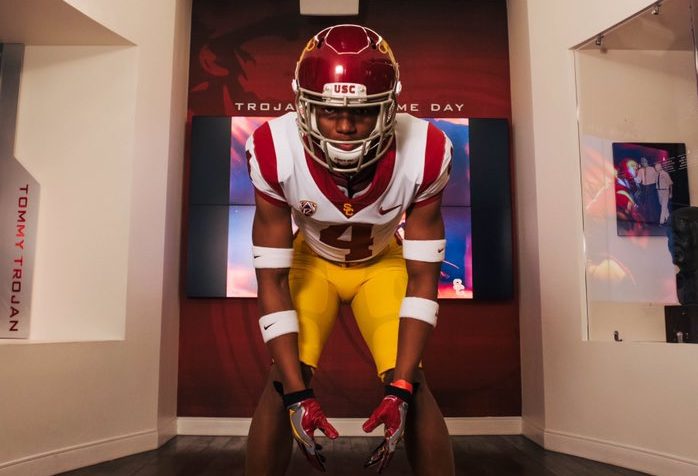 The Trojans continue to stockpile bodies in the defensive secondary this offseason, as USC signed two cornerbacks and three safeties in the early signing period and is now set to add another talented safety to the roster in Texas transfer Xavion Alford.

Alford entered the transfer portal earlier this week and took very little time to announce USC as his transfer destination.

The 6-foot, 190-pound defensive back played in three games for the Longhorns as a true freshman during the 2020 season and will now head to USC to play for position coach Craig Naivar and defensive coordinator Todd Orlando. That duo recruited Alford to Texas but obviously wasn’t able to coach him this past season. The three will be united now at USC.

Alford was the No. 139 overall prospect and No. 8 safety in the 2020 recruiting class, and someone the Trojans recruited. Alford took an unofficial visit to USC during his recruiting process and piled up some major offers, including Alabama, Auburn, Florida, Georgia, LSU, Michigan, Oregon and others.

It’s clear that the USC defensive coaches are looking to infuse some new bodies into the defensive backfield. The Trojans could be looking to fill a major hole back there if standout safety Talanoa Hufanga elects to declare early for the 2021 NFL Draft.

USC did not sign a defensive back in the 2020 class, but got some special teams production out of walk-on graduate transfer Micah Croom this past season. The Trojans signed eight defensive backs in the 2019 class, but two never made it to their first fall camp, and only nickelback Max Williams saw the field consistently on defense this past season.

The Trojans are scheduled to get safety Isaiah Pola-Mao back for next season, along with nickelback Greg Johnson and cornerbacks Olaijah Griffin, Chris Steele and Isaac Taylor-Stuart. But USC rotated very little at the cornerback and safety spots, and it should be interesting to watch how this infusion of new talent shakes up the depth chart behind the starters.

Alford would seemingly have a significant advantage over the high school enrollees, as he has a year of college experience on the field and in the weight room under his belt. He’ll be joined by safeties Anthony Beavers, Calen Bullock and Xamarion Gordon this spring, as early enrollees.