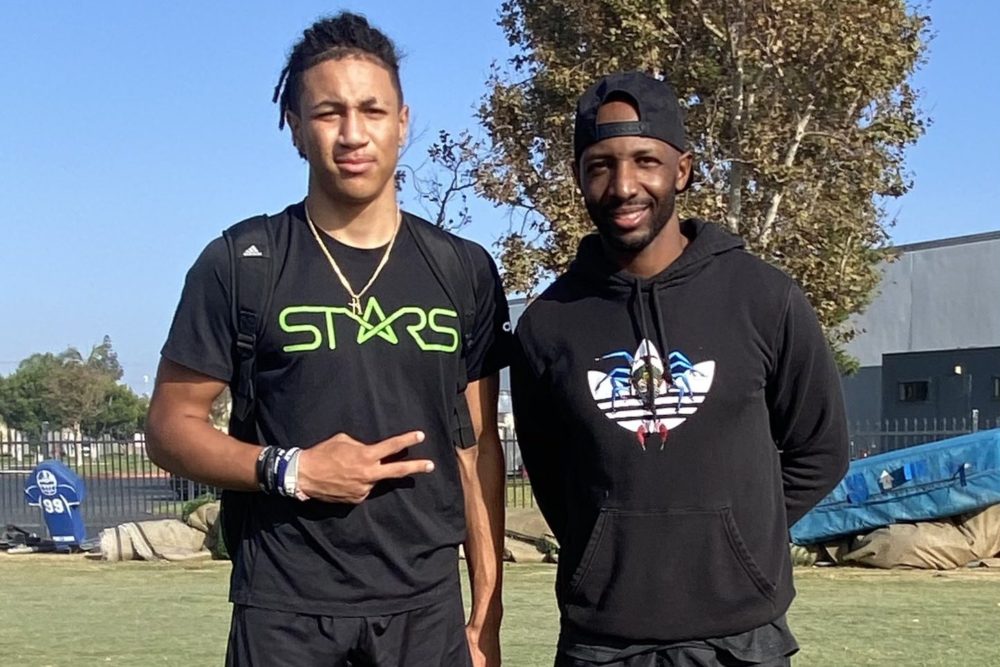 It takes a special kind of athlete to earn an offer from USC before playing a snap of high school football. This week, safety Peyton Woodyard proved he’s exactly that type of athlete.

Without high school football in California this past fall, it was very difficult for even the elite in-state freshmen to make much of a statement in their quests to begin collecting college offers.

Woodyard is already physically impressive, checking in at 6-foot-1 and 175 pounds, and his athleticism is evident from simply watching him move in any drill or after any snap. It’s athleticism that comes from just about everywhere up his family tree.

His father played football at Long Beach State. His mother played softball. His older sister played soccer at Nevada and his older brother plays baseball at Hope International University. Woodyard himself is a two-sport athlete, as he hopes to play baseball as long as possible, in addition to football.

“It was always competitive in our household,” Woodyard said of his family’s athletic success. “My dad would play with us and whoop up on me. It was very competitive.”

He didn’t shy away from competition by heading to Bosco and he’s a standout for one of Premium’s 7-on-7 teams that is young but loaded with talent. His play there clearly caught the eye of USC safeties coach Craig Naivar, who spoke with Woodyard and then his parents earlier this week to extend an offer from the Trojans.

“He said they liked the way I play, my attitude. They liked my size and all that stuff,” Woodyard said, adding that he got a good feel for Naivar in their short conversation. “I like him as a coach. He’s really straightforward. He said he’ll be there for the good times, but he’s also going to tell you when you do things wrong.”

Woodyard said he models his game after Eagles do-it-all defensive back Jalen Mills, who played all over the secondary for LSU and now has 283 tackles and five interceptions in five seasons playing cornerback and safety in Philadelphia.

The offer from USC left a strong impression on Woodyard, as he said he’s grown up in Southern California and been around USC his whole life. But the Trojans will have competition, as Arizona, Arizona State, Florida State, Kansas, Michigan and UNLV have already offered and more will be on the way for a prospect who looks as though he could be one of the nation’s best in the 2024 class.

“I didn’t imagine it like that,” Woodyard said of the early offers rolling in. “But I’ve kind of seen it happening with other kids, so I thought maybe it was only a matter of time. It’s still really early though, so it only proves you have to keep working.”

The offer from the Sun Devils was his first, and two schools that haven’t offered yet — Alabama and Oregon — could eventually factor in.

Woodyard’s father moved to the Sacramento area when he was in third grade, but he is originally from Mobile, Alabama and still has family there. Having been here on the West Coast, Oregon’s success on the field and through recruiting for much of the last decade has left a favorable impression as well.

It’ll be a while before Woodyard ultimately makes a decision on a school, but he doesn’t think he’ll wait all the way until his signing day, and a commitment could come in a couple years, during his junior year.

But USC wasted little time in jumping into the picture to begin building a relationship with Woodyard, and the effort the Trojans are putting in on the recruiting trail — and subsequent recruiting wins — is getting noticed.

“I feel like that’s why USC right now is so big,” Woodyard said. “They brought in those five-star recruits in guys like Domani [Jackson] and Raesjon [Davis]. It seems awesome what they’re building there. Maximus Gibbs (Woodyard’s teammate at Bosco) always talks about it and is always trying to get [2022 four-star offensive lineman] Earnest Greene over there.”

Woodyard said he, Williams and fellow Bosco standout freshman, linebacker Kyngstonn Viliamu-Asa have spoken about potentially playing together at the next level as well.