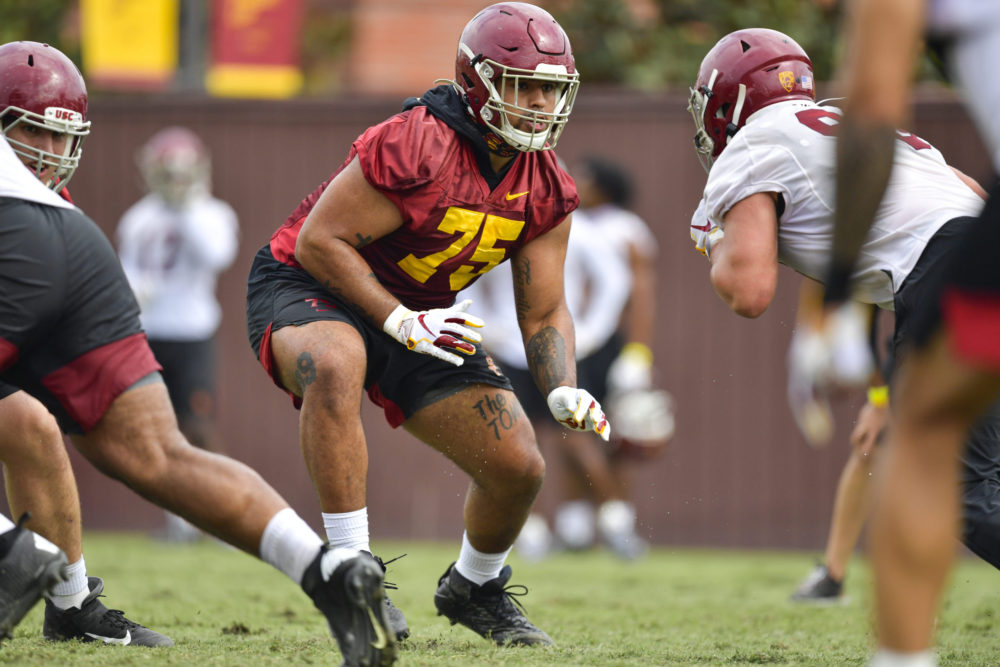 The USC Trojans will be back to a customary number of potential selections in this year’s NFL Draft, after having just two picks last spring. Seven Trojans elected to forgo their final season or seasons of eligibility and make themselves eligible for this draft, and all seven have a chance of hearing their names called at some point during the seven rounds.

If all seven are drafted, it would be the most USC draft picks in one year since 2011, when nine Trojans were taken. If five are selected, which looks like a good bet to be the minimum number at this point, it would be the most since five were taken in 2017, with cornerback Adoree’ Jackson going in the first round and wide receiver Juju Smith-Schuster in the second.

With the day set to begin at 8 am and coverage provided by NFL Network, here are a few things to keep an eye on.

Cornerback Olaijah Griffin was scheduled to work out, but posted to Twitter on Tuesday night that a recent positive Covid test and health regulations surrounding that has made him unable to participate, despite what he said were numerous negative tests. Griffin said he is working with USC to hold his own Pro Day at the school in early April.

USC will also have several players from the 2019 team participating. The most notable name is defensive tackle Jay Tufele, who opted out of the 2020 season as his family was greatly affected by Covid and his sister hospitalized. Also participating will be linebacker John Houston Jr., running back/cornerback Dominic Davis and wide receiver Matthew Hocum.

With all NFL teams in attendance, many eyes will be on Vera-Tucker, who seems a lock to make it back-to-back years that USC will produce a first-round offensive line selection. This past season was a big one for Vera-Tucker, as he had an opportunity to prove that he can play left tackle at a high level. There is no question that Oregon’s Penei Sewell is the top offensive tackle in the draft, but Vera-Tucker could have a say as to who comes off the board behind him. Northwestern’s Rashawn Slater and Virginia Tech’s Christian Darrisaw have consistently been listed ahead of Vera-Tucker in recent lists and mock drafts, but the separation in that group is minimal. A big day from Vera-Tucker could boost him up some boards, especially if teams come away convinced that he can play left tackle. At this point, he’s seen by many as the safest guard pick in the draft, which shouldn’t be taken as a criticism at all.

Amon-Ra St. Brown has been a workout warrior since he was five, when his father, two-time Mr. Universe John Brown, let him start lifting weights with his older brothers.

St. Brown put up some impressive receiving numbers during his three-year USC career, finishing with 178 catches for 2,270 yards and 16 touchdowns. On Wednesday, he’s looking to put up some more impressive numbers.

St. Brown said he’s aiming to run the 40 somewhere in the 4.4 range, jump 38 inches in the vertical and post 25 bench presses of 225 pounds. There wasn’t a single wide receiver who hit all three of those marks at the 2020 NFL Combine.

St. Brown has been shown in mocks as landing anywhere from the second round to the fourth round. His versatility as a wide receiver, able to play both inside and outside, and competitiveness as a football player should help him at the next level, and he’ll show that on Wednesday.

Tufele and Tuipulotu are good friends and getting the chance to go through this workout together will likely be one of the highlights of their path through USC. But it’s going to be fascinating to see how they both perform on Wednesday. Tufele was a little out of sight, out of mind this past fall, as he was able to do some serious training in a professional setting, but didn’t put together any additional game film. Tuipulotu, on the other hand, had a phenomenal start to the season and also impressed during his time down at the Senior Bowl.

Heading into the season, Tufele was seen as a potential late first-round pick. Now boards are all over the place with him. On Monday, it was evident that Tufele is fired up about the opportunity to showcase how hard he’s been working since his decision to opt out of the season. The talent and physical gifts are there, and it would be great to watch both defenders put on a show together. At this point, both look like very safe picks to be drafted, though potentially not until the third or fourth rounds. But impressive numbers and performances could push them up a round or more.

How will Tyler test?

Tyler Vaughns is a very good college receiver and made some big plays during his USC career. On Wednesday, we might get a little better idea as to whether he’s an NFL receiver. Vaughns said he’s looking to run in the 4.4 range and that would be big for him, because he hasn’t had many opportunities at USC to showcase any breakaway speed. His ability to catch the ball on the sideline and use his body there might be unmatched in college football, but his size doesn’t make him a big, possession receiver in the NFL (and even those guys can flat-out fly now).

It’s pretty much a given that he’s going to run very good routes and catch the ball cleanly during the workout, but the times he posts could be significant in his quest to hear his named called at the draft.

Part of the excitement for Wednesday stems from the opportunity to simply watch Talanoa Hufanga run around the field one more time wearing USC gear. The junior safety was an absolute joy to watch play football during his three years with the Trojans.

What will get plenty of attention on Wednesday is Hufanga’s preparation for his pro day. Instead of going to a high tech training facility like virtually every other pro prospect did, Hufanga contacted a guy who resides in both the College and Pro Football Halls of Fame — Troy Polamalu.

Hufanga said he’s lifted very few weights during this process, instead concentrating on plyometrics and flexibility, as well as reading books and preparing mentally.

Hufanga will have to answer health questions for NFL teams, as he’s had shoulder injuries at USC. But he did just get through the 2020 season healthy, and playing at an All-American level. Mocks have been tougher on him that probably USC fans would imagine, as he seems like a sure-thing star based on his football ability. Running and testing well on Wednesday would help in a big way. But regardless, it’s really difficult to bet against Hufanga getting drafted, winding up on a roster and sticking in the NFL for a while.