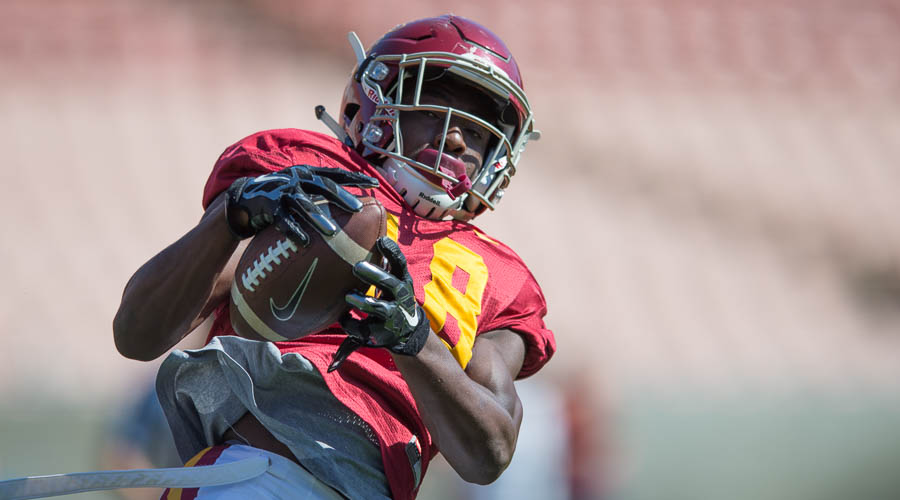 * Ajene working at corner: With depth issues at corner right now (Adoree’ sitting out spring for track, Lockett out with concussion issues), Clay Helton said he took a look on the offensive side of the ball to see who could pitch in at corner if needed. The answer he came up with, at least for today, was Ajene Harris, who played QB, WR, CB and safety in high school. Ajene said he is happy to do whatever he can to help the team and get on the field, something he really wants to do after being so limited the past two years due to injuries. Not surprisingly, Ajene held his own today in coverage (he’s just a natural on the football field) but it remains to be seen how long he might stay there or when he would return to offense.

* Simmons at RT: Speaking of position movement due to injuries, both Chad Wheeler and Chuma Edoga were missing for part of practice so Jordan Simmons moved from RG to RT, something he also did on Saturday. Simmons played tackle in high school so it’s not a new position for him, and it’s another chance for Jordan to continue making a case for playing time in his senior year. At one point late in the day the o-line was Banner, Brown, Falah, Viane, Simmons.

* Pressure situations: The big drill of the day at the end featured 20 plays of pressure situations where the defense was dialing up various pressures that had been installed from Clancy Pendergast. Even Helton said he didn’t know which was the pressure was coming from, and he added that it was exactly what he remembered seeing from Clancy in 2013. Porter Gustin, Marvell Tell, Michael Hutchings were credited with sacks at different points, while Jabari Ruffin, Christian Rector and Kevin Scott helped combine for sacks. Uchenna Nwosu had a tipped pass at the line, and a sack in the final team period. “Clancy was ultra-aggressive, it was a hard day for the quarterbacks,” said Helton.

* Coaching concern: Not that it will come as a surprise to any Trojan but Clay Helton said his primary concern at this point is depth and youth on the defensive line. “It’s like when Damien, Viane and Toa were freshmen on the o-line, we needed them to play and they were young,” Helton said.

* Soma working LB drills: Soma Vainuku worked out during some early practice drills with the linebackers as he continues to try and show his versatility for the next level. Not only was Soma underutilized on offense at USC but if they weren’t going to use him as a runner or blocker I always thought a switch to linebacker would have made sense for the cousin of Rey Maualuga, and it looks like he’s not ruling that out for the future.