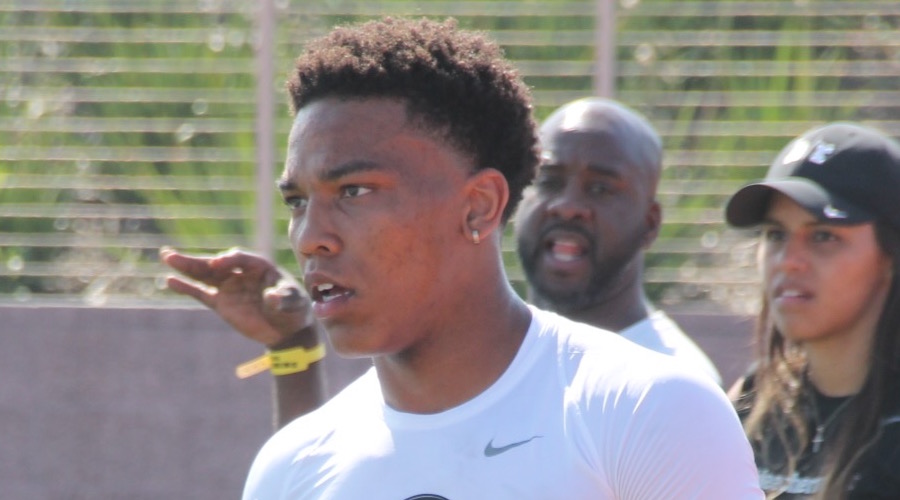 The linebacker group was as advertised as the top line guys impressed as expected, and a couple other names were deserving of mention as well. I went into the camp with a general “top 5” at the linebacker spot of Palaie Gaoteote, Solomon Tuilaupupu, Raymond Scott, Bo Calvert and Merlin Robertson. Of those 5, only Calvert wasn’t invited to The Opening finals, and I thought Bo looked pretty filled out from the last time I saw him and he was fairly physical. Jack Lamb also made it to the Finals from the linebacker group and he’s a guy whose stock has really risen this spring. But the highlight for me was seeing guys like Palaie, Solomon and Scott on the field at the same time going back-to-back in many of the drills. Palaie is just so quick, so attacking to the ball, there were a lot of expectations of him coming into the camp and he didn’t disappoint. Solomon is right there too, an impressively-built player who just gets after it. He’s a little taller than Palaie, and one former coach I spoke with at the event says he thinks Solomon ends up as an edge OLB, similar to the role Uchenna Nwosu and Porter Gustin play now. Scott, on the other hand, is an inside backer, no doubt about it. And I think it was one of the best examples I’ve seen from Robertson of putting himself into that upper group of backers this year, he held his own all day. I also liked Eli’jah Winston from Oregon, good size. Two 2020 prospects I would want to mention are Noah Sewell (the brother of Penei Sewell) and Justin Houston (brother of John).

To nobody’s surprise, this was also a very good group of receivers. I thought Amon-Ra St. Brown (photo above) might have been the best player on the field today, certainly the best non-linebacker. He had a couple impressive catches against Isaac Taylor-Stuart that really made a statement, but he was equal opportunity today in terms of beating defensive backs as he beat a lot of them. He’s got a nice combination of strength to battle the DB’s and speed to get past them. After that you had Chase Cota (who tested well and also came away with a bloodied nose and lip after some aggressive coverage from Robertson), Devon Williams (fluid and good body control for someone with his size), and Jalen Hall. Others of note that included Michael Ezeike (he is all of 6-5 if not a little more) and Marquis Spiker (good all around player), and we look forward to seeing more from John Jackson as the spring continues, he had one nice touchdown on a post route.

I thought Taylor-Stuart had a respectable day (nothing wrong with a 4.43 40) but he was disappointed in his overall results, and it was certainly a surprise that he didn’t earn an invitation to The Opening finals. Two defensive backs who did earn invites were Olaijah Griffin and Bryan Addison. Griffin was terrific in his coverage, a speedy athlete who also has decent height. Speaking of height, Addison is tall (6-4) and lean, and I thought he made a lot of plays today. Marcus Johnson (USC commit) and Max Williams were also out there.

Interesting that there was only one lineman who received an invite to The Opening finals, and that was center Justin Dedich, who has been consistently one of the top line performers this spring. I did like Penei Sewell, he’s a load of a man on the o-line, and a few underclassmen that I liked included Jonah Tauanu’u (2019 OL), Faatui Tuitele (2019 DL, who had a large family contingent there with Tuitele jerseys) and Matthew Pola-Mao (2019 DL, brother of Isaiah)

There were two invites for the Elite 11 finals, and Matt Corral wasn’t one of them. It’s possible he could earn an invite by attending another qualifying session, or he could follow the route of Matt Fink and Jack Sears by not going to the event and simply focusing on getting ready to be an early enrollee at USC. I thought he threw the ball fine, and he also gave a good video interview talking about the connection he feels with the Trojans right now, Johnny will be posting that video later.