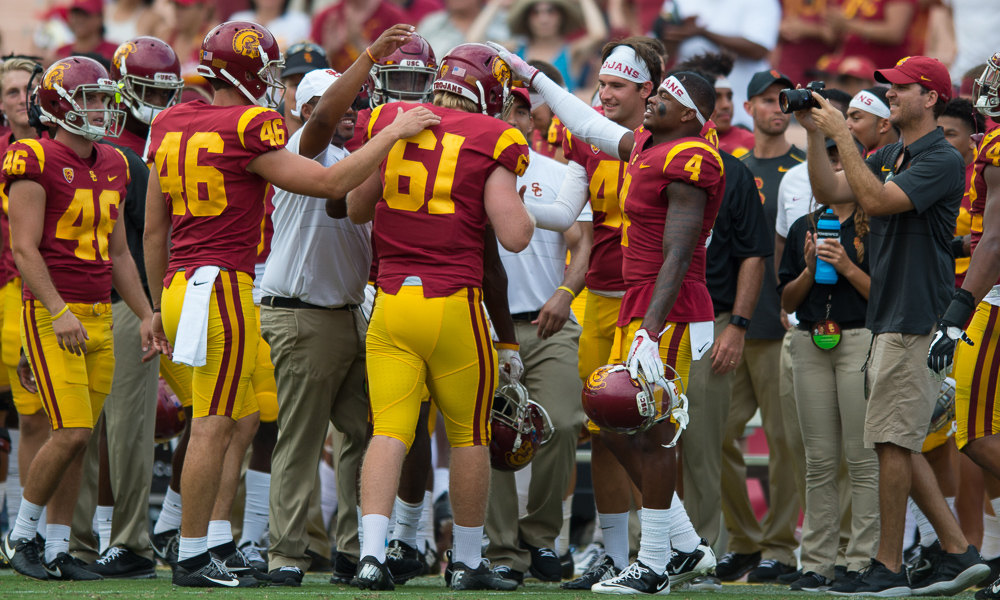 WeAreSC takes a cardinal and gold look at the news and notes of the past week affecting USC football and USC athletics.

USC long snapper Jake Olson signed with United Talent Agency last week, as he will continue his career as an author and motivational speaker. But that wasn’t the only news he made. Olson, who lost his sight at 12 years old due to retinoblastoma, announced that he will use USC’s pro day to raise money for retinoblastoma research. Olson plans to participate in the bench press and donors are able to contribute a dollar amount for every rep he completes. A one-time flat donation option is also available. Those wishing to participate or read more about Olson’s story and goal can visit his site.

USC staffers and the video department have published a few videos this winter, giving fans a glimpse of the work the team is putting in on the field and in the gym. One video featuring wide receivers Tyler Vaughns and Michael Pittman, as well as running back Stephen Carr and defensive end Christian Rector came from the USC Football page and showed a bit of the early morning field work.

Another video, from Assistant Director of Player Personnel Trey Johnson, featured a bit of what goes on in the weight room.

USC needs to find a way to build some momentum in the 2020 recruiting class. This week, the Trojans looked outside the state, as four-star safety Chris Thompson Jr. tweeted that he received an offer from USC after a conversation with new Trojans running backs coach Mike Jinks. While pulling Thompson out of Texas is likely a longshot, it shows that USC is going to use Jinks to go after elite prospects in that state, and also that the Trojans, fresh off signing a crowded 2019 class of defensive backs, are still looking for talent in the secondary in 2020.

After missing out on a few top groups of elite 2020 prospects, the Trojans landed in the top ten for four-star and top-100 prospect Jalen McMillan (Fresno, Calif./San Joaquin Memorial). The 6-foot-2, 199-pound wide receiver has a group of college football elite making up his top ten, as USC is joined by Alabama, Florida, Georgia, LSU, Notre Dame, Ohio State, Oklahoma, Oregon, and Washington.

It’s tough for USC to go into the Southeast to sign 6-foot-2, 323-pound talented defensive tackles. Watching one from Narbonne commit to a school in the Southeast is a substantial blow. Defensive tackle Jordan Berry, two weeks after receiving an offer from USC, visited LSU for a junior day over the weekend and made the decision to verbally commit to the Tigers. Berry joins talented cornerback Elias Ricks (Santa Ana, Calif./Mater Dei) as local and priority USC targets who have already committed to LSU. There is still time before December’s early signing period for the Trojans to make a recruiting run, but right now the momentum in the region is clearly pushing prospects to look outside the area.