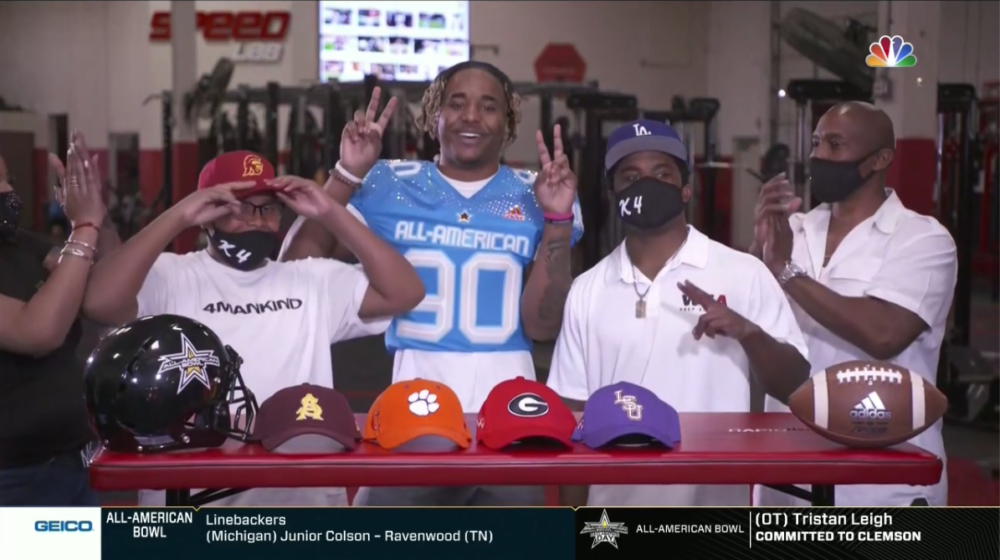 Tomorrow marks the beginning of the late signing period, and while the first Wednesday in February is no longer the real Christmas morning for recruitniks, there are still some notable announcements happening on this traditional signing day.

A huge majority of the 2021 recruiting class signed this past December, and USC announced 20 new additions on the first day of the early signing period. Here, we provide a rundown of the news and notes you need to know heading into Wednesday.

USC will enter signing day with the No. 8 recruiting class in the country and No. 2 in the Pac-12 (behind Oregon, which sits at No. 6 overall). It’s unlikely the Trojans will be able to catch the Ducks in the team rankings, but finishing comfortably inside the top 10 is a far cry from where USC sat at this time last year, as the Trojans finished with the No. 64 overall class in 2020.

USC announced 19 high school players and one transfer on the first day of the early signing period. The list of signees already announced includes:

The notable player missing from that group is No. 1 overall prospect Korey Foreman (Corona, Calif./Centennial), who signed with the Trojans on early signing day, but held off announcing until he could do a televised declaration on Jan. 2. USC made a big deal of his commitment when he went public with it, but there’s a chance it’ll be celebrated again on Wednesday. Often, signing day can turn into a discussion of who won on that specific day — programs that added the most players or made the most noise on signing day — but it shouldn’t be forgotten that USC is already holding a signature from the No. 1 overall prospect in the country and a very impressive overall class.

Foreman’s commitment was massive, and if USC is going to climb back to the top of the Pac-12 and into the national discussion in the near future, it’ll likely serve as one of the bullet points as to why.

Four-star cornerback Ceyair Wright (Los Angeles/Loyola) was overshadowed when he announced his commitment to USC on the same show as Foreman. Since Foreman had already signed, USC could publicly comment on him, while Wright hadn’t signed yet, so USC wasn’t able to announce him. That will change Wednesday, when Wright is scheduled to become an official member of this recruiting class.

That’s another really big addition for the Trojans, and shouldn’t be overlooked simply because he’s been committed for a month. Wright is a top-10 California prospect and the top defensive back in the state. He brings speed and coverage ability to the cornerback position and he completes a three-cornerback, three-safety haul in this class of six California high school defensive backs that will add a ton of talent to the defensive backfield.

Wright is an actor who has a part as LeBron James’ son in the upcoming film Space Jam: A New Legacy, so there might not be an incoming player more able to take advantage of USC’s connection to Hollywood and the new push for Name, Image, Likeness than Wright.

The Trojans could also use Wednesday to shine some more light on the three other incoming transfers, as USC has used the transfer portal well over the past few weeks and landed former Colorado wide receiver K.D. Nixon, as well as defensive back Xavion Alford and running back Keaontay Ingram, both from Texas.

All four transfers (these three plus Sopsher) could be potential starters, or at least heavy contributors for USC. The transfer portal has become must-stop shopping for all programs and USC has used it wisely this offseason in an attempt to plug a big hole at defensive tackle and get some playmaking ability at several skill positions.

Priority one is Raesjon Davis.

The four-star linebacker from Mater Dei is the top uncommitted target for the Trojans who will announce on Wednesday. Davis is scheduled to go around 8:30 am, so USC fans won’t need to wait long to hear his decision.

USC pursued Davis throughout and is now in a battle with Ohio State for a signing day commitment. At this point, things look good for the Trojans to add an incredibly versatile linebacker and someone who could play a couple different positions with his ability to drop in coverage, rush the passer and chase sideline to sideline. Davis might not have ideal measurables for an inside linebacker at 6-foot-1, but it’s easy to forget about that when you watch him play because he brings everything to the table.

USC is also in the mix for three-star offensive tackle Austin Uke (Dallas/Parish Episcopal). The talented tackle had a huge recruiting rise throughout his senior season, as he went from a virtual unknown to holding a final five of Northwestern, Penn State, Stanford, Texas and USC heading into signing day.

The Trojans have been recruiting Uke hard and would like to add a fourth high school offensive lineman to this class, but it’ll be interesting to see how Texas closes on in-state prospects with Steve Sarkisian as the new head coach for the Longhorns.

One of the biggest names in the 2021 recruiting class will likely be talked about on Wednesday, but not in terms of making a commitment or signing. No. 3 overall prospect J.T. Tuimoloau (Sammamish, Wash./Eastside Catholic) won’t sign on Wednesday, and will likely wait until late April in order to take recruiting visits before deciding.

USC continues to stay involved, along with Alabama, Ohio State, Oregon and Washington, which make up his top five schools. He should probably be considered a longshot for the Trojans at this point, but USC is staying in the game and that’s a big part of it when it comes to elite recruits.