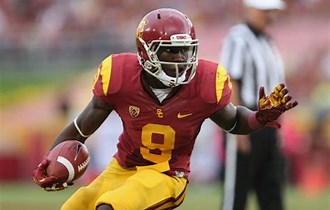 USC has been playing football for a long time and Trojans are responsible for some of the most impressive numbers in college football. This week, the WeAreSC staff answers the question: What are some of your favorite USC football statistics?

There really are too many to list here, so the following are just a few of my favorites.

USC has produced 512 NFL draft picks in its history, the most all time. But Notre Dame is just one behind, at 511, so I don’t know how much longer the Trojans will hold onto the overall lead. It’s an impressive number, and something USC definitely uses in recruiting, so watching that lead shrink seemingly year after year over the past handful of drafts has been disappointing.

It ultimately came in a loss, but 345 receiving yards posted by Marqise Lee against Arizona is still one of the most impressive statistical performances I’ve ever seen. And in USC’s long history, this is a number that dominates its competition. On the single-game receiving yards list, Nos. 2-10 are separated by just 38 yards. Lee is 85 yards clear of the second-place entry (R.J. Soward’s 260 yards against UCLA in 1996).

LenDale White never gets enough credit for what he did during his USC career. It’s tough to always mention every Trojan running back in the discussion of USC greats, but White gets left out a lot, likely due to the lack of a Heisman Trophy. He has something, however, that no other USC running back has–the career rushing touchdown record. His 52 touchdowns on the ground are three more than Charles White’s 49, and who knows how many more White would have scored if he wasn’t splitting time with Reggie Bush, who is tied for eighth all-time at USC with 25 rushing scores of his own.

The number of passes it took for Matt Leinart to throw his first touchdown. I don’t remember exactly what I though the trajectory of Leinart’s career would be when he threw that five-yard touchdown to Mike Williams against Auburn in 2003, but I knew it was a great way to officially kick off his college football career. Leinart wound up setting a bunch of records and is regarded as one of the greatest college football quarterbacks of all time, but this stat is one I’ve always enjoyed.

Cal’s football team in 2013 was absolute garbage. But that doesn’t matter when it comes to USC tying a college football record with three punt return touchdowns in a game (the Trojans actually did it in just the first half against the Golden Bears). Nelson Agholor struck from 75 and 93 yards, and Josh Shaw scooped up a blocked punt by Soma Vainuku for a short touchdown return.

It’s also the number of touchdowns Adoree’ Jackson scored against Notre Dame in 2016–when he took one in on a punt return, kick return and as a receiver. USC players have put up some all-time performances against Notre Dame–and many have done so against much better Notre Dame teams–but the uniqueness of this one makes it fun.

The greatest of all USC’s traditional jersey numbers.  Thanks to the great Junior Seau for starting this tradition.

Also the number of points scored by the good guys in the 1974 Comeback Game and the 2005 Orange Bowl.

Also the number of times in the average week that Bob Stoops wakes up sweating and screaming because of nightmares over the 2005 Orange Bowl.

The number 55 has been very good to us over the years.

The number of USC Heisman winners.

That’s right, everybody, seven.  SEV-EN!  Reggie won that thing.  I saw it.  I saw the games.  I saw the speech.  I saw him holding that trophy.  I saw the trophy in Heritage Hall.  Don’t tell me it didn’t happen.  What is this, Stalin’s USSR?  Do we just erase history now and require everybody to pretend it didn’t happen?  And let’s face it, if the Heisman was somehow not awarded to any winner who received anything in college that violated NCAA rules, the Heisman probably hasn’t been awarded more than twice since 1947.

The number of times a 9-1 team has given up 66 points in the crosstown rivalry game. Why is that a favorite stat?  Because it’s funny.

I do believe this is also the number of times that a team has lost 50-0 in the crosstown rivalry game. Also funny.

The number of legitimate excuses why USC has allowed Oregon to build one of the best offensive lines in the country by consistently landing O line recruits that USC wanted.  Does this qualify as a favorite stat when I hate it so much?  I don’t know.  But it’s a critical stat.  Carthago delenda est.

I try to keep statistics to a basic level and not get too caught up swimming in a numbers game within a game. However, given the recent philosophy of the Trojans offense and the long history of the Trojans offense, the one category and the statistics that are within that category is rushing the football. I want to see how many rushing attempts, and I want to know just how many net yards the ground game has accumulated. Within those two rushing stats, I want to know what is the average yards per carry. This is the evidence that tells me what the USC offensive philosophy is although I realize that defenses can have a say in how those stats can sometimes be misleading.

When we hear about a balanced USC offense, which the current offense isn’t, my long history with the program is that without a successful physical ground and pound running attack working in concert with an effective passing game, any lofty goals of winning Pac-12 titles and national championships isn’t likely to happen. Without an effective running game with rushing statistics providing the evidence, a coach can talk all he wants about being balanced and running the ball physically to control the line of scrimmage, but single game and seasonal rushing stats to me speak louder than words.