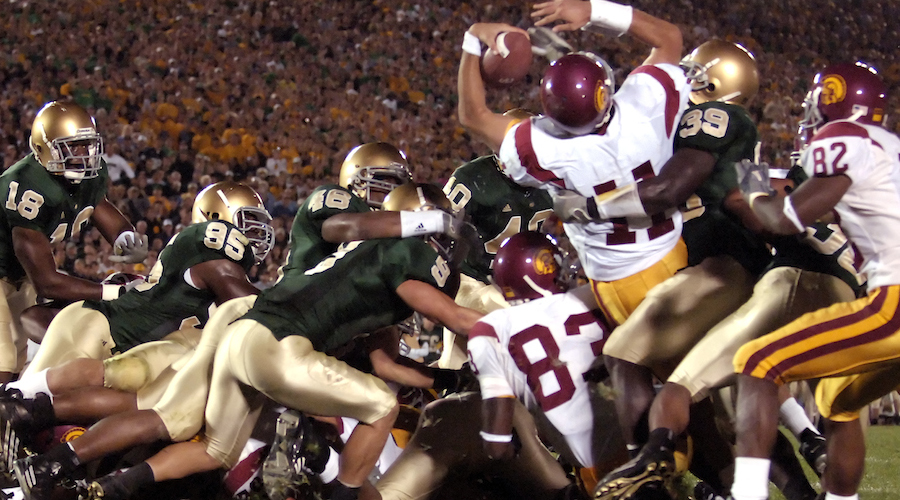 Observing USC’s week off from practice and in honor of spring break, the WeAreSC staff was asked to choose the best USC Trojans road trip or away game they’ve experienced.

Look, the correct answer was submitted by Chris Arledge, but since he got his in before mine, I’m going with a close second for me. January 2003 was the middle of my sophomore year at USC and my friend and I went from discussing the possibility of going to the Orange Bowl, to having everything booked, in about two hours. Iowa fans don’t get as much credit as they deserve nationally for the way they tailgate, and walking through that parking lot felt like we’d accidentally parked in Iowa City. Then the opening kickoff happened, and to that point, it was the loudest I’d ever heard a stadium get. But we all know how things played out, from Carson Palmer taking home MVP, to true freshman Mike Williams and running back Justin Fargas having big games. Pete Carroll’s run started before that Orange Bowl, but I remember every minute of that game and the feeling that USC’s trajectory was simply unstoppable.

Without question, the best road this season and almost every other season is the Notre Dame Weekender. Flying into Chicago and spending either all or part of the festivities from Thursday to Sunday is the best of the best. Chicago is a tremendously fun city from music to food to entertainment, and the Trojan fans come in mass, highlighted in the Windy City with the Friday at noon pep rally at The Navy Pier, which includes the Trojans Marching Band and USC Song Girls. The drive or train to South Bend is very pretty with the turning shades of leaves, and Notre Dame is almost mythical in its beauty and traditions on game day. Of note, the game usually is played in the third week in October, but this 2019 season the game will be in the second week of October (10/12) due to ACC scheduling commitments. If anything, it probably means warmer Midwest weather although that too can be unpredictable.

This is easy.  It’s too obvious, but it’s also the only answer I can give: the Bush Push game.  That was the best pre-game atmosphere I’ve ever been around, just an amazing build up.  They thought they had us, and Notre Dame Stadium was going crazy on 3rd and 19, and on 4th and 9, and again after Matt L fumbled out of bounds and the crowd poured onto the field.  I’ll never forget it.  The greatest live event I’ve ever attended.

For me it is the January 1975 Rose Bowl. It was the largest crowd in Rose Bowl history with over 106,000 fans crowded into the classic venue to watch the 3rd USC vs. tOSU Buckeyes. History was made again with a one point hard fought, physically pounding win and another National Championship in three years. I was totally spent after the game with cuts over both eyes but full of satisfaction. We did it and in style too out toughing another Woody Hayes Buckeye team. It still is a Rose Bowl classic game now overshadowed by the exciting USC vs. Penn State 2016 game.

Aside from the Obvious ND experience, 2016 trip to Husky Stadium in Seattle Washington. The tailgating on a yacht, the logistics of the stadium. The night life. It was an incredible experience being that USC pulled off an incredible Victory against a top ranked Husky opponent.
If you have not made the trip, I would recommend it, Seattle is a fantastic city to visit.