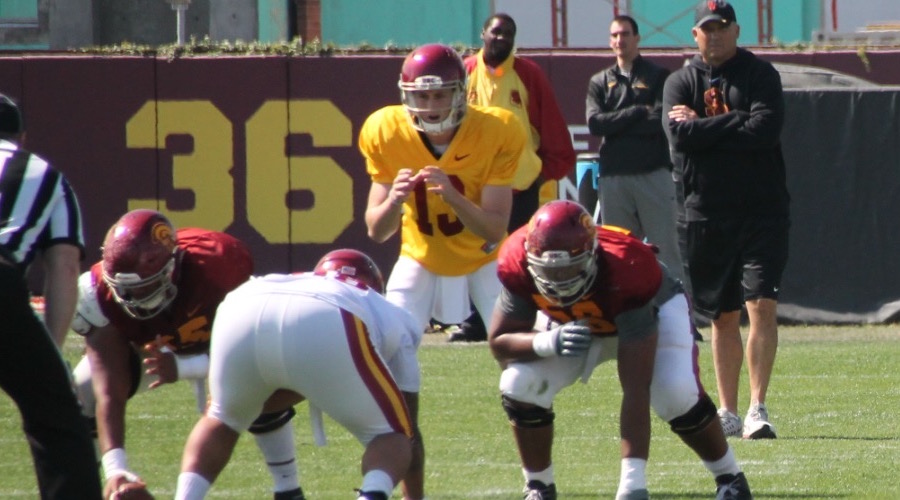 Right now it appears as if Jack Sears could get the start at quarterback on Saturday. If that happens, do you see any changes in the offense based on Sears being in the game?

First of all I want to be clear that I wish J.T. Daniels a quick recovery and no ill effects from his concussion, but I have to admit I’m looking forward to the possibility of getting to see Jack Sears in action this weekend. My memories of Jack in high school are primarily of his magical run in the playoffs of his senior year of high school when he led San Clemente to a CIF-SS and State title with an impressive combination of running and passing. We had already seen Sam Darnold the year before at the school and Jack was accomplishing things that even Sam hadn’t accomplished and it really was impressive. When it came time for the quarterback competition this past off-season I thought Jack would have had his best shot the longer the competition went but if anything the scrimmages were short and he didn’t get enough time, because I think Jack is one of those “gamer” guys who performs better when the lights come on. If he does get his shot, don’t be surprised if he makes a couple plays that make you say “wow, I didn’t expect that”.

When Matt Fink went in the game for JT Daniels against Utah, you saw a more run-pass quarterback that yielded some limited positive results. It stands to reason that with Jack Sears, who has the ability to be a dual-threat quarterback threat, the Trojans’ offense will probably look a bit like the Sam Darnold style of offense. Sears can pass and he can run, and it won’t be shocking to see Jack roll out a ton with play-action and become the focal point of the offense. Obviously, ASU will try and limit Sears to the pocket and apply plenty of pressure, but Jack is talented enough to sidestep rushes and try and make something happen ala Darnold. Sears isn’t Darnold, but if Sears does play, it certainly makes for fascinating possibilities and at this point, why not give Sears a shot even if it wasn’t planned or intended at this point of the season. Perhaps the former San Clemente star will be John Fox 2.0.

If Jack Sears is slated to play this Saturday against ASU, I would hope that the offense would feature more of the run game on first and second down. From my point of view, the idea for an offense is to consistently get to third down and short situations. That would be ideal for an inexperienced quarterback like Sears if he has to play. Coincidentally, I believe that would be beneficial for J.T. Daniels as well. Obviously, the offensive line has not been consistent in run blocking. But they can’t get incrementally better during a game if the attempts are sporadic. Even with limited success early in a series and game, the running attempts will set up “play action” opportunities that freeze defenders whose first responsibility is the run.