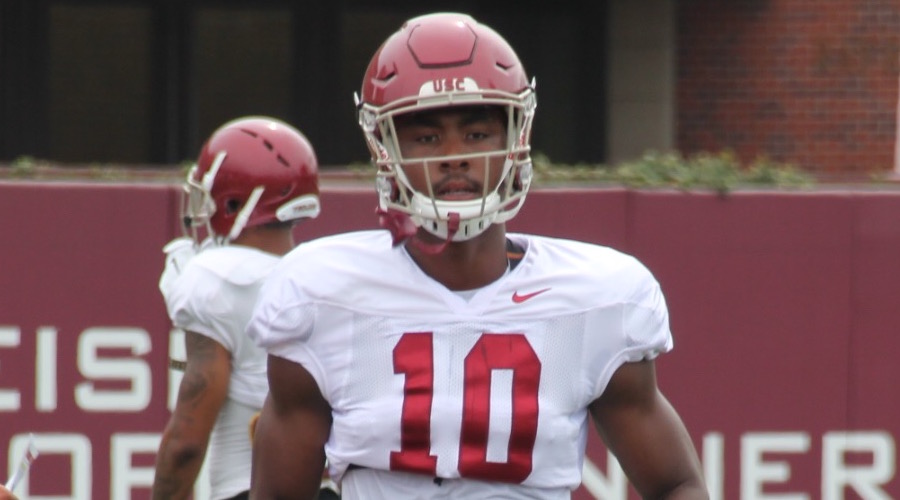 Garry Paskwietz, Johnny Curren and Greg Katz talk about what stands out from the first week of fall camp, including an impressive performance by true freshman Stephen Carr, the second year of the defense under Clancy Pendergast, and the tight end spot.

Here’s a transcript of the podcast

Garry Paskwietz “I’m going to get us started talking about the tailback position. We knew it was going to be a good group, a deep group, and we’re seeing that proven out through the first week. I’m really impressed by what we’ve seen from Ronald Jones, where he’s at as a player and a leader, he’s more vocal, comfortable in his own skin. But the guy I want to talk about is Stephen Carr. I don’t think we know yet where he’s going to fit in the pecking order of backs but what he showed on Saturday with three touchdown runs showed every bit of the vision and cutback running style that we know he has. It reminded me of the first day in pads for Reggie Bush so many years ago, and he runs with toughness. Johnny, just a very impressive start for Mr. Carr”

Johnny Curren “One of the things I think has translated well has been his pass catching ability. He was a real star on the 7-on-7 circuit, and he has also shown pass blocking ability to put his nose in there. A lot of running backs it takes a few years to develop that. He seems like a guy who has come in kind of tailor-made to do a little bit of everything.”

Greg Katz “I remember when Charles White came in, and when I look at Stephen they look the same. There’s that sneer, that thick neck, that attitude of “you ain’t stopping me”. He’s so far beyond what we’ve seen from a lot of running backs that come in here, and a lot of them were good, but this guy is ready to go. I don’t know who is going to sit in that TB rotation, I just know he’s not going to be one of them. If he continues to do what he did on Saturday he’s going to play and the people in the Coliseum are going to be on their feet.”

GP “Johnny, let’s move to the next topic, what’s standing out to you?”

JC “I’m going to say the defense, just the speed that they are flying around to the ball, but also the crispness and the comfort level for all the players. It’s that 2nd year in Clancy’s system. I also think one of the keys has been some of the younger guys really taking a step up, in particular John Houston. And there are others like Wole Betiku, Connor Murphy, all of a sudden there is a lot of size along the defensive line, a lot of youth but a lot of size.”

GP “You mention Houston at linebacker, I liked hearing Darrell Rideaux talking about how he thinks linebacker is the position that will benefit the most from the experience with Clancy. And Greg, when I look back at the secondary, we may have lost Adoree’ but I see a lot of experience returning”

GK “Yeah, I don’t understand people saying the secondary might be a question because Adoree’s gone. Don’t get me wrong, Biggie is going to have some big shoes to fill in terms of expectations but the reality is with Hawkins and Tell that these guys are really good. I liked the comment from Clancy when he called Hawkins the consummate pro. My only question comes from Jackie Jones, nobody questions his ability but he’s got to continue to improve because teams are going to test him. Hopefully he’ll be able to blend his natural ability with what he’s being taught on the practice field.”

GP “Greg, let’s come right back to you with your thought on what is standing out”

GK “I’ve been intrigued by the evolution of the tight end. Some years back everybody was screaming that we never used the tight end. Now we have an abundance of talent, and they are part of the strategy. Sam Darnold will throw it to them, he doesn’t care who gets it. There is a question right now with some of the injury status. To go over where things stand, Daniel Imatorbhebhe has a hip flexor, Tyler Petite is going through concussion protocol and Josh Falo has knee issues. The ones who are healthy are Cary Angeline and true freshman Erik Krommenhoek (photo above). The guys who are healthy are making statements, and Helton is hoping to get some of the others back by the mock game in two weeks.”

GP “You really see the added bulk with Petite in the upper body. And Johnny, I’ll admit I did not expect to this see with Krommenhoek in terms of what he’s shown as a pass catcher.”

JC “Erik has been one of the surprises of the incoming freshmen, that’s for sure. He didn’t get a chance to catch many passes in his high school offense so we’re seeing something right now that wasn’t really expected. But I think the key for the group is Imatorbhebhe to see when and how he comes back. He has a chance to really light up the stat sheet as the go-to-guy behind Deontay Burnett”

GK “Last thought on Krommenhoek, for those of you who are senior citizens like myself, the way he blocks and catches reminded me of Bob Klien and Bob Miller, two farm-tough TE’s from the 67 national championship team.”