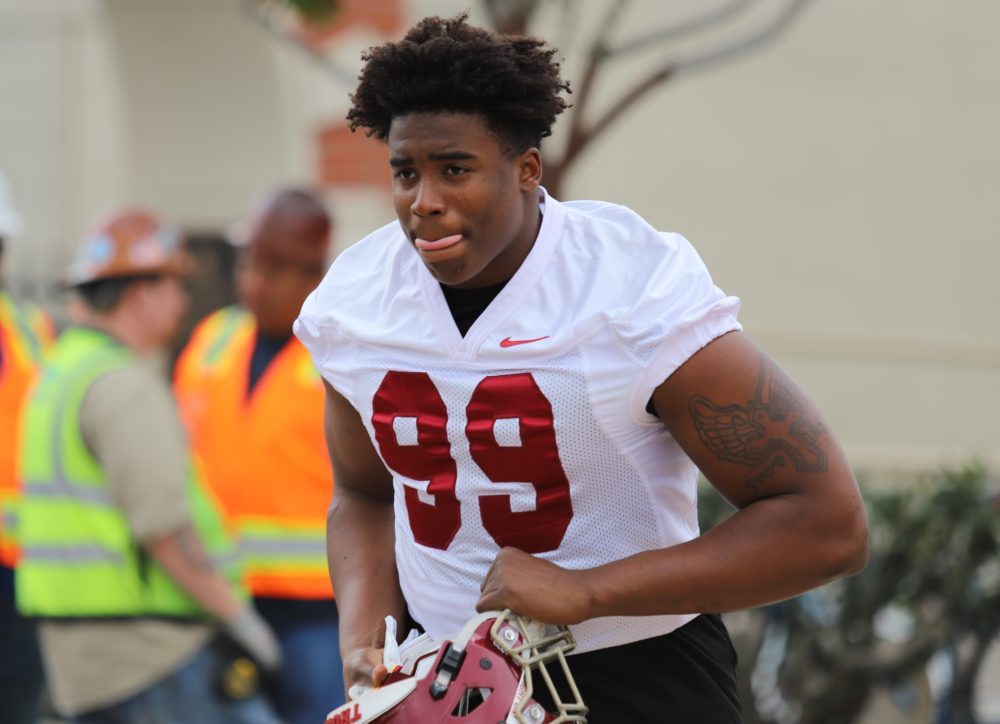 This week, we tackle questions from readers regarding the Pac-12 championship game, quarterback and cornerback recruiting, the conference’s chance at a playoff spot, a look at the USC linebackers and other topics.

A: The Pac-12 championship game will be a “home-hosted” game this year. The conference has said it will take place at the stadium of the higher-seeded team.

Q: Erik, Do you think that SC brings in a second 2022 QB (AJ Duffey), now that Devin Brown has committed? There seems to be conflicting opinions on whether they are only taking one QB in the 2022 class. Also, does SC have a serious chance at Byron Cardwell in the 2021 class or has Alton McCaskill become the main target?

A: Quarterback commit Devin Brown (Queen Creek, Ariz./Queen Creek) stated pretty clearly that the USC coaches told him he’d be the only quarterback they plan to take in his class. Duffy was recently quoted as talking about the schools he has been in contact with the most and he did not list USC among a dozen or so schools.

I do think Cardwell (San Diego/Morse) is still in the picture for USC, but McCaskill (Conroe, Tex./Oak Ridge) has been awfully impressive early in his senior season. In Oak Ridge’s most recent win, he had 78 receiving yards and 71 rushing yards. In the season-opener, McCaskill had 229 total yards, including a 99-yard touchdown run.

This is one of those situations where California not playing high school football this fall really makes it impossible to evaluate both players side by side during their senior seasons (obviously there is plenty of tape from junior year and before that). I think I still prefer Cardwell in terms of how he fits the offense and being an in-state guy, but I think pairing McCaskill with Brandon Campbell (Katy, Tex./Katy) would be a really effective 1-2 punch as well.

With McCaskill very likely to commit first, as Cardwell has consistently mentioned wanting to take visits, I think USC has to treat him like a top target in order to not potentially miss out on both.

Q: Erik … In your opinion, with the commitment of Phillip Riley; does that affect the decision of Ceyair Wright?

A: No. Ceyair Wright (Los Angeles/Loyola) is one of a small handful of local must-gets on the defensive side of the ball in this class and that hasn’t changed since the very beginning of this recruiting cycle. It’s clear USC coaches wanted to load up in the defensive backfield in this class and they’ve done just that. With Jaylin Smith (Mission Hills, Calif./Alemany) likely ticketed for nickelback, Prophet Brown (Monterey Trail, Calif./Elk Grove) and now Philip Riley (Valrico, Fla./Bloomingdale) are the outside corners.

Isaac Taylor-Stuart and Olaijah Griffin are heading into their third seasons already, Greg Johnson is in his fourth, and Chris Steele likely sees himself as potentially a three-year college player. There could be some significant holes opening up back there in the next couple years, so getting a big, talented group on campus next fall is an important part of this class.

Q: Given the unique and bizarre set of circumstances under which the 2020 season is being played do you think there are any on-field results that could lead to Coach Helton’s dismissal?

A: 0-7 and a complete emptying of the recruiting class might do it, but I don’t think there are any realistic scenarios that would lead to that decision this year.

Q: Erik – does AVT come back? Would we expect to know prior to camp starting? CH eluded to making some personnel updates the first day of camp..Rather not have to wait that long.

A: I sure hope he does. After he announced and up until recently I hadn’t heard anything that made me truly believe he will. But there is at least a little bit of momentum in the conference with guys coming back (Oregon cornerback Deommodore Lenoir and Cal cornerback Camryn Bynum). I never held out hope that Jay Tufele would return after his announcement, but after the fall season was announced, it seemed to make a lot of sense that Vera-Tucker would return to get some game film of him at left tackle and try to solidify a first-round grade. But it’s also possible that he relies on his outstanding film at left guard and has heard enough that he’s already comfortable with where his draft stock lies.

Q: Does PAC12 have a remote chance to place a team in the playoffs?

A: I’m glad you said “remote” because that’s about where I would put it. Things have changed a bit with Oklahoma and Texas imploding early in their seasons. But still, an undefeated Clemson, Ohio State and Alabama/Georgia teams are in with no discussion. That leaves a very, very tight path for a Pac-12 champion to walk and a don’t see an easy scenario where even a 7-0 Pac-12 champ picks up enough big wins to make it an easy selection over a one-loss SEC or ACC team.

The Pac-12 needs chaos over the next few weeks because based on the way the polls look right now, there will be very few ranked vs. ranked games in the conference.

Q: Frustrated about the continuing poor offensive line recruiting… Does the extra year of eligibility in 2020 give us a 1-year reprieve before things go downhill? If you were the head coach, what constructive things would you be doing to try to turn this bad situation around?

A: I don’t think USC can do much more than what they’re doing right now as far as recruiting the offensive line. They’re targeting the top guys and they’re going after them hard. Where I think they’re finding success is that they’re not skimping on bodies anymore. In the 2018 and 2019 classes, they seemed content to settle with who they already had after they missed on a top target. In the 2020 and 2021 classes, they’re on track to bring in ten offensive linemen because they had backup plans and kept chasing new targets, and I think it’s a good mix of guys who could play in their first or second seasons and guys who will develop and could contribute as redshirt sophomores or juniors.

Where USC is still struggling, obviously, is landing that marquee five-star or high four-star lineman. In the 2021 class, it was Utah’s Kingsley Suamataia (Orem, Utah/Orem) and Arizona’s Bram Walden (Scottsdale, Ariz./Saguaro), who both committed to Oregon. USC targeted and did well with both, but it wasn’t enough.

Recruits like offensive line coach Tim Drevno and they like assistants Lenny Vandermade and Viane Talamaivao, but I don’t think USC has an offensive line culture right now that linemen are sold on. Now, if the running game actually produces in Year 2 under Graham Harrell and the Trojans have back-to-back years of a first-round lineman in the draft, that’s probably going to start meaning something on the recruiting trail. When it feels like offensive line recruiting and development isn’t important, recruits (and other programs) pick up on that. Right now it feels like USC has addressed that, but it might not have a chance to pay off until the 2022 class.

As far as feeling the effects, this could be something that hurts USC immediately if the Trojans aren’t able to figure out the left tackle spot this fall. The Trojans are pretty thin across the line when it comes to experienced bodies behind the projected starters.

Q: Did LSU’s woeful defensive performance help or hurt their chances with Korey Foreman? I heard he was visiting LSU last weekend?

A: Foreman was indeed at LSU two weekends ago on another unofficial visit. He’s now been to LSU twice and Georgia once during this dead period, where he is allowed to visit a school on his own but can have no interactions with coaches or personnel. I don’t think any one performance is going to have much of an effect on recruits. There are pretty easy ways to recruit around something like that, and LSU is going to be able to take advantage of last year’s national championship season all the way through the 2021 recruiting class.

Most recently, Foreman spent time with USC quarterback Miller Moss this past weekend, as Moss continues in his role as another lead recruiter for the Trojans. Moss, Foreman, USC cornerback target Ceyair Wright and USC tight end target Michael Trigg were all able to spend some time together, as Moss pitched them on becoming Trojans.

Q: I know we haven’t had any real practices, but if you had to pick, who do you project as the linebacker starters and which players will be their featured backups? Any breakout surprises at the LB position to watch for?

A: There are so many linebackers who can play so many different spots in this defense, so I think we could see more than a few guys working at different positions.

In the one spring ball practice we saw, Drake Jackson was working at that hybrid B-backer position, so I’d expect him to continue working there. I think Abdul-Malik McClain is really suited to that spot as well, as he’s one of my picks for a breakout guy.

Inside, I’d guess Todd Orlando would like to find a spot for a veteran guy like Jordan Iosefa at the middle linebacker spot, and Iosefa probably should be all the way back from the knee injury suffered prior to last season. And then I could see Palaie Gaoteote as the weakside, Rover linebacker. But that all gets thrown out of Solomon Tuliaupupu shows up and plays how I think he might show up and play. This is a guy who could absolutely demand playing time and with everybody starting from scratch under Orlando, Tuliaupupu could easily win a starting spot if he’s fully healthy.

I’m interested to see Kana’i Mauga in this defense. I think he could be really good if allowed to simply play downhill and attack the line of scrimmage. And I also think Ralen Goforth is capable of doing big things during his USC career. I’m curious to see if there is too much veteran traffic in front of him, or if he shows up ready to get some real playing time.

USC’s top 2023 quarterback target is Malachi Nelson (Los Alamitos, Calif./Los Alamitos), who will likely battle with Arch Manning (New Orleans/Isidore Newmon) to be the No. 1 quarterback in that class.

Nelson won’t be regarded as a scrambler, but I’d definitely say his athleticism makes him mobile.

Making the right read and a good throw is always going to be the No. 1 thing Harrell looks for in a quarterback, so mobility–as in scrambling for yards–just isn’t going to be seen as a premium trait for this staff. Class of 2022 commit Devin Brown (Queen Creek, Ariz./Queen Creek) said the USC staff likes his athleticism and that’s something he’s been working on, but he’s not a guy who is going to outrun a defense for huge gains down the field.

It’s nice to have a quarterback who can pick up big chunks of yards with his legs, but we saw with Jack Sears that if you can’t consistently make the right reads and complete a very, very high percentage of passes, you’re not going to play in Harrell’s offense.