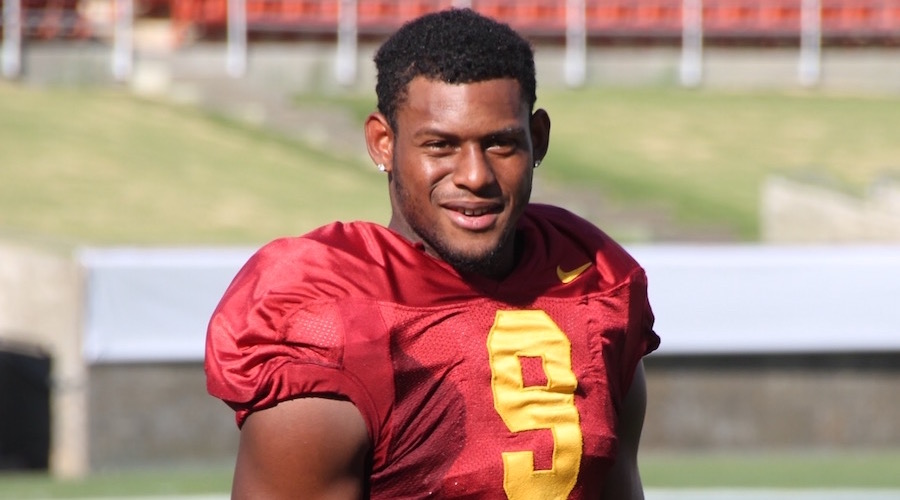 In this week’s edition of the mailbag there are several questions relating to the Alabama game, including an opening question about the Tide pass rush from a former Trojan linebacker:

GP: Viewpoint regarding whether the O-line can protect Max in the pocket in 3rd down situations? ‘Bama is wicked fast off the edge and will blitz one ILB occasionally. Zach has trouble with speed guys off the edge too. thx, Kevin B.

This might be the biggest key to the game Kevin and it’s a legit challenge for the Trojans. As you say, this is a strength of the Alabama defense as they return 5 of the top 6 sack leaders from last season (and 3 of the guys in their front seven are ranked as the best in the nation at their position). And the uncertain status of a veteran like Chad Wheeler at left tackle is bad timing for the Trojans, no matter how well prepared Chuma Edoga may be. The good news is that Chuma is pretty athletic with good footwork. Zach Banner will see a lot of Tim Williams in this game and there might not be a faster rusher off the edge in the country. No matter what I’m looking for the SC coaches to give Max Browne a lot of help with quick options, particularly to the tight ends.

Are we likely to see Adoree and Biggie playing substantial man-to-man defense this year? And, if so, what type of man coverage should we expect? Adoree is a remarkable athlete, but he wasn’t always very good with his hands last year, as he seemed to rely on his speed to run with receivers rather than knocking them off their routes. (A strategy that cost him against ND.) Are we going to see bump and run from those guys? Are they going to play man coverage but off the ball?

Yes, a staple of the Clancy Pendergast defense is corners playing man-to-man, and Helton talked about that added workload as being part of why Adoree’ focused on defense in fall camp. I think this plays well to Adoree’ and Biggie, with Biggie being the more physical of the two in terms of matching up with the bigger receivers but Adoree’ also showed an increased level of physical tackling at several points in camp. You bring up the Notre Dame game and the feedback from NFL folks about that game told Adoree’ there is work to be done in his development. By focusing on defense this year it gives him a chance to be the best corner he can be, and the Trojan defense should benefit from that decision.

USC scores with no time left in the game; the score is now 27 Tide – 26 Trojans. Do the Trojans kick to tie the game and take their chances in overtime or do the Trojans go for two points to win the game??

Justin Davis power run off the right side behind Zach Banner and Viane Talamaivao for the win.

Does WLB need another body thrown into the rotation, or do you think they stick with who’s there now?

I think things are fine at the moment because you still go three-deep with Hutchings, Powell and Houston. If Masina ends up being absent for a longer period of time then maybe there is the thought of moving someone else but I don’t think we’re there just yet.

From this point in the season … I can see us being the underdog in 6 games (Bama, Furd, Ore, Wash, UCLA, ND) … which projects to a possible 6-6 not counting a game where we might trip up. How do you see it?

I think there is a lot of uncertainty about how this season will play out because we just don’t know what to expect from this team with a new staff. Yes, the schedule is very tough and if there is an adjustment period with these new coaches then the record could be pretty mediocre. But if things come together nicely and the team finds an identity there is plenty of talent to make a nice run.

Garry, Can you light a fire under John Houston we need him more than ever. He was a 5 star guy coming out of HS.. It’s his time to shine no more free lunches.

That’s a pretty tough last comment for a redshirt freshman who has yet to play a game (and who battled a back injury throughout his redshirt year). I do think John gets some limited time in the linebacker rotation this year but more than likely his biggest contributions will come on special teams.

Name 3 players that you believe we’ll be praising, and why, after the game this week

1) JuJu Smith-Schuster after he puts up 8 catches for 167 yards and two touchdowns. 2) Cameron Smith after he reminds us of why he was the Pac-12 Defensive Freshman of the Year by plugging the middle of the defense all day and not allowing the Alabama rushing attack to get going. 3) Adoree’ Jackson and Iman Marshall for limiting the explosive plays from a very good Bama receiver group.

Should we expect a drop off on the offense? Ten out of 11 positions improved from last season, while USC is breaking in a new QB. With all of Max’s talent, has he passed where Cody left the team, leaving no noticeable “drop off” or will we see Cody’s years of experience (and Max’s lack there of) at the start of the season?

Huge question. At first thought there should not be a drop-off because of the overwhelming amount of experienced guys surrounding Max. If utilized properly while spreading the ball around it’s easy to see this offense putting up a lot of points. But we just don’t know about Tee Martin as a play caller, or what the identity will be with input from the Helton brothers. And, of course, we don’t know yet how Max will respond in this type of game action. The game on Saturday certainly offers Max a chance to start off with a bang a la Matt Leinart in 2003 on the road against Auburn.

If I wanted to create a drinking game when we were on defense, whose name do you think I will hear the most?