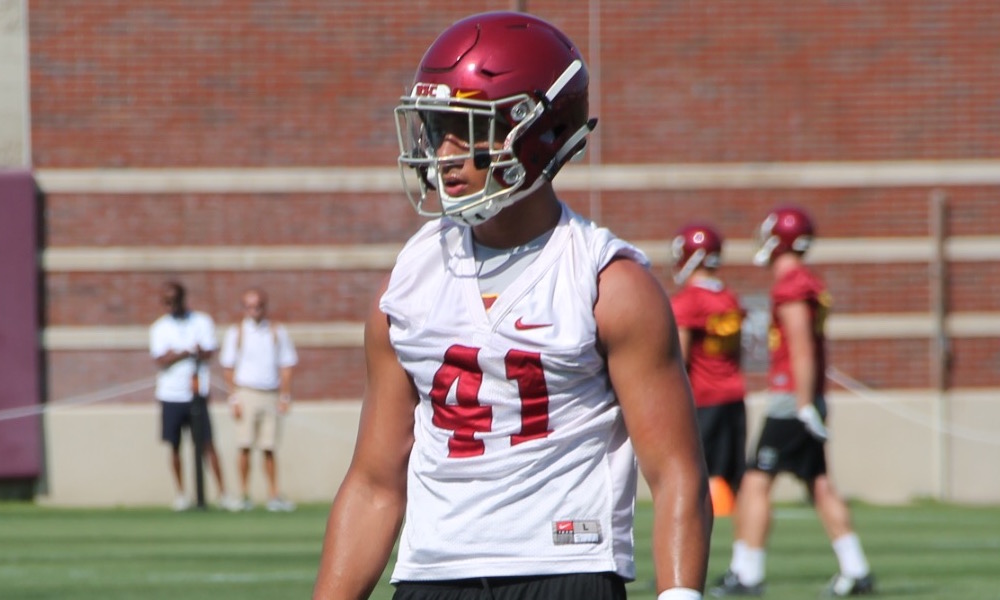 I still think it will be JT but based on what we heard from the coaches this week I wouldn’t rule anything out once the mock game is played on Saturday.

Garry, based on what you saw in the Fall scrimmages:

What ratio of pass to run do you expect to see and what ratio of QB under center versus out of the gun do you predict we’ll see?

The coaches are still preaching balance so I think it will be close to 50/50 run vs pass, hopefully slanted a little more to the run early on. I don’t expect to see the QB under center a whole lot.

How does JT compare to other recent qbs when they came in their freshman year such as Sam, Max Browne, Sears, etc.

The one I would compare him to the most is Matt Barkley, in large part because of the mental preparation they both got at Mater Dei. And I would even put JT ahead of where Barkley was, which is saying a lot. In terms of physical skills, JT throws the deep ball with accuracy as well as any of them but those others were all pretty advanced too and there’s a reason they were so highly recruited. One area that we don’t know if JT can match a guy like Sam is how unflappable Sam was once he got on the field, that’s just something you can’t judge until they actually play.

We’re getting closer to kick-off and the excitement is building. Unfortunately there are still a lot of questions. I would have thought that by now we would have more answers but hey, every year is different. I’m actually very surprised that the O line hasn’t already been settled and working together more effectively. Maybe it’s just a matter of getting lots of guys valuable practice reps considering all of the talent. I know we have the studs but something still seems to be missing. My question is; have you detected by way of observation or discussion anyone on that line that fills the Freddie Matua role? (may he RIP) By that I mean the guy who lights a fire under the unit and makes them want to kick some butt? I have not read or heard of anybody doing that. These guys, while talented, have no vocal leader. I hope I’m wrong hence the question to you.

No, I can’t say that I’ve seen a Fred Matua-type fiery guy, and I get the point you’re making. Fred definitely brought an energy that you don’t find too often. My favorite comment on Fred when he was being recruited was the question of him playing d-line or o-line, one writer said “it doesn’t matter to Fred. He’s just going to line up and kick the ass of the guy across from him”. I do think there are younger guys like Alijah Vera-Tucker and Jalen McKenzie who could end up playing that kind of role in the future, but not yet.

Do the coaches have a clear strategy on how they will handle the new redshirt rule? Will they split the guys up and try to get a few in throughout the season? Save them all until the end of the season and basically have an expanded roster for the last few games. I’m thinking the really together coaching staffs will have a clearly defined Plan A, B and C versus seeing how it goes and possibly squandering this boon the NCAA has given them.

Helton addressed this earlier in camp, and basically said he wanted to judge how they progressed in camp before making those kind of decisions. Helton is pretty good about developing those kind of plans so I’m guessing they will be set soon but with the ability to be flexible as needed. And I agree about this being a boon, I really like the new rule.

Practice being what it is with the same guys lining up against the same guys on defense and the defense has seen the offensive alignments and formations countless times, is the OL really that weak on pass blocking? I know there were a lot of sacks, but those are “practice” sacks and after the coaches got on the QB’s to unload quicker, their passing stats got better and sacks fell. What do you think?

You also have to factor in the fact that Clancy Pendergast is one of the most creative coaches around in terms of bringing different pressures and the pass rush is one of the strengths of this defensive unit. It’s doubtful the o-line is going to see too many groups better than the one they face every day. With that being said, I don’t think there’s any question the o-line has looked better run blocking than in pass protection so far, and that’s going to be something to watch once the games actually start with a new quarterback. I do like the fact that we’re getting healthier with four of the five projected starters taking part in practice this week.

I have a practical question of some importance.

You must choose one of the following:

I don’t know that I’ve ever seen a more no-win question on the site. Did I make you mad in some way? Haha. OK, option 1. Can’t agree to anything that allows for UCLA to beat SC for the next four years, already lived through that in the 90’s and have no desire to repeat (although the income doubling is a nice thought). Option 2. Wow, what a laughable foursome. I’ll always remember Cade going around left end on the final play of the 98 game when they had it well in hand, so classless. And to be stuck as well with Kezerian and Strand? My goodness. What does it say when Rosen is probably the least offensive of those choices? No thanks.

Will HH tell media before Saturday what team already knows? JT is the QB.

It doesn’t look like it. Helton said on Tuesday that an announcement will likely come early next week after the mock game and after he has talked with the three quarterbacks and their families.

Hi Garry, do you know which coaches will be up at the booth and which ones will be at the sideline? My guess is that Tee will be at the both, but I will be curious to see what Bryan Ellis and Tim Drevno will be doing during the game time.

Since we haven’t been able to put eyes on any of the live action from our practices and scrimmages, can you give us an overall view of the OL.

Can they get push against the DL for the run game? Can they pass block 4 down linemen or even 5? Have they been able to pick up blitz packages? Are they primarily straight forward, or can they pull and run?

These are questions that really aren’t going to be answered until we get into game action. Have we seen times in camp where they get a push against the DL? Yes. Have there also been days when they didn’t? Yes. And that can apply to all of the items you mention. I do think the run game is ahead of the pass protection right now based on what we’ve seen. A big key for me right now is that the line is relatively healthy this week and hopefully we can see all five starters working together next week in game week practices.

Talofa my brother and appreciate all you do. Here’s my question. Pete Carroll was always so successful with the turnover margins game. Every year the team was in the top 3 because he practiced like crazy every practice for the defense to hit, strip, intercept and straight go after that ball. Does Helton or Pendegrast emphasize this kind of coaching during practices? I am curious if they were because of the talent that this defense brings.

Talofa. Yes, we see those kind of drills on a regular basis, trying to strip the ball or working with the DB’s on high-pointing the ball when it’s in the air.

How’s Connor Murphy progressing? Does he see time and if so, in what situations?

I do think he made some strides in camp. We saw him line up both at the DE spot behind Malik Dorton and at the OLB spot that he used to play behind Porter Gustin. His time is likely to come when we go to multiple down linemen sets such as short yardage.

Havent heard much about the coverage teams, how do they look? going to have some really good football players covering kicks. Will the new redshirt rule effect the rotation of players allowing more kids to see the field, but possibly hurting the continuity of the coverage teams or is the personnel just plug and play? I want the opponents pinned down as much as possible for this D. Last thing, Baxter doesn’t believe in the kickoff fair catch? Good for him. I have a really good feeling about our special teams this year. I was hoping for more from them and Baxter last year.

Helton talked earlier in camp about playing more veterans on special teams than we may have seen last year. I still think you mix in some young guys as a way of getting their feet wet but we’ve got plenty of guys with a little more experience who don’t have full-time roles and they should make up the foundation of coverage teams, guys like Levi Jones, Juliano Falaniko, Isaiah Pola-Mao. As far as hoping for more from Baxter, I’m anxious to see the impact now that he is focused 100% on special teams again after splitting his time with the tight ends last year.

GarryP, do you see the coaches playing the backups more this season, so we will eliminate the questions going into next year about who replaces who and create some experienced depth.

Yes, I do think that will happen. A lot of the back-ups are guys who have been in the system for a year or two so they have more of an understanding of what the coaches want than maybe we saw in the past. I think that will be particularly true on defense.

Toa’s snapping issues appear to have returned a little. Is this going to be OK? And if it doesn’t resolve at what point do we panic and adjust personnel?

I don’t know how much they’ve returned. There was one on Tuesday but other than that he’s been pretty steady this week. If they do pop back up again to the point where a change needs to be made then Brett Neilon would be the next center up, and Toa likely gets moved to another spot, but I don’t think the panic button is there yet.