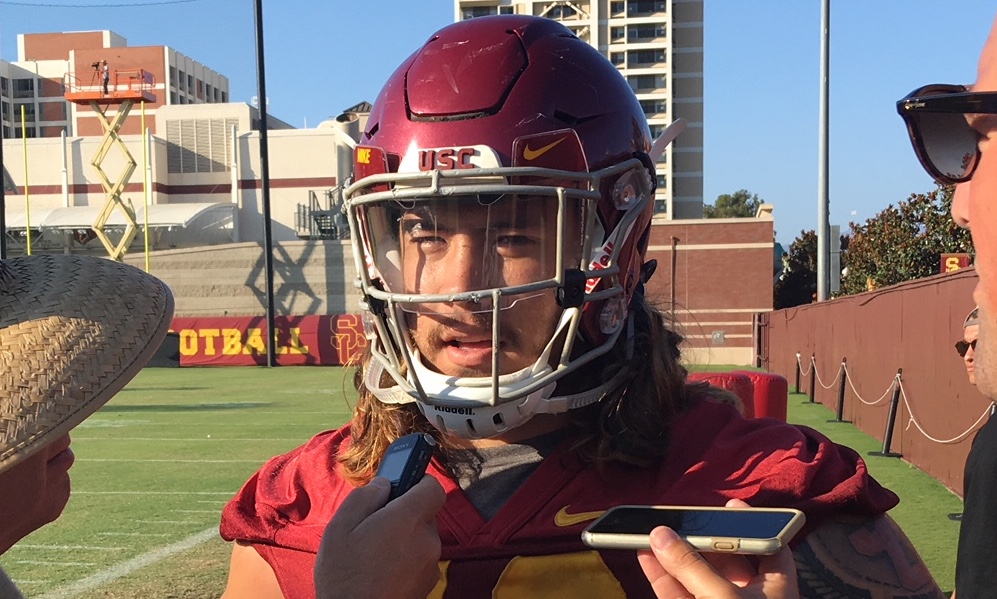 Garry — with the emergence of Porter Gustin playing QB at practice, should this concern or excite Trojan fans? Sure, having a QB built like a LB might be useful in close yard situations, but with three already talented scholarship QBs on the roster, this will undoubtedly muddle an already murky and ongoing QB battle. Competition is critical but to what end? I suppose we’ll just have to have faith in our coaches and keep an eye out for any new developments. Your guidance here would be appreciated. FO

Porter’s stint as a QB throwing to the DB’s lasted about 10 minutes in a post-practice session this week. The form was there but based on the accuracy I don’t think Clay Helton will be factoring Porter into the QB competition.

Garry, who are your early team captain picks? Will we see three on defense again and one on offense? I think all four will be seniors.

I’m going with Cameron Smith, Porter Gustin, Marvell Tell and Toa Lobendahn. I could also see Iman Marshall get in that mix in place of Tell.

With the QB competition being close between JT Daniels and Sears do you think Coach Helton will go with a two man rotation? Never know what happens in game situations and neither QB has played yet in a college game.

My guess is that Helton will pick one guy and stick with him but I also thought that two years ago and we all know how that worked out. It’s a big decision and my guess is we know a lot more about how it will play out after the second scrimmage on Saturday.

Sorry to put you on the spot.

Garry, if UNLV were tomorrow, who would be your starting QB?

J.T. Daniels. I reserve the right to change that if something drastic happens in the scrimmage on Saturday but based on what we’ve seen so far I think he is the choice.

Garry, who has stood out for the kick returns and punt returns on special teams and who do you expect that job to go to by Game 1?

I think it will be either Ajene or Amon-Ra for punt return but I also think Tyler Vaughns has looked good. For kickoff returns I will guess Velus and Amon-Ra. I know Carr wants to get in that mix but I would rather focus him on TB right now.

Will Markese Stepp see the field this year and who do you see being our #2 RB behind Carr?

Stepp is ready if needed, I really like what we’ve seen from him so far, but it would be ideal to redshirt him (or play him 4 games and redshirt him). Ware is the #1 guy right now so when/if Carr returns to full capabilities and is the #1 guy I would expect Ced to be next in line, with Vavae being a very good #3. It really is a good group of backs we’ve got this year.

Garry, what’s your take on Coach Ellis? He’s young but I have listened to his interviews and he seems to be very knowledgeable. How much influence will he have in choosing SC’s starting QB?

We’re going to find out a lot about him very quickly because he’ll play a big role in choosing the new starter and coaching him up. Helton said after the first scrimmage that he and Ellis met with all the quarterbacks to discuss their status, and not that it’s a huge deal but it was notable that Tee (the OC) was not part of those talks. Helton clearly has a lot of confidence in Ellis and I can see why, he’s got a good understanding of what Clay is trying to do and they have similar styles.

Which, if any, of the players with the more minor or nagging injuries who have missed practice time do you anticipate being unavailable for the opener?

It doesn’t sound like Betiku is coming back anytime soon. Daniel Imatorbhebhe is a big one for me and your guess is as good as mine as to when he comes back, there just doesn’t seem to be a timetable. Gustin and Palaie have similar situations, they will miss the opener but should be back soon. Vorhees is all of a sudden a question mark, he’s supposed to be back next week so we’ll see. I will feel better when Cameron Smith is able to go through a whole practice, we seem to be getting closer to that. With guys like Pittman, Ykili, Bradley, etc we probably won’t know more until next week or game week.

Was Boobie Miles coming to SC?

Of course. Don’t forget, former Trojan offensive lineman Allan Graf was the 2nd unit director and football scenes coordinator for the movie so it’s no coincidence that USC got a shout out, and that the piece of recruiting mail from UCLA was on the floor.

Please tell me Stepp doesn’t have a concussion. Speaking of injuries do you see Vorhees rotating 50/50 with Tucker at RG due to the knee flair ups? And, please also tell me that Toa is OK snapping the ball at center now.

I hope not on Markese but you never know on concussions so we’ll see what his status is with the protocol. If Vorhees is cleared and ready to go I think he’s out there full-time but the good news is that AVT looks ready if needed. We haven’t really seen any snapping issues in the last few practices, at least not like we saw last week. Looks like it was just a matter of shaking a little rust off, perfectly understandable for a guy who hadn’t played the position in two years.

C0ach Helton has clearly toed the “wait and see” company line thus far with respect to evaluating the three quarterbacks. Do you think he is doing so objectively, or is he being overly cautious with anointing Daniels too soon? I understand there’s a lot of camp left and that he and Sears have both had up and down moments, but by all media accounts Daniels appears to have the best total camp body of work, as well as the highest apparent upside and “highlight” moments. There’s part of me that wonders if Fink – with two full years in the program – had performed as JT had thus far, if Helton or the other coaches wouldn’t have already named him the leader or given him more “starter”-esque reps in practices.

I think he’s handled it right, and that includes giving all 3 equal opportunities this Saturday in the 2nd scrimmage. No matter what happens, all 3 should be able to say they were given a fair shot through the first two weeks of camp. But after Saturday, however, I think it will be justified to either name a guy or narrow it down to two because the first game is two weeks away and you need to begin getting a starter more reps.

Jay Tufele is getting a lot of attention for his play in camp (which is great to hear). Which brings me to Marlon Tuipulotu. How is he doing as he returns from the back injury. Does he look to be in the rotation come game one (or beyond)?

Marlon is back and part of the rotation at nose, which is great news. We’ve primarily seen Pili as the starter at nose, and Marlon has been the main reserve more often than Jay, who is getting time both at end and nose. Those three are all looking good, such a solid foundation in the middle of the line.

This is the least excited I have been during a preseason in several years. Am I finally becoming a realist? Or am I going to be pleasantly surprised this year? I was predicting 9-3 for this year, btw.

I think there are a lot of people feeling the way you are right now. The optimist side of me says that you will be pleasantly surprised by an offense that is energized by a QB in JT Daniels who adds a downfield dimension to the passing attack and is supplemented by a good group of backs who can move the chains. The flip side of that comes if the o-line continues to struggle in “big boy” match-ups as we’ve seen lately. I think that is the biggest challenge for Clay Helton and his team in looking to take that proverbial next step, and we will find out soon enough.

Building on my question from last week about cross-training o-linemen. With so many offensive linemen sitting out with bumps and bruises through camp, have they been giving Toa any reps at guard or tackle? Seems like they should get him ready to slide over in case injuries and his snapping issues both persist.

We’ve only seen Toa at center, which I think is the right move because he really hasn’t played much at the position over the years and we need to get him as many reps as possible at the position he is projected to play.

How’s that new OL transfer from JC doing so far in camp? Being a late arrival, I’m sure he is still learning the playbook, but is he flashing the physical and technical abilities to be a contributor in the near future?

We haven’t seen Bernard do a whole lot. He got here late and is just learning things, I don’t anticipate him being a contributor anytime soon but we’ll post updates if he start to make a move.

How is Lynn Swann evolving? Do you see him maturing to a point he could start asserting himself toward addressing some of the conference issues such as scheduling and referees?

That’s a good question because we haven’t really seen much from Lynn in that regard. We mostly see him giving speeches such as yesterday before the media Coliseum tour but he’s not out front a lot as the AD on conference-wide issues that impact USC.

Have you seen much of the Drevno power running scheme with two backs and QB under center? Has it been effective against a defense still lacking Smith and Gustin?

Yes, we do see some of the two-back sets, as well as some under center (although probably not as much as many would like) and I think the power run game portion of the offense has been solid this fall.

I think SC will be in every game this season to win. The talent is better than the teams on our schedule. I think our record will depend on coaching and not the players. If we get the coaching, SC could run the table with a few close wins.

I don’t expect us to be worse than the last couple of seasons. I just don’t have any expectations that we will be better either. And the last several seasons I have bought in to the hype and got my hopes up. Not going to do it this year. I’m Missouri now- “Show me”

I’ve talked to several fans who are taking the Missouri approach to the Trojans this year. Fair enough.