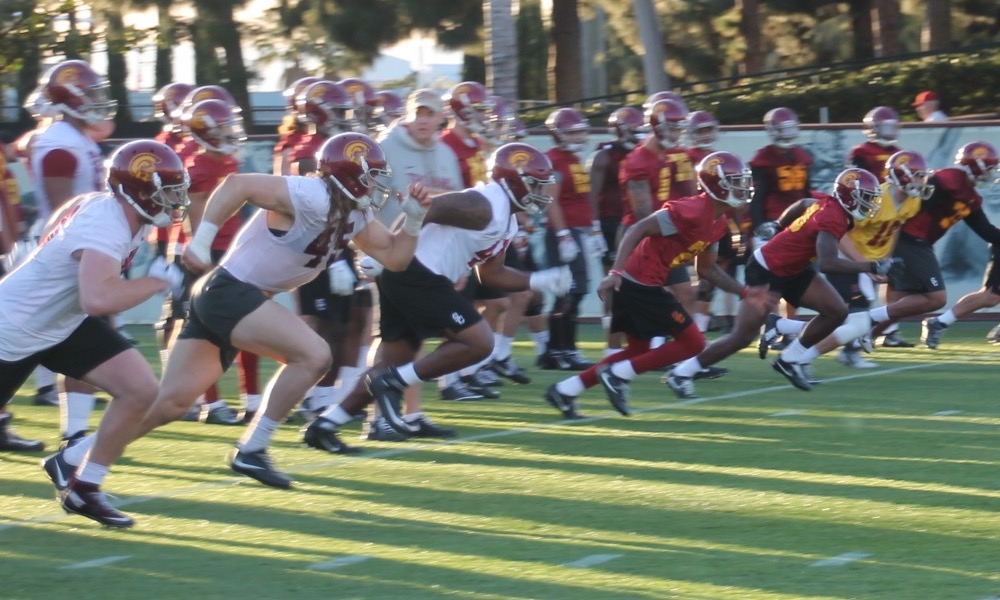 We haven’t heard much about Bubba Bolden yet in the spring. How is he doing? In your opinion who looks the best for the open safety spot to-date, from an absolute standpoint? Bubba, Ykili, C.J., IPM, or Talanoa?

I think Bubba has been fine. I really like his playmaking skills and I think he’s just one of those guys who turns it on when the lights are bright. I do think he will face some competition for that open spot with Ykili Ross, who has the confidence of the coaches this spring to have him at safety at times, and at slot corner at times. Can’t wait to see this entire group in fall.

– Frank Martin: Should we be surprised if he transfers after this year? Doesn’t seem to be on the 2-deep anywhere (I think there will be guys who will listed as a backup in multiple places)

– Pie Young: Any chance he ever plays as a Trojan? Velus, Sidney, and ARSB will all be ahead of him at essentially what ever position he would play, plus Cook, his very close friend, is likely transferring.

– Jacob Lichtenstein: Super high on this kid. How is he looking thus far in the spring practices?

This is an important spring for Frank because the opportunity is there to establish himself as a key reserve at guard. We’ve seen Jordan Austin be able to step in when needed, and I like what I see so far from Alijah Vera-Tucker, but it would be a nice bonus to have someone like Frank step up and show that he is ready to contribute now too. Helton has said guys will get chances with the 1’s and 2’s, we’ll see if Frank is ready.

I don’t know on Pie. Talented athlete and seems to really enjoy being at USC but is he a man without a position? So far the answer to that is yes until proven otherwise.

Jacob has added some bulk this off-season so he is looking more the part (I thought he came in a little slight and needed to bulk up) but he’s also been sidelined the past few days so he hasn’t been in action. I would look for this to be a development year while Malik Dorton mans the spot and hopefully Jacob could be in position for more this time next year.

With Marlon and Brandon looking so good last year as true freshmen and I’m assuming stronger already in their saecond season, what is Jay Tufele looking like, does he have the strength and drive of the other two? Do you think he takes the end position over? I’m hoping to see all three in and dominating at the same time.

I think Jay looks good this spring. He’s playing as the #2 NT with Marlon being out of action this spring and he’s a thick load in the middle of the line. We also saw him at DT last fall so he has the ability to move up and down the line, which gives the possibility of seeing all three at the same time in some run-heavy packages. I sure like the thought of that.

Has it been stated by SC that Cook will be transferring? I know it’s speculated with him not being around in the Spring but any chance you think he plays this year?

Helton was vague when talking about Cook by saying he would explore options to transfer but he wouldn’t commit to the possibility of him coming back. My read of the situation is that Jamel will be gone, we haven’t seen him at practice even as a spectator this spring.

Frank was running with the 2’s at LG last week during some drills. This is an important time for Frank because he hasn’t made much of an impact so far and we need reserves to step up at guard.

1. With Jackie Jones suspended for spring, is there any chance that he loses his starting spot going into fall camp?

2. I know it’s early and both QBs are still getting their feet wet as potential starters but there haven’t been any “glowing” reports of their performance thus far. Should fans be worried/when should fans start getting worried?

Yes, I think there is a chance Isaiah Langley could take the starting corner spot. Langley can be an effective corner and he’s getting all spring to settle in and get comfortable as the starter, and for the coaches to get comfortable with him. So much will depend on Jackie and how he responds to his situation. There’s no doubt about his talent but there’s also no doubt that his behavior and lack of discipline are in danger of costing him.

That’s fair to say there haven’t been glowing reports so far on the QB’s but I do want to give them more than one scrimmage day before getting worried. Both of these guys are what I would describe as “gamers” who are going to look better in live action than in practice drills, at least that’s what we’ve seen previously from them. Let’s hold this discussion at the end of spring to see where we are and hopefully we’ve seen some progress.

How is Ware doing at RB? He seems to be unable to escape the first defender when I’ve seen him in action. With his buddy Rojo gone, I expect him to be eager to perform in his own right.

I like what we’ve seen so far from Aca’Cedric. He said he’s up to 215 pounds, and that’s good weight for him to be an effective between the tackles runner, which I’ve always thought is the strength of his game. He’s a pounder who is going to smash for 3 yards, 3 yards and then burst one for 15. I think he’s ready to take that kind of lead role as a senior, and if Carr and Vavae are healthy in fall it should be a solid trio to throw out there.

You mentioned that Hufanga reminds you of Sua when he was at safety. With the safety spot crowded, is there any chance Clancy would experiment with Hufanga in a hybrid LB role (playing close to the LOS) like Sua had done?

We haven’t seen any sign of that and Clancy’s scheme is different than the one Justin Wilcox employed which put Su’a in that position. I certainly think Talanoa could do it if needed, he’s just a football player.

I’m sensing an imbalance between the overall depth/ability to reload on the Defensive side of the ball, verses the Offensive side. Granted, when you lose a QB, the offense is always impacted more than any position on the defense. But even if Sam was returning, it feels like the Offense has a bigger hill to climb to be ready for game #1. If you agree, do the Trojans need to put a renewed emphasis on the offense in upcoming recruiting periods?

The offensive side has suffered some big losses with the leading QB, TB and WR all leaving early, and the top TE not really being available. On top of that we had three reserve OL leave in the off-season. Those are significant losses and it’s showing right now. The skill player depth should be fine in the fall IF everyone is healthy (having Carr, Vavae and Daniel Imatorbhebhe back will go a long way). I do think there will be an increased emphasis on offense in recruiting this year for positions like OL, TE and TB. Thankfully it’s a good year for talent at those spots.

Back up question.. which of the three in your opinion has the highest ceiling or is it way too early to tell

How about our record going into game four

2. I think JT has the highest ceiling based on what I’ve seen in HS, I would put Sears next and then Fink. I really like Jack’s game and I think Fink is such a good athlete so any of them are capable of earning the job coming out of camp. But if you’re going to ask me long-term, I think JT will eventually be the guy.