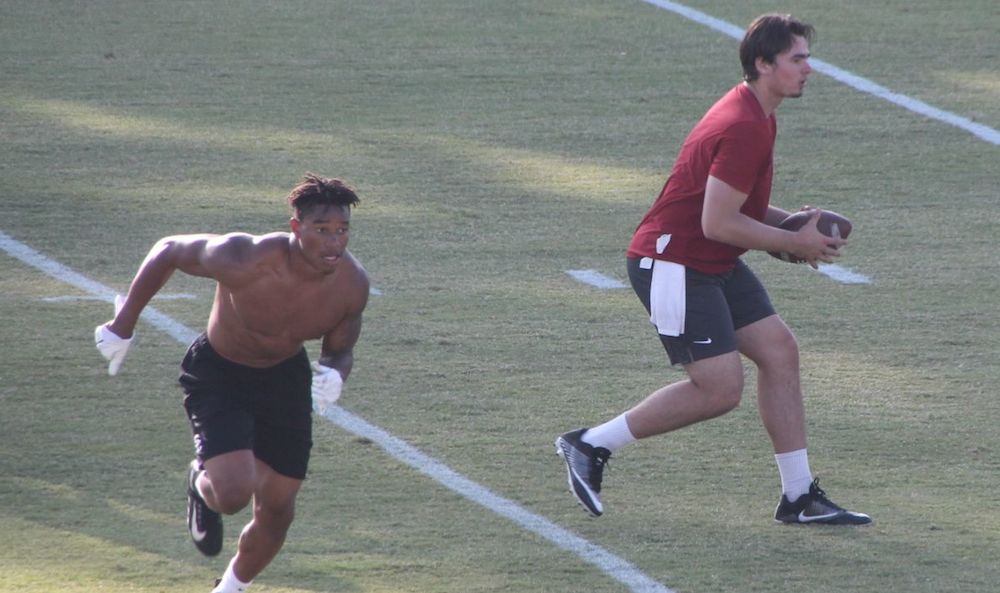 Have heard nothing about John Houston at PRP. Is he still keeping his weight around 225-230, and how has he looked?

Other than JT Daniels, what freshmen are starters by the end of the season?

My guesses: I suspect Amon Ra has a real shot. I also think Palaie has too much talent to keep him off the field. And I don’t know if Clancy will be comfortable trusting a youngster at corner, but I’d keep an eye on that corner spot opposite Biggie. I think ITS, Griffin, and Greg Johnson could make some noise over there.

I think Amon-Ra is the starter in the slot sooner rather than later. Velus is the likely other option right now but Velus is a guy who will go deep or run fly sweeps, Amon-Ra is showing the ability to be a more complete option and I just don’t see how he stays off the field for long. As for the other corner spot, I personally think Isaiah Langley hangs on to the spot but if anyone is going to challenge from the young guys I would say Greg Johnson first and Olijah Griffin second. With Palaie (and Solomon) I think the only spot they could possibly move into would be WLB where Houston is, but I also don’t think the coaches are in a hurry to move Houston out with the way he was playing by the end of the season. Of course, those two freshmen certainly have enough talent that you don’t rule anything out but I think a heavy special team presence and back-up snaps at linebacker are the first step and then let’s see what happens after that. The other name I would throw out is Talanoa Hufanga to possibly start opposite Marvell Tell, I just wouldn’t want to limit that young man even in a crowded safety spot.

Hypothetical scenario, Garry. Let’s say none of the QBs separates himself by mid/late fall camp. Would you use the UNLV game as a ‘’live bullets’’audition and thereby risk a repeat of Kiffin’s Wittek/Kessler fiasco? Or do you declare a starter by mid-camp and hope you didn’t pick the wrong guy (as one might argue happened 2 years ago)? I would expect Helton to do the latter, but what would be your inclination?

It’s a fascinating topic because there are so many ways it can go. Based on what we’ve seen so far I would lean toward picking a guy in mid-camp because I think that choice would be JT. Maybe things change once camp starts but that’s the way I see things right now, and if Helton ends up seeing the same thing then you go ahead and make the move. When we talked to players two years ago, the overwhelming majority saw what Sam could do on the field and they knew he probably should have been the choice, even while they all respected the heck out of Max Browne.

I’m liking Markese Stepp more and more. A big, agile back with body control, soft hands, and light on his feet is a beautiful thing. Jerome Bettis and LenDale had quick feet and a great first step. I haven’t seen enough of his first step. What have you seen from Stepp’s first step? No pun intended ; )

I would agree with your opening line. We obviously didn’t get any kind of real look at Stepp last year so these summer workouts have been our first chance to evaluate him, and even though it’s just shorts and shirts workouts I like what I see from his frame and the way he moves. He’s not stiff at all in his running style for a guy that big, and he is definitely a bigger back, not someone with inflated size numbers. He can catch the ball too.

My understanding is that we are pursuing Tristan Sinclair, Trent McDuffie, and Asa Turner with some vigor? If that is true, what positions are we recruiting each of them for?

Sinclair and Turner are both getting looks primarily with linebacker in mind. The initial thought going into spring evaluation for McDuffie was corner but with the understanding that his speed could easily translate to offense as well.

To me (other than possible play-calling/coaching-staff issues) the biggest question mark by far is the offensive line. IMO if JT isn’t the starting QB there ain’t a cow in Texas.

Specifically, one of the posters suggested that Toa move to guard and Neilon to center. So that means that Neilon is a better OL at this point than Voorhees. I don’t know if I agree with that. You might be weakening both the C and RG positions. What do you think Garry?

Also, who starts between Johnston and Jackson? Are Chuma and Brown ready to step up to be consistent, solid starters? Any possible dark-horse starter?

As far as JT, the last time I checked there are cows in Texas.

With all due respect to Brett Neilon I wouldn’t make that move either. I actually thought Vorhees showed a lot of promise and strength, and I’m really looking forward to seeing where he’s at this year with a season under his belt. At this point I still think Austin Jackson is the starter at LT but he hasn’t been going this summer and Clayton Johnston continues to look comfortable in the role. I really give Clayton a lot of credit for even making it a competition. Chuma and Chris Brown are the clear starters at their positions as veteran guys. As for dark-horse starters, I think the important thing is that we’ve got four fairly solid options as key reserves (Johnston at LT, Neilon at C, Alijah Vera-Tucker at RG and Jalen McKenzie at RT). You could even throw Jordan Austin in there at LG in a pinch as we saw in the Pac-12 title game. I wouldn’t expect any of those reserves to beat out the current starters as we sit here today but it’s more quality depth than we’ve had in a while.

Will Daniel I. be ready to go for the start of the season? He’s the one guy at the TE position for USC who reminds one of the Stanford TE’s who take such great advantage of height mismatches versus small DBs.

With a new QB in the fold (regardless of who it is) TE will be a very important position as a checkoff target or a short-yardage option on third downs.

I don’t know. It’s been real nice having Daniel taking part in warm-ups for the last few PRP’s, and we even saw him catch a pass in the flat, the first action we’ve seen from him in a while. But to say he’ll be ready for the season after so much missed time over the past year, I’m just not ready to say that yet. I’m hopeful though because his presence was missed so much last season. If he isn’t back, or not back at full speed, I think a healthy Josh Falo could be a guy to watch in terms of a mismatch. Don’t forget that the Trojans threw to Josh on a short-yardage pass to get the first down that ran out the clock in the Pac-12 title game, not a small moment for the true freshman, and I still think Falo’s true value will come with his ability as a downfield option.