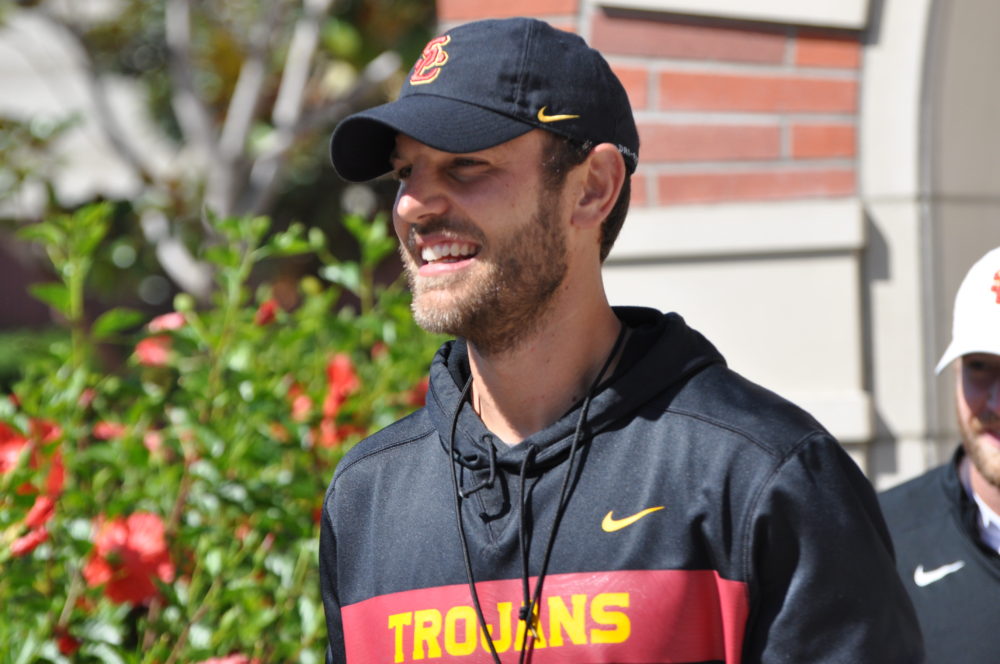 A: This question was posed before reports came out Thursday that Rams assistant Joe Barry removed himself from consideration as USC’s defensive coordinator. But it gives a look at a few names that have been tossed around. Barry looked like the leading candidate for a while, and Rocky Long is intriguing because of his experience as a head coach and San Diego State’s defensive prowess under him. Long stepped down as head coach but he is still interested in coaching. According to a report, he’s been offered the San Diego State and New Mexico defensive coordinator positions, and while his name has come up in regard to several spots, including USC, nothing formal has materialized there.

I think Long would be a pretty safe, solid choice and would have an understanding of how to get quick results out of the USC defense. I don’t think you absolutely have to find a guy who is going to be at USC for a decade with this hire.

Q: Once USC hires a defensive coordinator, could there be more movement on the staff?

A: It’s definitely a possibility. Every coordinator wants to work with assistants he trusts and is familiar with. There’s also a defensive graduate assistant spot open, as well as another full-time opening that could go to a defensive coach (provided there isn’t a plan to bring in a designated special teams coach).

Q: Was a little surprised we hired a slot/TE assistant, which makes us overweight on the offensive side… Maybe it was done to show TE recruit Jack Yary and WR Gary Bryant that we’re going to emphasize the TE/slot more. Anyway, do we have any coaching slots left after we fill D coordinator and special teams?

If USC brings in a defensive coordinator and a special teams coach (with no other changes) that will fill the coaching staff. There’s always a chance that Helton could find a way to get special teams covered either with multiple coaches or someone who could handle that with another position.

Q: Is there any indication from the school administration that the football program should be a higher priority than it was under the past administrations? If not, where or what do you think will change that perspective?

A: Right now it’s pretty clear that from the top, the focus is on cleaning up USC’s image. We all spend so much time focused on the football program, it’s easy to lose track of just how much USC’s president has on her plate to clean up. That being said, I do believe the plan is to put some serious effort into revamping the athletic department. It took more time than just about everybody wanted it to or felt it should, but this week marked the start of a major shift in the athletic department overall and football program specifically with those firings.

I have a tough time with the idea of rooting for people to lose their jobs, but when you’re taking it as a view of the athletic department as a whole, how can the announcement of a wholesale change of direction not be seen as a good thing with the way things have gone the last few years?

I don’t think any newcomers can play without spring ball, too bad no early entries.

A: Alabama offensive lineman Scott Lashley just entered his name onto the transfer portal and that’s immediately an intriguing one. He was the No. 201 overall prospect in the 2016 class, and he saw time as a backup for the Crimson Tide last season. As a graduate transfer, he’d be eligible to play immediately (and immediately would mean against Alabama in the first game this fall).

As for starters next year, I’m more intrigued by what happens with the tackles this spring than any other position. I think the lineup you suggest (Jalen McKenzie, Alijah Vera-Tucker, Brett Neilon, Andrew Vorhees, Liam Jimmons) makes sense. I just don’t love the idea of planning to go through another season without utilizing Justin Dedich more. It was great to have him as a backup when Neilon went down, but if Neilon is healthy, every game Dedich doesn’t play would feel a little disappointing.

Q: Is Graham Harrell a candidate for the Hawaii HC job?

A: At this point, it feels like Harrell is a candidate for every job. He took a few interviews before he signed an extension with USC. But he interviewed with the Philadelphia Eagles for their open offensive coordinator position on Friday. A couple names have been reported as in play for the Hawaii job and Harrell isn’t one of those, but with this new NFL interest, that’s definitely something to watch.

Q: Erik, do you think there’s any truth to the beliefs of [LA Times’ Bill] Plaschke or that declares that Bohn and Folt have decided to clean up the mess in the athletic department before focusing on fixing the football program? It kind of makes sense and provides a ray of hope but Bohn and Folt have a long way to go before most of us will trust them to make the right moves for SC’s flagship athletic program. Please provide your insight about this. Thanks.

A: I believe it 100%. I’m not saying it’s right, because I do think you could do multiple things at once (and some of these decisions seem like they would take 30 seconds). But I understand the idea that you want to build a house from the ground up, and paint the walls while you’re still laying foundation. It’s pretty clear from Plaschke’s column that Bohn and Folt want to get the administrative part of the athletic program situated first before moving into individual sports. The hope appears to be that each time the right person is put it place, it will exponentially speed up the process of getting everything on the right track. It’s understandable that both Bohn and Folt have completely lost the benefit of the doubt when it comes to USC football fans, but there were some big moves made this week. Now we have to see what comes next.

Q: Erik, are you as concerned as I am about our QB depth? There’s no guarantee that Fink or Daniels won’t opt for the portal (Matt for a 2nd time), assuming Slovis is named starter. If either one goes portal, we’re literally two hits away from…who? We start out the season with Alabama, who will no doubt bring extreme violence, and Slovis’ blind side will have a new guy trying to keep him upright.

I believe you had mentioned we have an offer out to a QB recruit now, but that’s all I’ve heard in terms of options. Any other possibilities you’ve been hearing, either by recruit or transfer portal?

A: You have to assume that USC is going to play more than one quarterback in 2020. Two quarterbacks missed time due to injury last fall and the offensive line certainly isn’t guaranteed to be better after losing both starting tackles. There’s a reason every coach wants four quarterbacks on the roster and USC doesn’t have that right now.

That being said, it’s tough to see a graduate transfer looking at USC as a viable destination. It’d be one thing if Slovis wasn’t here and the only competition was JT Daniels coming off a bad injury. But grad transfer quarterbacks can’t swing and miss, and trying to supplant Slovis (and stay ahead of Daniels) would be really tough.

Q: Based on the 2020 game schedule, do you think the SC road record will be as pathetic as last season’s?

A:USC went 3-3 on the road last season and going 3-3 away from the Coliseum in 2020 would probably be a safe bet at this point (this is counting the Alabama neutral site game). Alabama, Utah on a Friday night and Oregon in November will be tough games and it’s tough to see the Trojans winning any of those. The Friday factor alters the Utah game, and makes it more difficult.

So going 3-3 would necessitate wins at Stanford, Arizona and UCLA — certainly doable. If the Trojans can grab one of those other away games, it should be viewed as a good away season.

Q: What is our future as regards a head coach?
Bring over a big name like Urban?
Bring in a promising coach with potential?

A: I do think eventually a big(ish) name is the answer. I do not believe it will be Urban Meyer. There’s just too much chatter that Folt will not let that happen. So that’s why I say bigish name, because Meyer is the big name. That’s my thought now, but I’d like to see what direction the athletic department continues to take to see if that still looks like a viable option.

Q: Any reason why the huge delay in finalizing our staff? Also, how secure is Harrell?

A: It’s a really tough environment to bring assistant coaches into. The idea of moving to Los Angles, potentially bringing family and uprooting your life for the hope of lasting more than 11 months is a tough sell. I think it’ll be up to USC to find someone willing to bet on themselves to get it right and use the opportunity to grab some spotlight and further their career. That’s exactly what happened with Harrell, and now he’s in a position where he can pretty much pick his next direction, or stick with the offense he helped create at USC.

Q: I rewatched the Iowa game and am more confident about our offense next year. Most teams will have trouble with containing our receivers and with slippery Kedon in there, we should score a lot of points. Now if we had a D.

A: The offensive line without Austin Jackson is more than a little worrisome. I think the line played fine overall last season, but clearly it can’t get quarterbacks injured the way it did in 2019. It would be insane if USC had the same injury luck at running back that it had last year, so that position should be improved. The wide receivers should still be strong even after losing Michael Pittman. And it would be surprising if Kedon Slovis suffered any kind of sophomore setback.

So it’ll once again be all on that offensive line. And for now, I’m going to wait and see how that plays out this spring, because there could be a lot of moving parts.