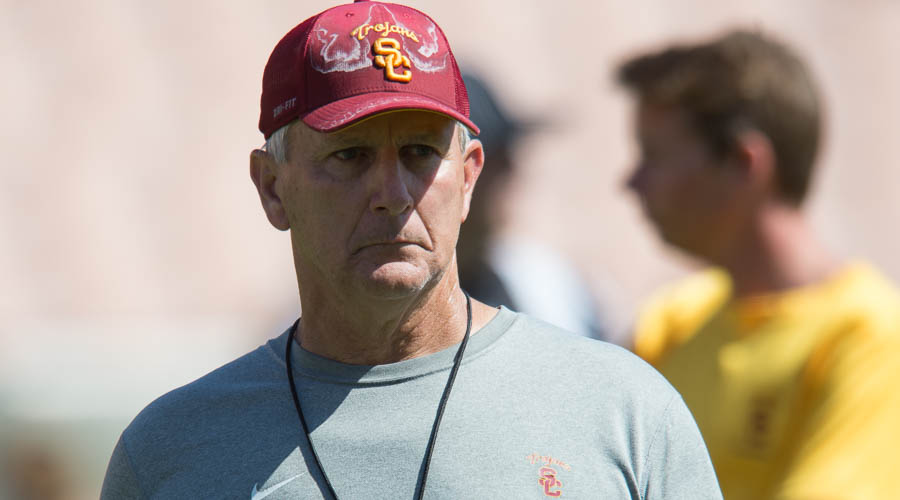 have you heard of 2 D-Lineman who are still on the market? They are Ratu Mafileo and Steve Tu’ikolovatu. What are our chances of landing one or both?

Ratu Mafileo is from College of San Mateo and he’s eligible to transfer to a 4-year school this fall with three years of eligibility remaining. He committed to Texas A&M a few days ago, and then there was a strange situation where he tweeted that USC offered, and then subsequently took that tweet down.

Tu’ikolovatu is a grad transfer from Utah who has been a back-up during his career with the Utes but did have four recovered fumbles last year. He visited Alabama yesterday and took a trip to Nebraska last weekend.

As of right now I wouldn’t call the chances good for either one heading to USC but either one, or both, would sure be welcome additions to the Trojans d-line depth.

My understanding is that Bama is a 14 point favorite. Pls correct as necessary. Isn’t that a pretty good compliment to them … or it some of it a down opinion of us? Is the standard +3 for home advantage in play here? There is no rematch in LA … true? Any thoughts on why not?

I think it’s a little bit of both, respect for Alabama and a sobering comment on the current state of the Trojans. It’s not too often that USC is a two-touchdown underdog and I would love to complain about it if those guys in Vegas weren’t so accurate with this stuff. The only way you change the perception is by getting it done on the field and hopefully this game provides a major step in that direction. As for the potential home-and-home, I never heard of this game being part of something like that, it was always planned as a one-off neutral site game to kickoff the season.

What action can the average alumni/fan take to show disapproval of the tower concept and support of almost anything else we have seen?

You can always try contacting someone in the athletic department to let them know your thoughts, although at this point it sounds like the plans are pretty far along, unfortunately.

Garry do you think it’s a mistake not going after Tate Martell?

I wouldn’t classify it as a mistake. Don’t get me wrong, Tate is very good and deserves to be mentioned among the best quarterbacks in the country. But since moving on from heavy pursuit of Martell last summer the Trojans have gone after Tua Tagovailoa and now Jack Sears, and they are proving to be pretty good too.

Hi Garry. If you could do a contrast and compare between Connolly and Callaway what stands out the most to you in their coaching styles for better or worse? I contend the O-line took a step backwards in their development under Connolly. What has Callaway done, if anything, to improve their development?

Attention to detail is what stands out to me about Callaway. Granted, we’ve only seen him for one spring but he was all about getting the fundamentals right in his first opportunity to work with the Trojan o-line. I loved the stat that coach Helton gave at the end of spring when he said they added up all the individual reps that the various position groups did during spring ball and the offensive line came out on top. That speaks in large part to the way Callaway focused on getting the details right in those drills and they worked on them until they got it right.

How significant is the loss of Austin Thomas back to LSU?

It shouldn’t be a huge deal provided Helton makes a good hire to take his place. Thomas was good at what he did but there are other qualified guys out there who can recruit kids to USC.

Garry, assuming you’re going to Arlington for Sept 3. What restaurant are you looking forward to visit or recommend Trojan fans to visit while staying in Dallas area.

Yes, I will be there. We haven’t gotten as far as picking restaurants yet although we will probably be having lunch at the team hotel (Gaylord Texan) on Friday for those who are interested. We will post more details as the game gets closer.