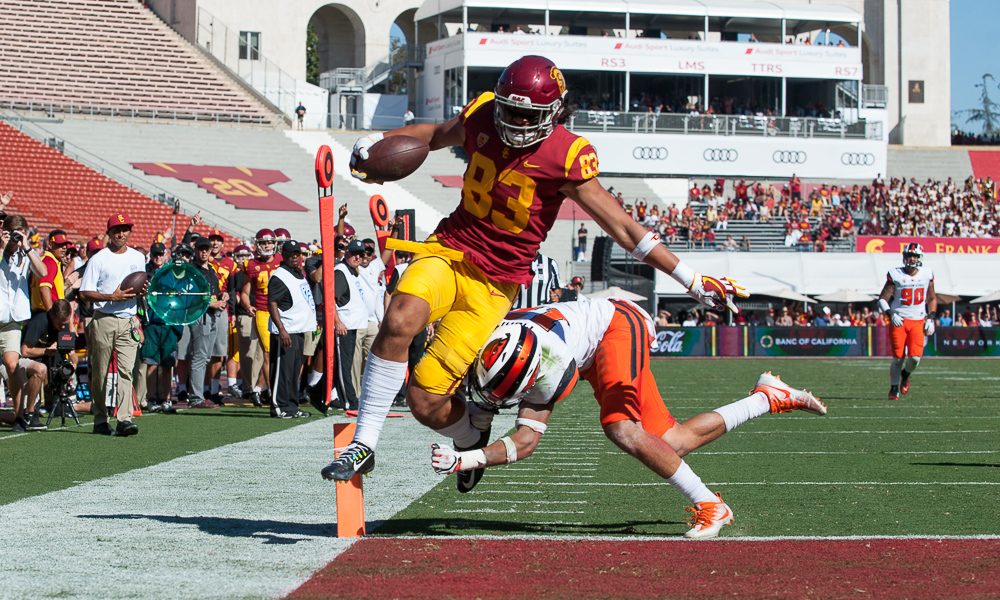 ectrojan
Who is USC targeting at the cornerback and safety spot outside of Chris Steele?

At corner, I would like to see things pick up with Mykael Wright from Valencia. Isaiah Rutherford and Max Williams are others in the mix. Erick Young from Texas will take a visit on June 22nd (which is the big visit weekend of the summer) but Texas A&M is the frontrunner right now. At safety, keep an eye on Noa Pola-Gates, another extended member of a family that has been good to USC football.I’m anxious to see who shines at the Rising Stars Camp on June 10th.

Touchdown for USC
Do you think the team will take more snap from center this Fall? Will the TE position have a bigger role i the offensive scheme? More misdirection plays?

Based on what we saw in spring I do think we will see more of the quarterback under center, more misdirection, more two back sets, etc. Of course, it was only spring so we don’t know what will happen in the games but it was encouraging to see those elements, and to hear Helton talk about the input of Tim Drevno in bringing them more into the offense. As for the use of the tight end, it didn’t happen as much as I would have hoped in spring, part of that was the absence of Daniel Imatorbhebhe and part of it was the limited role of Josh Falo (photo above). I thought this was going to be a breakout spring for Falo and I still think he’s going to be a real threat as a downfield option, we just didn’t see it a lot in spring.

SC_AH
Was the juror “nudged out” by Anthony Bruno so a verdict could be reached?

By the way, thank you again Garry and Lizelle! Having never served on a jury, I found your coverage to be incredibly insightful.

I don’t think so. I actually thought Bruno did a good job of guiding the jury through the facts but it was unfortunate that the one cause of action they had to rule on (defamation) was the hardest one for McNair’s side to prove. I thought Bruno made it as clear as he could in his Q&A with Lizelle that if the breach of contract and negligence claims had been left in, that those claims would likely have been a route for them to vote in favor of McNair and to get him some damages. It may not have been the $27 million that was sought but it would have been something and it would have been a way to point to a victory over the NCAA. There has been a lot of discussion post-trial about the decision to remove those claims, and the fact that Bruno brought it up to the judge (Why were those claims taken out?) and discussed it afterwards tells me a lot. Remember, he’s a transactions lawyer in his job so contracts are what he knows well, I don’t think he was a negative to Todd at all, he actually would have been a big help if those claims had been left in.

Thanks for the comments about the coverage, I thought Lizelle brought a unique perspective as a lawyer and as someone who had covered McNair and knew him from his time a member of the SC staff. Just wish things had turned out different in the outcome.

USC92
Will Solomon Tuliapupu be healthy for fall camp?

Haven’t heard an update lately but the timing will be close based on when he suffered the injury. We’ll get some kind of indication when the summer workouts start and we see if Solomon is out there or able to get any kind of work in.