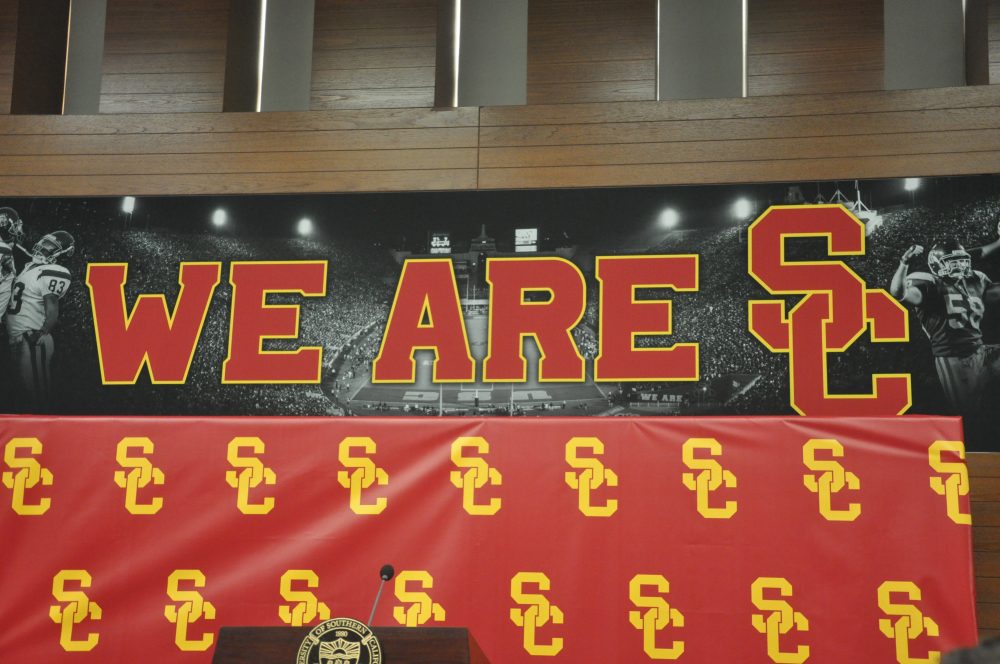 A blowout loss to Oregon, the announcement of a new athletic director and a road trip to Arizona State brought out a number of questions from readers in this week’s mailbag.

Q: Greg Katz in his review of Saturday’s game had remarked there was several recruits viewing the game. I wonder what if anything was said among them about how they felt about the game and of course the main subject of chances that Helton might be elsewhere next year. Has there been any discussions about any remarks that might have been voiced?

Sometimes you can spin a loss into “that’s why we need you here,” but not that kind of loss to that program with everything else that is going on with USC this season. USC recruiting is in a tailspin right now and I don’t think anything short of a Pac-12 title was going to pull it out. Any other result and recruits are still going to be hesitant about signing with Clay Helton’s USC simply because recruits shy away from uncertainty, and nothing is more uncertain than a coach recruiting while firmly planted on the hottest seat in college football.

Q: Similar to a President Elect who has not officially been sworn into office after winning the election and an outgoing lame duck President, do you see a scenario where Coach Helton is allowed to finish the season but the incoming Head Coach is known to the public and can conduct unofficial duties (like recruit)?

A: You are only allowed 11 official coaches on a staff, so USC wouldn’t be allowed to add an additional coach and have him recruit or handle any official team responsibilities. In your scenario, USC would have to drop one coach to allow another one to come on board.

Q: Since USC is in the dumps right now, would you mind reminiscing a little? What is your favorite all-time USC moment? Give us a feel-good moment, and a reason to smile. Fight On!

A: I’ve got one on the field and one off.

My grandpa graduated from USC in 1949 and he and my grandma attended their first USC game together at the 1948 Rose Bowl (their relationship went better than the game). They went to virtually every home game and an away game or two for more than 50 years, so growing up, I knew USC was a football team before I had any idea it was a university. My grandfather was diagnosed with cancer while I was in high school. My freshman year at USC, I got to tailgate with them every home game and ran into them leaving the Cal game. He passed away on November 27 of that year and our last game together was the 27-0 game against UCLA. I’d been to games with them before, but getting that year while I was on campus was special.

As for something that happened on the field, I don’t go as far back as a lot of posters, but I was at Notre Dame Stadium in 2005. We were sitting where 4-and-9 came straight toward us, and so did the Bush Push. That stadium was vibrating the entire night and that finish was incredible. We rode the train back to Chicago that night and I remember it feeling like it took about five seconds.

Q: I have some personnel questions. I know that Gaoteote was the “big name” and all, but, Mauga makes a lot of impact plays and is a tackling machine. Looking at how Helton seems to have favorite Trojans who play regardless of performance in recent times such as Lobendahn, Edoga, and, Houston and Rector of late, do you see Mauga playing the majority of the snaps going forward?

A: I think there will be a balance with Mauga and Gaoteote, but I think both have had their share of hits and misses this year. My guess is that if Gaoteote is healthy, he’ll slide back in as the starter, but I’d be a little surprised if Mauga doesn’t play a bit more than he was at the beginning of the year.

Q: Erik, the last couple of coaching searches when up and coming coaches are mentioned as candidates we hear the refrain- he doesn’t get USC, let him prove himself some where else, USC is not on the job training and we have not even considered guys like Matt Rhule at Baylor, Chris Klieman at Kansas State, Mario Cristobal at Oregon or PJ Fleck at Minnesota, all ranked ahead of USC at the moment.

What will it take to change this and who should be considered for head coach based on ability alone?

A: If a change is made at head coach, Urban Meyer is the one slam dunk option out there. If that doesn’t work out (for on-field reasons) nobody who hired him is going to have to explain what they were thinking. Of the guys you mentioned, Matt Rhule would be my choice. He’s a defensive-minded guy who has had to build two programs under tough circumstances. Forget X’s and O’s, I think it’s important to get a guy who understands building a program and everything that goes into creating a culture from the ground up. Rhule has done that. I wouldn’t mind the other three names you mentioned, but I think Rhule has a leg up on the rest.

I don’t mind an up-and-coming coach, but I do think there is validity to the thought process that they have to have done this before at this level (or above). From football coaches to athletic directors, we’ve seen the deficiencies when guys are learning on the job and don’t have a deep understanding of everything that comes with running a program (things to do, and just as importantly, things not to do).

Q: Erik, I hope this question gets answered before you publish the next Mailbag, but what do you think the chances are that Helton is fired this week and SC is coached by an interim coach at ASU? Do you think that is the way to go or do you think SC should wait until a new coached is announced before dismissing Helton?

A: Obviously we’d be cutting it close for something to happen between now and Saturday. It’s an interesting topic, and obviously rumors have floated that a poor showing this weekend could bring change. If a decision is made to move on, I don’t know how much value there is in making a change immediately, unless not doing so is prohibitive to your search. At this point, I’d be surprised if USC gets blown out in any of these three remaining games. But I also didn’t expect the season to take the sharp turn it did during that Oregon game. So as has been the case with everything USC related of late, a lot of options still seem to be on the table.

I know a majority of the outspoken fans are ready to see him gone, but I don’t get the sense that anybody at USC wants to dump him unceremoniously or embarrass him if relieving him of his duties is indeed a process that takes shape.

Q: Which was the most blatant example of poor coaching: kicking deep against Oregon seconds before halftime or starting the season with identical jersey numbers on the field?

A: Poor coaching is the identical jersey numbers. That’s a complete inattention to detail by the coaches (the players too, but mostly the coaches). I (and just about everybody else) disagreed with the decision to kick it deep in that situation against Oregon, but having two guys with the same number on the very first play of the season is pretty inexcusable.

Q: I know you can’t read a sentence about a looming SC coaching change without the phrase “Urban Meyer,” but the tea leaves from various national writers with connections to heritage hall seem to indicate that they won’t pursue Meyer. What’s your take from talking to people around the program?

A: The whole Urban Meyer situation has been an interesting one, because we’ve heard whispers on both sides that he’s definitely coming and that he’s definitely not an option. As always, I believe it’s a mix of both (obviously, he can’t both come and not come) in the sense it seems there have been maybe some changing opinions.

Q: The RB position continues to suffer what with Dominic Davis now on concussion protocol (not that he was going to get a bunch of carries, but he was a resource to use). Certainly this position has taken a beating (why that is the case is a question for another day). The question for now is whether USC can recruit a reasonably good RB or two in the next class, and if so, who looks probable?

A: USC recently offered a couple of Cal running back commits in Chris Street (San Juan Capistrano, Calif./JSerra) and Casey Filkins (Lake Oswego, Ore./Lake Oswego). It’s obviously getting late in the process to really get back into things with elite prospects, but if a change is made and a new coach ignites recruiting, Texas commit Bijan Robinson (Tucson, Ariz./Salpointe Catholic) and Georgia commit Kendall Milton (Clovis, Calif./Buchanan) will be right at the top of the list.

Q: Erik: Have any USC athletic department folks spoken about Coach Orgeron LSU Tigers ranked #1 or that John Robinson is now one of his advisors after getting the boot from USC?

A: I’m just going to leave this here without comment.

Okay, one small comment: I don’t think anybody associated with USC hasn’t noticed what Orgeron is doing at LSU, or that Robinson now is a part of it.

Q: Have you ever seen Slovis on the phone with Harrell during the game? I can’t recall seeing this and it seems to be another thing most teams do that we don’t.

A: I haven’t seen it first hand because I haven’t looked for it, but I’d be surprised if they didn’t talk during the game. Harrell mentioned on Tuesday that he told Slovis right after the first touchdown throw to Drake London that it was a risky play and he should never turn around to roll back to his right after he’s already rolled to his left. The way he relayed the story made it sound like the two spoke right after the throw.

Q: Hi Erik, Assuming Helton is going to be replaced regardless of the outcome of the remaining games, how do you think hiring a coach like Urban Meyer will change the plans for some of the top local recruits currently committed to other schools? Bryce Young etc etc…

A: IF, IF it’s Urban Meyer, my thought is that he could get just about any recruit in California, Oregon, Arizona, Washington and Nevada to schedule a visit within a matter of ours. I don’t think it would be as simple as just signing 25 5-star guys, because those recruits have solid and established relationships with the schools and coaches they are committed to, and many could be communicating with Meyer for the first time. But I have no doubt he would land a very, very good class.