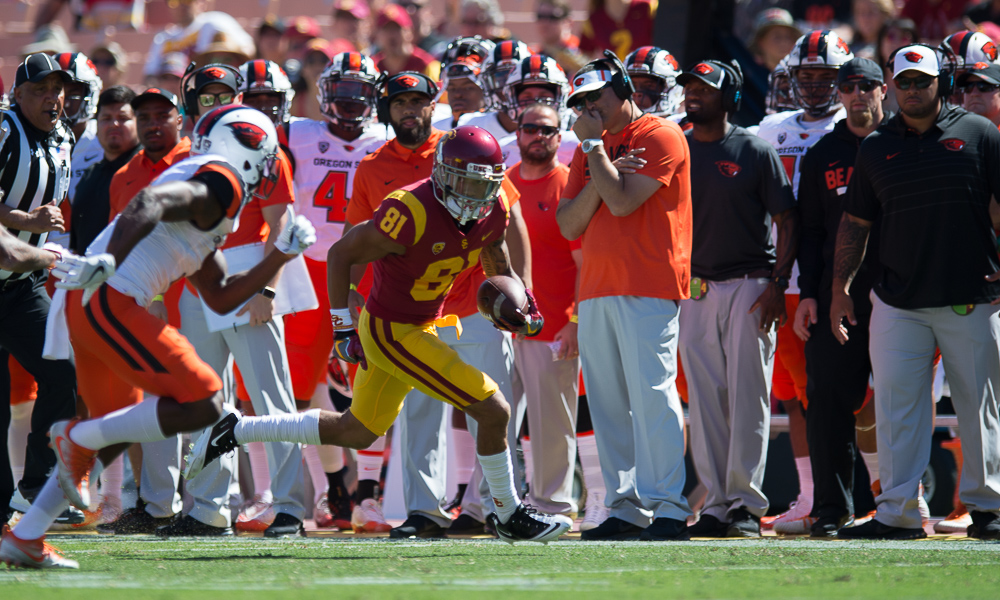 From what I understand, we are currently at 85 scholarships for next year including current players and commits. If you had to project right now to the best of your ability, which recruits not currently committed do we add to this class and who do they replace that’s currently here?

I think there will be somewhere around four more verbals but we don’t know yet whose spots they would be taking on the current roster. There have been rumors of guys like Roy Hemsley or Jamel Cook who could be potential transfers but nothing has been confirmed. There could also be spots that don’t open up until the end of spring so we wouldn’t hear any news anytime soon on those. We’ve seen Clay Helton manage numbers on signing day very well the past two years, no reason to think this year would be any different. If I have to project four names who will sign who are not currently committed, I’ll go Solomon Tuliaupupu, Olaijah Griffin, Julius Irvin and Devon Williams. I really want to put Penei Sewell on this list but it’s very close to call with Bama and Oregon still in the mix.

Fourthseed
What are the chances Kennedy Polamalu is looked at for our running back’s coach?

He was reached out to and a conversation was had but, unless something changes, KP won’t be coming back on this one.

SC200SC
As mentioned in one thread, today’s CFB world is dominated by social media, fan sites, and instant media. There obviously has been an inordinate amount of criticism aimed at Clay Helton, some of which (IMHO) is unreasonable. To your knowledge has this been impacting the USC players and/or recruits in any way? Thank you.

For the vast majority of cases it doesn’t really have any impact. The players and recruits today have grown up in a social media world and they have a pretty good understanding of it. One instance that I do think had an impact was when Michael Pittman’s dad put out tweets about the fact that his son wasn’t getting the ball. As it turned out, Michael was just coming back from a high ankle sprain around that time and as he got healthy he got more balls thrown his way and he finished the season strong. Is there a perception that the dad’s tweets might have impacted him getting the ball more? Sure. It was something Clay Helton and Michael Pittman had to address with the media, but I still don’t think it played as much of a role as Michael simply getting healthy.

gubo&palanka
What do you think will happen with the 5 kickers on scholarship?

I think we see someone leave by the fall, perhaps Chris Tilbey graduates and moves on, maybe Michael Brown looks at a medical redshirt, etc.

LDIABootney
Do you think the staff will bring in a blueshirt or 2 this class or wait because the 2019 class is supposed to be really strong out west?

I wouldn’t rule out any blueshirts if they can fit under the 85 man roster limit in fall.

SC93er
Can’t wait for Spring practice. As you look at the team now, name one player on O and one on D that you see as becoming impact players in 2018 who (whether due to injury or inexperience) weren’t really major contributors last year. I’m thinking Daniel I. will come back from injury and build on what he did in 2016, and on the other side, I look at Levi Jones as having the potential to make a major jump.

You’ve picked a couple pretty good ones. Daniel could make such a difference if he is able to return as the weapon that he was in 2016. After that I’ll go with Austin Jackson since he’s the projected starter at left tackle. He got some nice playing time to get his feet wet last year and now he steps into an all-important role. Levi is someone I’m really looking forward to seeing in spring and I could see him getting looks both inside and outside at linebacker to see where he might fit best. I’m going to also add to nose tackle duo of Brandon Pili and Marlon Tuipulotu, and I’m anxious to see if Jordan Iosefa can make a run at filling the OLB spot vacated by Uchenna Nwosu. Of course, another obvious answer is whoever wins the QB job.

SCeeV03
What are the chances SC hires McNair after he beats down the NCAA?
On a more serious note:
Your take on the Impact of Coach Keary’s presence on the sideline this season. Will BKU join him on the sideline (assuming he stays)?

Count me as a fan of Colbert’s hire and his calming presence will be one of the reasons why. Keary was always known as a well-prepared player and I’m sure his position group will be the same way.

No official visits last weekend but this weekend is expected to host a trio of verbals in WR Amon-Ra St. Brown, LB Palaie Gaoteote and QB JT Daniels. That’s about as good as it gets right there. I would have liked to see Solomon Tuliaupupu on the trip as well but he will come in the following weekend, which means the Trojans will have the last shot to make an impression before signing day.

As an FYI, the Trojans did host some of the top class of 2019 prospects on campus last Saturday with names like Kayvon Thibodeaux, Chris Steele, Jonah Tauanu’u and Jeremiah Criddell, and there were a pair of running back offers to Jordan Wilmore and Sean Dollars.

SC Forever
I am hoping we sign at least 3 OL players but if Penei Sewell does not commit to USC, is there any other players that our coaches are recruiting? Any current USC player who could try from DL to OL position?

There aren’t any other known targets on the OL besides Sewell, and I share your concern about needing 3 OL in this class. Nobody on the current DL jumps out to me as an obvious candidate to try on the OL.

redeye
Saw the Coli renovation picture on WEARESC.com, never realized the seats were on dirt berms. Now that they are in the dirt, are they planning to lower the playing field level to improve the site lines for folks down in the lower rows?

I haven’t heard of any plans to lower the field.

motovich
Who are your 3 to 4 surprise breakout players in spring camp?

I will put Matt Fink on the list, I don’t think Helton will name a starter coming out of spring but Matt will put himself in a solid position. With no Deontay Burnett, look for Trevon Sidney (photo above) to play well in the slot. Someone is going to rise up in the Nwosu role, and I can see it being either Jordan Iosefa or my sleeper pick of Levi Jones. Look for Bubba Bolden to take the lead for Chris Hawkins spot.

crank31
What’s the status with Dominic Davis for next year? I like him as a punt/kick returner option with our suboptimal performance at that position last season.

Right now Dominic will be in the mix as a reserve corner. He might get a look at a return role but he’s tried it at various points in his practice career and it’s never really gone anywhere, despite his obvious speed.