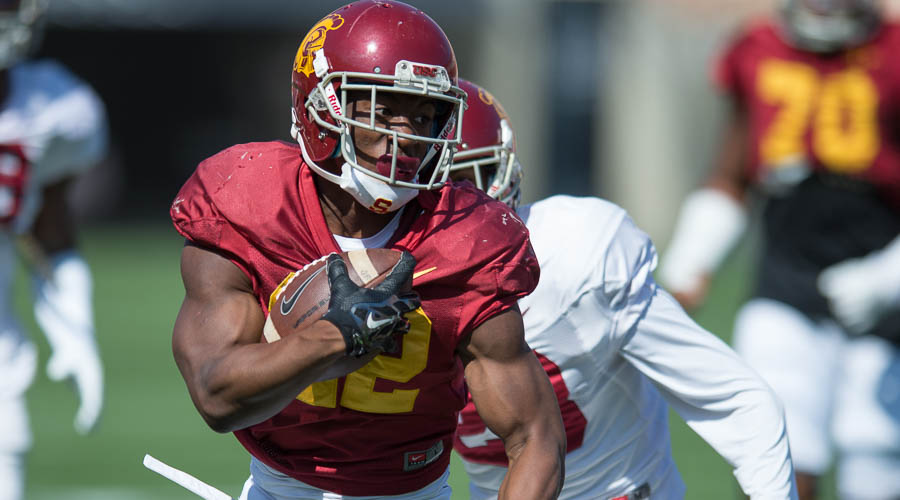 In this week’s mailbag we talk about the quarterback competition, look ahead to some key match-ups in the Alabama game and discuss the most pleasant surprises of spring.

Garry, we all know Clancy’s defense can get after a quarterback in passing situations, but how have they looked against the run game? Everyone talks about going up against Bama and Stanford this year, but we’ve got a big, experienced O-line and two talented running backs ourselves they go up against every day, just wondering how they’re holding up.

That’s a correct read on the strength of the defense being in the pass rush right now. Helton addressed the run defense after practice on Thursday and he said it’s going to rely on two things. The first is the defensive line being able to get penetration to play on the opponent side of the line of scrimmage, and he said that has been a major point of emphasis from Kenechi Udeze to his players. Secondly, he said the linebackers and even the safeties are going to have to come up and make plays. You figure this is an area where Cam Smith will certainly improve things in the fall, and I like what I see from a guy like Marvell Tell in terms of the type of hitter he is.

Hey Garry, how has it been covering this spring practice compared to others? Why has Helton allowed a lil more access to the media compared to Sark/Kiffin? Thanks Garry!

I don’t know that Helton is allowing more media access than Sark did, or even Kiffin at the beginning, but there are ways he is doing things different. The first thing you notice with the way he deals with the media is that he is as open as you could hope a coach would be. That’s pretty consistent with everything we’ve seen from Helton as a person as far as being straightforward and genuine. There are also practical differences in his practices such as no music, all practices being open and in the afternoon, etc. that are different from the way his predecessors did things.

Is there the sense that Thomas Graham was influenced by his 7on7 coaches somewhat, with his decommitment?

Yes, he has referenced talks with his parents and coaches in reaching the decision to de-commit, and his 7-on-7 coaches do play an active role in the recruiting process for their players (which includes Graham and running back Stephen Carr). It will be real interesting to see what happens with these two because they were both considered pretty darn solid in their early commitments last year.

Thanks for the insight on some of the changes we’ve seen in the offense, which support the Heltons’ claim that we’re going back to some familiar formations, including use of a true fullback. You’ve covered how Reuben Peters has been pressed into service from linebacker to fullback. How complete picture do we have of others stepping into the fullback role; even if its more of the Rhett Ellison example? …and to extend the reasoning a little bit, are there any viable candidates in the 2017 recruiting class who are suited for and might be seeking a role as fullback? Thanks!

We haven’t seen as much of a look at others fullback/h-back options as I would have thought. So far it’s been mostly Peters in that role, which is fine if he is filling that need, but there was certainly an anticipation of someone like Daniel Imatorbhebhe or Taylor McNamara taking on a Rhett Ellison-type role (it was even referenced in the spring media guide) but not so much to this point.

Please tell us about the top 4-5 most pleasant surprises of the Spring so far. Thanks Garry!

Uchenna Nwosu is probably the first name worthy of mention for this list. He’s been pretty consistent as a starter at OLB and I would be fine heading into the season with him in that role. Sam Darnold. You figured Max Browne would be the steady veteran but it was unclear how much Sam would push him, he has pushed him a lot. Unless something dramatic happens in the next week, I don’t think a QB starter is named at the end of spring. Ajene Harris. He was consistently productive at slot receiver after returning from an injury but now we’ve seen him flip to defense where he could provide much needed depth at corner. Jordan Simmons seems to be taking advantage of the opportunity he’s been given this spring, primarily in the mix at RG but lately showing that he can play at RT if needed as well. I’ll give a 5th pleasant surprise from a guy who played a lot last year but has really risen his game this spring, Iman Marshall. He’s playing with a lot of confidence and it shows on the field.

How about a wearesc.com Beer and Tex-Mex reception, September in Arlington???

Sounds good to me.

Can A. Harris get serious playing time on defense? Do you see A. Harris as a 2-way player like A. Jackson, or is he just temporarily on defense because the usual starters aren’t there or are injured?

I think he can see legitimate time on defense, and I wouldn’t rule out a dual-role similar to Adoree’, that tells you how much I think of Ajene as a “football player”. He was a City POY as a QB, has always produced in practice as a receiver when healthy, and I have no problem thinking he can make the transition to corner if the coaches stick with that. He doesn’t have the “wow” factor that someone like Adoree’ has but he simply knows how to play the game.

Garry, I know it’s way too early for this question, but here it is anyway…
Given that Alabama loses it’s starting QB, top couple RBs, center and, I believe, at least one other O-lineman, a couple of starting D-linemen (and some key backups), at least one LB, has a new DC, and so on… what do you think will be the match ups that favor the Trojans, and where do you think we have the most ground to make up?

As a follow up, for the single game, would you rather see a guy like Max Browne, who is more familiar with the offense although he doesn’t have much actual PT at the college level, or a guy like Sam Darnold who adds that mobility factor, start that opener against Bama?

I think the match-up that most favors the Trojans is the USC offense, particularly the run game, against the Tide defense. There is a whole lot of returning experience for the Trojans in the key areas of running the football and, as you reference, there will be some new players in the front 7 for Alabama, and a new coordinator. I certainly don’t expect the Tide to fall much from their standard but you never know what can happen in an opening game with so many new pieces. As far as the most ground to make up, I’m also figuring Alabama will come in ready to run the ball themselves, and run defense is the area the Trojan defense needs to improve the most.

In that environment, I would favor going with the veteran Browne. But I’m open to seeing where the QB battle goes in fall camp.

Reading Johnny and your practice reports, particularly Thursday (today’s) report, it sounds like the defense is starting to get a ton of sacks.

Is the defense getting that good? Is it a schematic thing, and the offense can’t figure it out? Is the O-line struggling against faster athletes? Are running backs failing to read and react? What’s your take on it GP?

I will say a schematic thing as much as anything. We saw the Clancy Pendergast defense work in 2013 to get pressure on the quarterback and it’s been a point of emphasis so far. Even Clay Helton said after a team drill that focused on applying different pressures that he wasn’t always sure of which direction Clancy was going to bring it from. It’s going to be nice to see the USC defense in that kind of aggressive mode again.

How is Coach Callaway improving the O-Line’s discipline against costly false starts?

There is a lot of attention to detail. If Callaway doesn’t like the way something was done in a rep, he coaches the players on what he didn’t like and they do it again. The only example of a scrimmage situation we had was a couple weeks ago in the Coliseum and Helton came away being pleased with how clean the offense was that day, including the o-line.

SCLarry
Whether it was warranted or not, we all know that Jalen Greene has no shot at unseating either of the top 2 QB contenders…never had. But beyond that…
How involved in the offense will he be allowed?…or will he continue to be under-utilized? (At least in my HO)
Or, do you believe that I am perhaps overestimating his abilities? —No offense taken, I am just an ‘older than dirt’ fan.

I would agree that it was a real longshot to think Jalen was going to move past Browne or Darnold this spring, so that kind of begs the question “why move him?” and I would like to think the coaches did it with a specific role in mind. The Helton brothers and Tee Martin are talking about using creative ways to get mis-matches, and the presence of Jalen could certainly help do that in certain occasions. I’m going to take a wait-and-see approach on this one and hope that Jalen is able to play a bigger role.

How promising does a three headed backfield look with Davis, JonesII, and Ware? Will the two-back formation and promise of greater physicality run through Ware’s wheelhouse?

Any physical tone that needs to be set in the backfield will come through the wheelhouse of Justin Davis (photo above). Ware will take over that role next year when Davis is gone but, for now, Justin is very comfortable in that spot. I see it being a 1-2 rotation this year with Ware being the 3rd option, but I don’t expect Aca’Cedric to get the number of touches that Davis and Jones get.

Do you think Toa slides in at LT to back up/share time with Wheeler once he is back with Falah/Rogers at C.

No, I think a healthy Toa is the starting center.