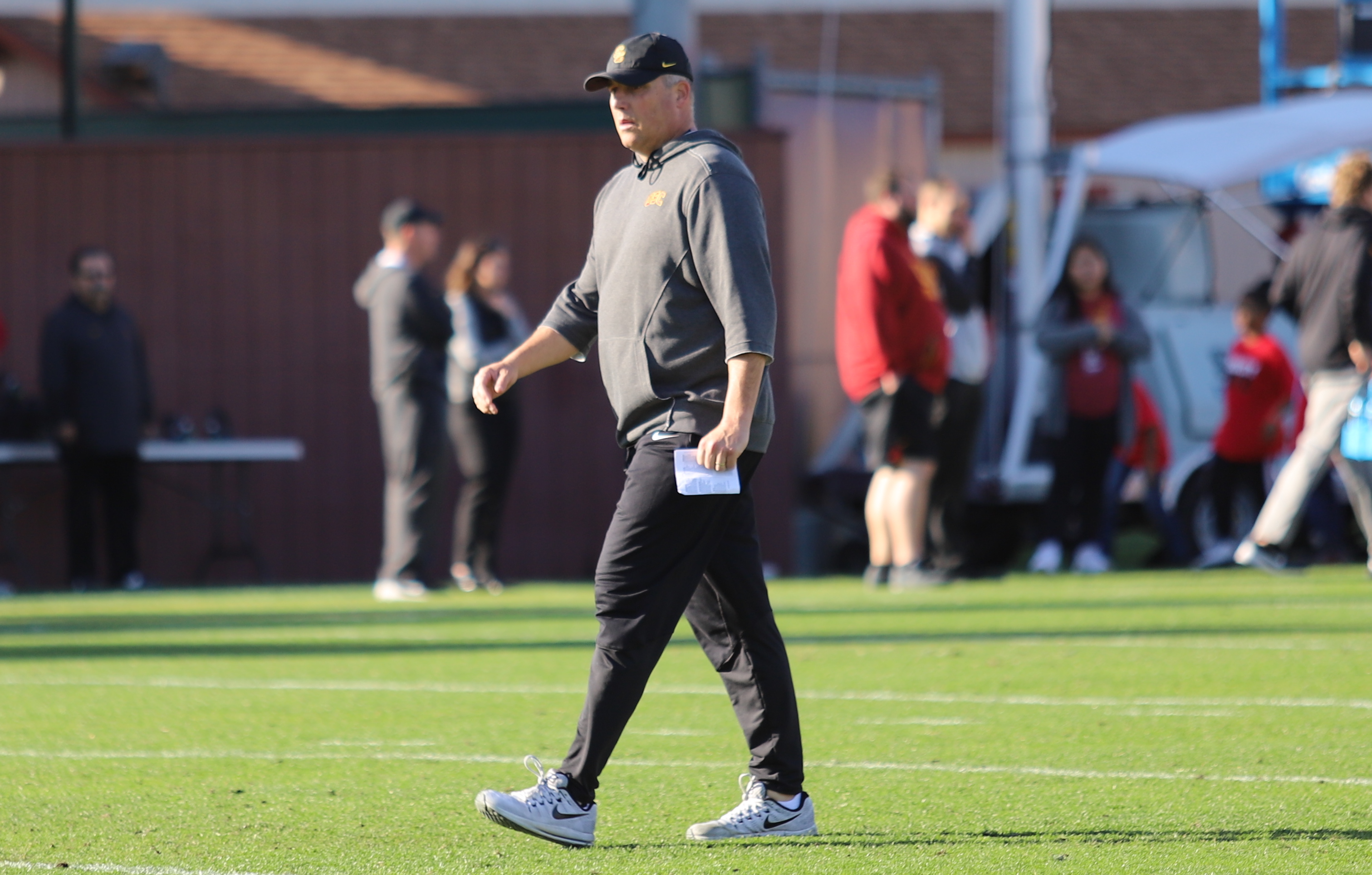 This week, the mailbag features questions about the athletic department, 2019 enrollees, the tight end alignments, and the Fall Showcase.

Q: Do you see any repercussions in the athletic program from all the problems outlined by Greg Katz in his latest article?

A: This is a question with a few levels to it, because you can look at repercussions potentially coming from three different places. There could be repercussions coming internally, handed down from USC administration, as well as potential repercussions from the FBI probe as well as if the NCAA gets involved. I think it’s almost a guarantee that new USC president Carol L. Folt will look to put her stamp on the athletics program, which will mean eventual changes for some, or perhaps many, involved there. At this point, it wouldn’t surprise me that much if the FBI investigation into the college admissions scandal resulted in more change in the program as well. I would be surprised at this point if the NCAA got involved anytime soon, though certainly they are aware of and monitoring both the scandal and the recently filed lawsuit.

Q: Is Tilini Livai still scheduled to enroll at USC?
Did not see his name on players enrolled.

A: There’s a lot of smoke that points to Livai not ending up in this class for USC. He and Texas safety Dorian Hewett are the two signees from the 2019 class not accounted for yet, after junior college defensive back Jaylen Watson announced late last week that he wouldn’t be enrolling at USC this fall.

Q: If as expected, we lose another player to Academics does that open up another scholarship? If so, then do you see SC grabbing another player from the portal?

A: It would open up another spot, and I think the portal makes sense, but you just don’t know what kind of players are left in there at this time of the year. For a staff that has to win now, it makes more sense to grab a one-year grad transfer than to hold onto the scholarship. Even though the 2020 class will be smaller and you could add another spot to it, it might even make sense to use it on a non-grad-transfer player if you think he can help in the future and specifically on the scout team this fall.

Q: When will media coverage start on the football program? Can we expect to have footage from the practices at any point in the fall?

A: We can talk to certain players following PRPs in July, and fall camp will open in August. We haven’t heard any specific changes to media rules for the fall, so likely we will be allowed to film the first 15 minutes of practice, which usually includes warmups and stretching.

Q: The new oline sets are going to be fun to watch and reading your post about the tight ends I am wondering how tight ends will set? Same as guard tackle? same alignment keys? The NFL uses the center’s butt to set alignment for all linemen but in college the set is in relationship to the the nearest other lineman to you thus creating the oline arc and making it even more pronounced with two on the line tight ends.

So do you think that two tight end are going to set using the same width of gap and back stepping alignment as the rest of the line?

A: North Texas didn’t set in that exaggerated umbrella look, where the guard is pulled back from the line and then the tackle is pulled back even farther. A lot of times it looks like the guard/tackle are the same distance off the line, and some cases where the tackle looks closer to the line of scrimmage than the guard. The tight end would set in a variety of ways, and I wasn’t able to find any examples of two tight ends, with one on each side of the tackles, making a seven-man offensive line look. Most often the tight end would line up off the tackle, but well off the line to make sure he wasn’t covered up by a wide receiver on that side. Here are a few looks.

Q: Do you expect the August 17 event to be a Cardinal vs Gold game, or something else?

A: I expect it to be a scrimmage practice, just like the scrimmage practices we’ve seen in the past. I would be shocked if Clay Helton spent a practice that deep into fall camp doing something completely new for him and the team. I think you’ll probably get a little live tackling, some ones-vs-ones, and some situational stuff. But like I said, I’d be stunned if it’s a true scrimmage where they split up into two teams and treat it like a real game. There’s just no precedent for him running a practice like that.

Q: Do you believe that Folt will encourage Swann to terminate [Helton] if he has a losing record after the first six games? Does she possess the toughness, gumption, and insouciance to make that happen if need be?

A: I think Carol Folt knows exactly what kind of situation she’s stepping into at USC, academic, athletic, and otherwise, and she wouldn’t have taken the job if she wasn’t up for making the tough decisions that are sure to come her way. I’m intrigued to see how her relationship with Swann will go, but if things go very poorly, I don’t think Helton or Swann will last the season, and I think Folt would be very comfortable making an athletic director hire. I have to imagine that Swann’s lack of experience as an athletic director won’t give him much leeway to call his own shots under Folt.

Q: Are there going to be any takers for Ykili Ross in the transfer portal? If not does he have a chance to come back?

A: I haven’t heard of any movement for Ross out of the transfer portal, and I’d be really surprised if he was allowed back on the USC roster.