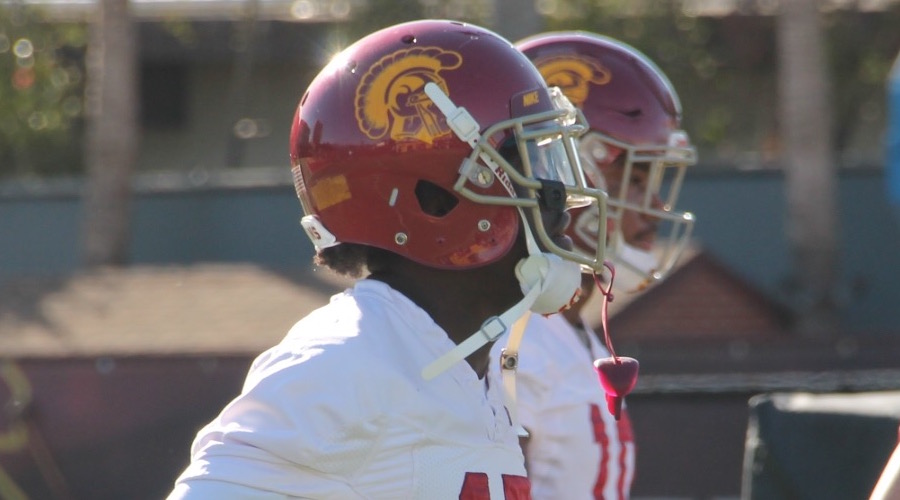 In this week’s edition of the mailbag we talk Velus Jones early impact, a potential new role for Jamel Cook and depth along the interior of the d-line:

It’s one thing when a guy who is solid on D gets a look on offensive because he is so talented (see Adoree). There are other times where a guy isn’t good enough to start at his initial chosen position, so he changes positions (see J Greene). Pie Young hasn’t established himself on defense. Yet he is getting a look on offense. It’s not like the WR/Slot is a position of need. So I have to ask, is Pie Young in search of a position?

I do think Pie (photo above) fits more on offense just based on the limited time we’ve seen him on the field. He hasn’t made much of a mark at corner, not that he couldn’t in the future but I don’t think you’re missing much on defense this spring to take a look at him on offense. Helton talked about his natural route running and ball skills after one day on offense, and I agree with those thoughts.

It seems that in four practices to date that Sam Darnold has already thrown as many interceptions as he did all of last spring and fall. Any explanation? Is he pushing the envelope to see what he can get away with? Is the defense that much better? Anything else?

I don’t sense any pattern with a few interceptions in the early going. I thought the pick-6 by Iman Marshall on the first day in pads was a nice play by Biggie as a veteran corner. Other than that, it just seems like the regular flow of practices where interceptions happen from time to time, including on fluky plays. If we’re still sitting here at the end of spring wondering about excessive interceptions then it might be a cause for concern but it doesn’t feel that way yet.

It was great to hear that Jamel Cook had such a fantastic day on Tuesday. Su’a Cravens was one of our most versatile players in recent years. He could line up at outside linebacker, safety, nickel . . . and wreak havoc from anywhere, whether he was up on the LOS or 10 yards deep in the defensive backfield. From your perspective, does Jamel bring us the kind of flexibility and versatility that Su’a offered? Will Pendergast utilize him in a similar role?

I can understand the point you’re trying to make with the versatility element of Su’a and Jamel but this is pretty new to see Jamel in the nickel spot so we don’t really know for sure how it will go. So far it looks pretty good with 3 picks in one drill. To hear Helton talk about the reasons for the look (the fact that Jamel showed such good 1-on-1 coverage skills in bowl workouts, plus his abilities to rush the passer and stop the run) are very encouraging when you consider his 6-4 frame and hitting ability, I’m really looking forward to seeing where this goes with Clancy finding a role for Jamel.

Liam Jimmons, Christian Rector, Jacob Daniels…..these guys primarily represent depth on the DL if I’m not mistaken. How do you feel about this group? Who stands out? Who needs to step up and in what way?

I feel OK and I hope to feel better as Marlon Tuipulotu continues to assert himself and especially when Kenny Bigelow returns. If you add those two to the depth mix it would really change things in a good way. The three you mention do offer the ability to contribute though. I would put Rector as the most ready to contribute and then Daniel, although I’m still waiting for Jacob to take it to another level as I think he has that ability. Jimmons will be interesting to watch as he has really bulked up to interior lineman size, now it’s a matter of turning that into production. Liam is still young so he has a long way to go in his career.

With the speed being displayed by velus jones, could he potentially be the full time version of how adoree was used on offense? Or is he a different type of player (perhaps not as dynamic) and be used more like a deontay/ajene slot receiver?

Yes, I do think Jones could be used in a similar role to how Adoree’ was used on offense by getting him the ball in the slot, out of the backfield, etc. Velus has jumped out so far with his speed through the early sessions of spring, he has to be considered one of the pleasant surprises so far.