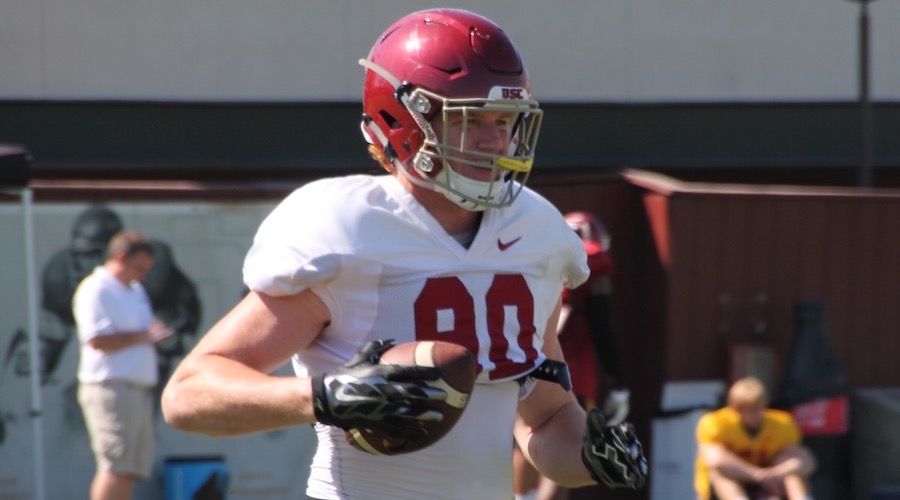 In this week’s edition of the mailbag we discuss Adoree’ Jackson’s 40-time at the Combine, which games are worrisome on the 2017 schedule, how many linebackers will the Trojans take this year and some spring ball OL.

Any new information regarding Fehoko or Asiasi?

Nothing new on either guy. There were some recent rumors about Asiasi to UCLA but I would love to add him even if there isn’t a clear need at either spot he can play (TE or DL). He’s just that good of a player that you bring him in and worry about where to play him later. With Fehoko, I like the fact that he has shown production on the college level, but it’s also important to remember that USC didn’t offer out of high school and are fresh off a huge DL haul in the latest class.

I don’t see it happening. I think if he gets anything with a 4.3 as the first two numbers he will be happy.

Garry, looking over next season’s schedule which game or games worries you the most?

Stanford in week 2, until proven otherwise, is a big one. It will be nice to get them in the Coliseum and the Trojans will be looking to make a statement. That road trip to Pullman on a Friday night is just strange enough to be worrisome, especially with Mike Leach and Luke Falk waiting. And of course, any visit to South Bend has my attention.

Sears vs Fink, who is the #2 QB in 2017? What are the odds of Jalen Greene having to sacrifice his WR role (or at least a good chunk of it) to be the #2 guy if one of these two don’t give the coaching staff enough confidence to be Sam’s backup?

I’m not going to make any predictions without seeing them on the field first but let’s just say I’m not betting against Sears right now. I think Jack is very capable of being the back-up, mentally and physically. But I also want to see where Matt Fink is at, his skills fit the style of this offense. I’m hopeful that Jalen will be allowed to go back to receiver full-time but as you say, there is always the chance neither of the other guys are ready and they have to keep Jalen at QB. I would put those odds as slim though.

Garry — What impact does Connor Murphy make this year and at what position? What did he excel at last year and what does he need to work on this spring?

I’m anxious to see what kind of move Connor (photo above) can make for more playing time, Oluwole Betiku as well. Both of them played the OLB position where Porter Gustin starts so it wouldn’t be a surprise to see one of them move over behind Uchenna Nwosu. I’m also figuring that Connor is going to see some good growth in his first full off-season with the strength and conditioning program, he’s already a big guy and that should only be more of an advantage moving forward.

Under normal circumstances I would say four but this year it wouldn’t surprise me at all if they take five because there is such a stockpile of talent at the position. The Trojans already have commitments from three of the top players on the board, and with guys like Solomon Tuialupupu, Merlin Robertson and Adrian Jackson still out there as strong possibilities for USC, I would definitely look to adjust the numbers and take an additional body or two while the talent is there.

Who gets first trial at RT? I assume Chuma at LT

Yes, we’re hearing Chuma at LT, so that means it could be any one of several players at right tackle. Clayton Johnston and Roy Hemsley are certainly two candidates, as is Chris Brown, depending on what you want to do at left guard. And if E.J. Price were to be available you have to imagine he would be in that mix somewhere.

Roy Hemsley and Clayton Johnson were both three stars coming out of high school. Are both of them in the conversation, now, because they’ve improved that much, or because there isn’t anyone else? Losing E.J. Price, Nathan Smith, and Toa at the same time that Banner and Wheeler are graduating, is a heck of a burden. Can you give a rundown of who’s left in the tackle cupboard, and their relative current abilities? We really haven’t heard much about how they’re all progressing. In addition to Hemsley and Johnson, that would be Frank Martin (is he a guard now?), Jordan Austin, and… who? Andrew Vorhees? Would Nico Falah be a candidate, and, if so, who would play center in his place?

We addressed some of this in the previous question but there are a few more details in your question. I wouldn’t say this is a case of someone like Johnston or Hemsley rising up to be a primary candidate, it’s more of a case of a great opportunity for guys like that to impress the coaches with those other guys out. I would still imagine Toa is back in fall (and the above mentioned possibility of Price) so now is their chance to show what they can do. To be honest, I don’t know if either guy (or someone like Jordan Austin) is ready but we’re about to find out. As an FYI, Frank Martin is at guard and that’s where Andrew Vorhees projects as well. Nico is an interesting thought if needed because you do have Cole Smith behind him, and Cole has been in the system for two years now.

Would it be a surprise to see EJ Price out there for spring ball or is the rumor just that…a rumor?

I don’t think it would be a huge surprise if he is out there. The fact that he in enrolled in school for the spring semester makes it more than a rumor to me, for two reasons. One is that he was taken off the roster in September, although we don’t know know officially if he was taken off scholarship, or how his eligibility was handled. Second, the fact he is back for the spring semester, it’s not a continuation of the fall semester when he was here before, he had to enroll again for spring, and that begs the question if he is on scholarship or not. It’s hard to imagine he would be here this semester if not on scholarship, but we just don’t know for sure.

Cameron Smith was not the same this last year and we all assume it was the result of the knee injury the year before. I am really interested in you and your staff and fans reporting on him from practices next week. Are you optimistic?

It says something about how good Cameron is that he led the team in tackles (15 ahead of the next highest total) and it was deemed that he wasn’t the same due to rehab from his injury. And I would agree with the assessment. I think his speed was where we saw it the most as he struggled in that area at times. He was certainly never the quickest backer as a freshman but it was notable with how limited he was last year. How much of that is due to the knee rehab? I’m hopeful. I also think it will help him overall just to get the knee some rest, he came back early in order to be ready for fall camp and he started all 13 games. I’d be shocked if he isn’t a team captain this year.

No idea on his status or details of his conduct violation. We were told that the spring prospectus will be posted on the 6th, so at the very least we will have an update then on whether or not Matt is on the spring roster, and Helton will certainly be asked for an update after practice on the 7th.