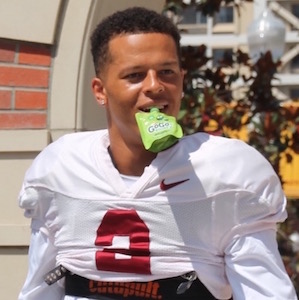 Grumpyoso
Is there any rumors or ideas on who might be the running back coach?

There has been a pretty tight lid on any information coming out about the running back coach position. We had heard in January that Kennedy Polamalu was approached but there were no extended talks, and there has also been the rumblings that Johnny Nansen could flip over from OLB’s to coach RB’s, something he has done before at SC. Whoever it is, we will find out next week at the latest.

Jcanderson69
At the Coli groundbreaking ceremony, Lynn eluded to this not being the last of the coli renovations, just the start. Have you heard rumors of what could be in the future and when?? a couple rumors I heard from prominent boosters is a second tower or tier on the opposite side, a standing room plaza area like Jerry’s world. can you comment on if the current coli redo is going to give the players updated locker room area etc?

We had originally heard that updated locker rooms would be part of the renovation but I don’t see anything on the Coliseum Renovation website that mentions it. Perhaps that is a phase 2 item because the locker rooms definitely need to be updated. As for other big ticket renovations, it wouldn’t surprise me at all to see a row of suites someday on the north side, opposite the tower. The main reason is that the Tower suites have sold well so there will obviously be interest from the athletic department in building more suites. I would still like to see statues in the peristyle plaza area of former SC greats.

J4SC75
Garry, any clarification on the location of the “herniated disc” for Carr? As Sam Bam mentioned in the thread addressing Carr’s injury, the location from neck to sacrum makes a difference as to how it may be managed and the likelihood it will be a recurrent problem.

No details like that have come out so far. I’m sure Helton will be asked about it next week, we’ll see how much info he gives. Hoping for the best for Stephen and really wanted to see him out there this spring after missing so much time last fall with the foot injury.

in2nation
Hi Garry, thanks for all the great coverage! Could you please recap/expound on the coaching staff status? Is Keary Colbert the 10th coach? And is the only position left open the RB position? Do you expect that with the addition of Lenny Vandermade, we are seeing CCH’s staffing philosophy swinging in the direction of other power 5 programs with extensive offensive/defensive staff? (non-coaching positions)

Yes, Keary Colbert is the 10th coach, and the only spot we’ve yet to fill is the RB coach. I don’t think the Lenny hire necessarily means that, Lenny has been here before and you can say he’s filling a spot vacated by Colbert. Helton definitely uses the non-coaching positions with some good guys, maybe not as many as an Alabama, but Colbert is a perfect example and I think Lenny is too. Helton just hired Bryan Ellis as QB coach after serving one year as an offensive assistant, and there was a lot of talk that Rick Courtwright (a defensive assistant) was in line for the DB job if Bradford left. One thing Alabama does do that I wish we did more is hire former HS coaches from the area to have on staff, including for recruiting. I think there is a tremendous wealth of experience and contacts with some of the local retired coaches who would love to be a part of the SC staff in some way.

pgoodman
Who do you think start at DB and LB… thanks for all your hard work.

I’m going to go with the established guys at corner with Iman Marshall and Jackie Jones, and Ajene Harris in the slot. Marvell Tell at one safety and I’ll go with Bubba Bolden as my pick to replace Chris Hawkins. At linebacker, Cameron Smith and John Houston on the inside, Porter Gustin and Jordan Iosefa on the outside. We don’t know yet if Iosefa will get flipped over to Nwosu’s spot but it’s a move that could happen.

Rainman44
I was pretty shocked to read that Stephen Carr herniated a disc. Was this a weight lifting accident? This injury is pretty huge given USC is already breaking in a new QB. Losing Carr for any extended time in 2018 is huge. I don’t think there is another back on the roster that can do what he does. Comments?

I haven’t heard any kind of confirmation on how it happened. We mentioned in an earlier response that Helton will be asked about Carr this week, we’ll see if he goes into those kind of details. Count me as paying attention on this one in large part because of his talent. We didn’t get to see him for a full season last year and now he is dealing with this. Hopefully it’s fairly minor and he’s ready to go for fall camp.

Lots of rumors but nothing confirmed. Helton was asked about it on signing day and he wasn’t giving any names (my guess is because he really doesn’t know how all the dominoes will fall yet). He simply said he would give the names at the appropriate time. Among the names we’ve heard speculation about include Jalen Greene (transfer for a shot to play QB), Roy Hemsley (transfer to SDSU), Chris Tilbey (graduate), Jamel Cook (transfer to be closer to home), Jonathan Lockett (injury), Olajuwon Tucker (graduate), Jacob Daniel (graduate), Michael Brown (medical non-counter or transfer) and Joseph Lewis (domestic violence investigation).

RPBSC
What time do the spring practices start at?
Here’s all the practice dates and times

LDIABootney
Who in your opinion is the most important recruit on each side of the ball for the class of 2019?

Gold Trojan
Garry,
So much to cover, but we’ll keep it to one player. Brandon Pili. Is he ready to become an every down NT? And will he become a run/pass disrupter “up the middle”?

That would be a big leap for Pili but I think he has that potential at some point. The good news is that I don’t think SC needs him to be that every down guy right now. By the time the season rolls around you have to figure Marlon Tuipulotu will be ready to go with his back, so those two can be a terrific duo. You will also have a freshman option for depth in Trevor Trout, or you could also use Jay Tufele if you need to. After what we saw from Brandon I can’t wait to see how he develops, he just plays with so much energy and athleticism for his size and there is still a lot of upside for his game.

SCdrone
USC has offered 6’11 OT trevor Roberson … it would seem he is to tall to square his pads up with DLs could it be since he is a basketball player and has good hand eye coordination that they are thinking about using him st TE? Imagine a DB trying to cover that and he would be a good blocking TE and great for first downs and red zone, end zone pass receptions

I haven’t heard any tight end talk for him. Randy Taylor and I discussed Roberson in our podcast yesterday, you can listen at the 4:10 mark