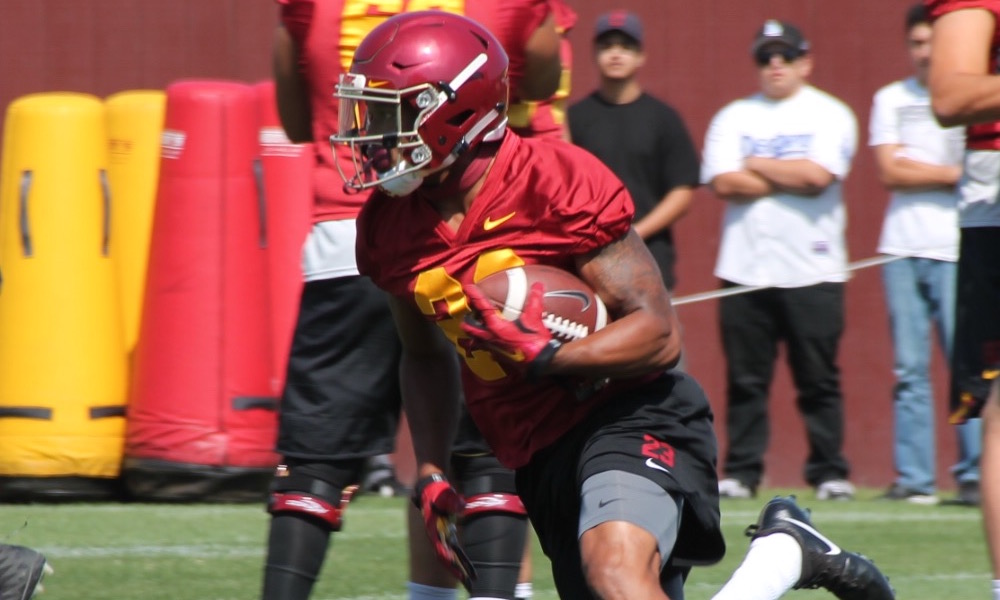 Questions about the USC Trojans this week focus on Bru McCoy, the transfer portal, scheduling, and a coaching dream team.

Q: Erik, when a kid is sitting in the Transfer Portal and making visits, who is picking up the airfare tab?

A: Once you’re in the portal, other coaching staffs are able to reach out and recruit you. From that point, you are basically a high school senior again. So official visits are handled the same way, with the school hosting the prospect able to pay for airfare and lodging.

Q: Erik, what sort of positive 2020 recruiting impact (if any) does the Bru McCoy return-to-Troy episode have?
Thanks & Fight On!

A: I don’t think anybody in the 2020 class is going to commit to USC solely because McCoy transfers back. But if he does make that decision, it’s another piece of this positive momentum puzzle that USC is putting together. His transferring to Texas probably marked the low point of the offseason, with the timing and the quality of the player involved. But then USC had some positive press through spring ball and with the players acclimating to the new strength and conditioning program. Now McCoy’s potential return could move things in another positive step. The coaches will have a chance to put their best foot forward during these June camps. It’s all part of the potential recruiting impact. The first few games of the season will have the biggest impact on recruiting, but so far things are trending the right way.

Q: Please speculate on Bru McCoy’s eligibility for this season?

A: You want me to tell you what the NCAA (an organization that seemingly prides itself on not following its own precedent) will do with regard to a case that has no precedent? I think they’ll make McCoy eligible to play baseball at Oregon, or lacrosse at Colorado, or join the marching band at New Mexico State. It’d make as much sense as any of their other eligibility waiver decisions.

Truthfully, I don’t expect him to be eligible. I don’t think he should have been eligible at Texas if he’d gone through the waiver process. And I think the Justin Fields at Ohio State and Tate Martell at Miami eligibility decisions were indefensible in the context of other eligibility waivers being denied.

Based on how the NCAA has treated the Trojans, it wouldn’t surprise me if USC had to go through an appeal process to ensure that McCoy isn’t considered to be two initial counters in the 2019 class.

Q: Erik, if you were to pick a dream team for athletic director, head coach, defensive and offensive coordinator’s who would be on your short list?

A: For athletic director, I’d look at Alabama’s Greg Byrne, Oklahoma’s Joe Castiglione, and Northwestern’s Jim Phillips. For head coach, I think the top three are Nick Saban, Dabo Swinney, and Lincoln Riley. For someone a little more under the radar, I’d be interested to see what Dino Babers could do at USC. I’d go after Brent Venables as my defensive coordinator, but Jimmy Lake is on that short list. As far as an offensive coordinator, I really want to see what this offense looks like under Graham Harrell. I’m not going to say he’s the best OC in college football right now, but after hearing him talk about his offense and the way the players have picked it up, I’m willing to wait a bit to see how things look this year before I take someone else over him.

Q: For USC players that are in the transfer portal….Are their 4 year guarantee scholarship carries over? asking because most Division I programs renew the scholarship year by year….thanks

A: The four-year scholarship guarantee is actually a rule that was voted in by every Power 5 school, plus Notre Dame, in 2015. So while the USC scholarship agreement is no longer in place after the player transfers, they will get that same protection if they transfer to another Power 5 program.

Q: Is Bru’s scholarship that he left still open for him should he decide to come back?

A: My assumption is that he would not take up another initial counter in the 2019 class, since he’s already being counted in USC’s class. At his signing day press conference, Clay Helton said USC would get McCoy’s scholarship back in the fall, so I don’t believe they were going to lose that spot for a full year. McCoy should just be able to just slide into that spot that USC was going to get back.

Of course, there’s some guesswork involved here, because nobody knows exactly how the NCAA will rule on literally anything.

Q: Since summer workouts will be hidden from the media for the most part, will you still be reporting on the sessions?

A: There are some real limitations on what we’ll be able to get out of summer workouts this year, but we will do everything we can to report on what is going on in the time and space we are allowed. We aren’t able to speak to players during the month of June, and all workouts on Howard Jones/Brian Kennedy Fields are closed to media.

Q: Glad we got Jack Yary as a commit. I’m guessing the staff is mostly considering him as a future TE, but with his current size it has to be in the back of people’s minds of a possible move to OL. Did he ever play OL in high school, and if not does he look like he has the ability and/or interest to transition to the OL eventually?

A: I think Yary could be a very good offensive tackle down the line. He’s been asked to block as a high school tight end and shows very good ability there. I think right now the plan will be to leave him at tight end and see how he develops.

Q: Any Trojan players in the transfer portal which may return to USC?

A: Wide receiver Velus Jones (photo above) is the only one with any real potential to make an impact who might be back at USC. He took a visit to Auburn but has been very quiet about a potential future destination. I think it means something in terms of possibly coming back that he was left on the official spring roster and still appears there now.

Q: I expect Bru will have to sit out this coming season. My question is will he be able to practice and workout with the team?

A: As I mentioned earlier, my expectation is that Bru won’t be eligible to play this season. But he absolutely will be allowed to take part in practice and that should not be discounted when considering the kind of impact adding a player like McCoy can have. While you won’t see him on Saturdays, having him on the scout team would be a big win for the defense, and the team overall. We talk and hear a lot about how “practices were tougher than the games” for programs that are dominating college football (USC under Pete Carroll, Alabama under Nick Saban), and while that definitely has to be a part of your first units going against each other in 11-on-11, it also has to happen a bit during scout team work. If your first group is able to just waltz through scout team work against walk-ons going half speed, it can be tough to ramp that energy up all the way where it needs to be for those final periods. Having a guy as competitive and talented as Bru on the scout team can push the energy level across the board.

Q: Does every PAC-12 team have 2 Friday Night “In -Division Conference” Games?

A: Washington is the only other Pac-12 program that plays two Friday intra-division conference games. They travel to Oregon State on a Friday night and play Washington State on a Friday afternoon. Other Pac-12 programs (Arizona State, Colorado, Oregon State, UCLA, Utah, and Washington State) have multiple Thursday/Friday games, but all have at least one of them as non-conference and many of them are the season opener.