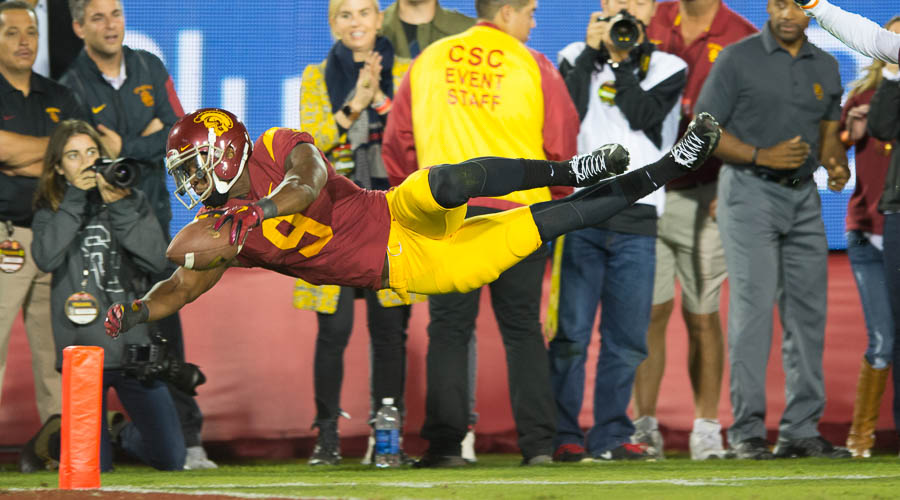 Here is this week’s edition of the WeAreSC mailbag as the Trojans get ready to open spring ball practice sessions next week:

Who are going to be the the DL on the two-deep entering the Alabama game?

GP: OK, there’s a lot of projecting going on here since we haven’t even started spring ball but here’s my guess:

I watched a clip of “cat and mouse” drill at the opening of Stephen Carr making a filthy move on a linebacker. Any comparisons to other running backs, past or present? Also, do you think that since he is committed it hurts our chances with Harris?

I go back to the late 90’s, early 2000’s for a running back that Carr reminds me of – Justin Fargas. Both have good size, moves and they run hard. It remains if Carr can reach a similar intensity in his running style that Fargas used to bring but he has a lot of similarities in other areas. As far as Harris, it’s hard to get a read on him right now but I don’t get the sense he’s going to be worried about any other players at his position.

Will the coaching staff think outside the box and use Jalen Greene as a legitimate triple threat option on offense? With him on the offensive side of the ball I can see the wildcat evolving from the typical running situation to him throwing the ball, running the ball or lining up as a receiver who is a legitimate threat to catch a pass.

GP: I do think that’s going to happen. You get the sense in hearing the coaches talk that they think highly of Jalen and the multiple skills he brings to the table, and we did see him utilized a little more when Helton became the interim coach.

Who can be reasonably be expected to pick up the slack on the defense next year now that Sua is gone. IMO there is a glaring lack of true playmakers on the defensive side. Green? Cam Smith? Adoree? A glance at the roster just now was not particularly encouraging.

GP: I’m going to look at the OLB spot with someone like Porter Gustin, I think he has a chance to really shine in this defense. And Cameron Smith, no doubt, he’s proven what he can do and I expect him to be even better next year. In the secondary I’ll go with Marvell Tell as a guy who can really emerge in the secondary.

Who do you think fills the leadership void left by Kessler, Su’a and others, both vocally and with their dependability? Basically, who are your candidates for getting the honor of having “C” on their uniform next season?

GP: I don’t think there’s any question that JuJu is a captain. I’m guessing the other offensive captain would be Zach Banner, although Justin Davis could get in there as well. And you never want to rule out the possibility of a quarterback, particularly if a veteran like Max Browne wins the job. It’s a little more tricky on defense. I’m actually going to go with a sophomore in Cameron Smith because he’s such a natural leader of the defense. The other spot could easily go to Adoree.

Which one of the new coaches are you most excited about seeing in action up close during the spring practice, and I would include BKU among those.

GP: I would put Neil Callaway at the top of the list, I’m very anxious to see if he is the veteran presence this group needs to become an elite offensive line. His resume is pretty impressive and the Helton brothers can’t stop talking about how good they think he is.