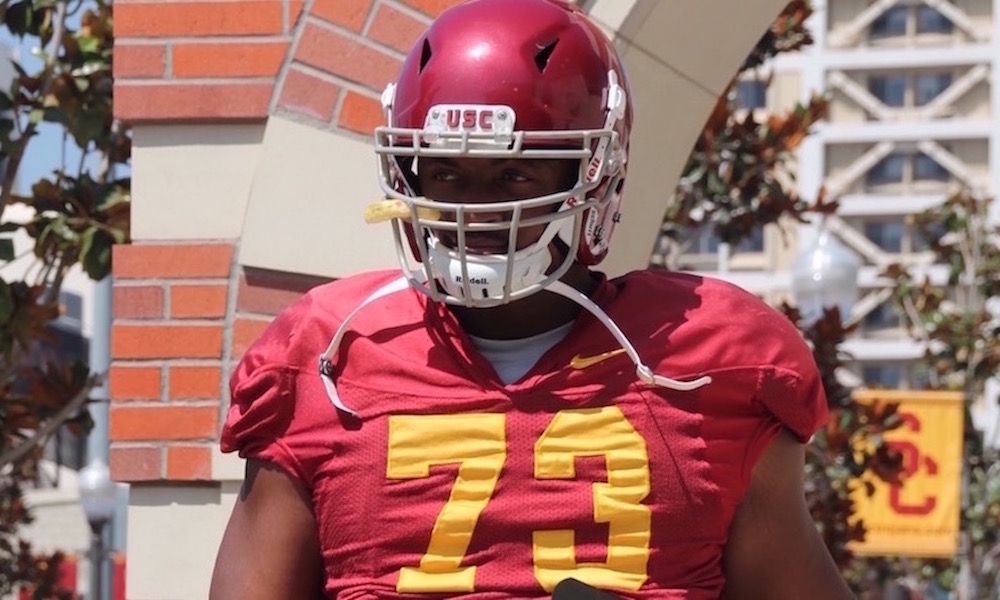 QB spot has been announced with Bryan Ellis, same with Keary Colbert at TE/inside receivers. No announcement made yet on RB coach. Tee Martin reported to be close to signing extension to remain at USC but no official word yet. Neil Callaway still in place as OL coach. Kenechi Udeze has interviewed with 49’ers but is still the USC DL coach as of today. Johnny Nansen is still in place at OLB, although there are rumors he could return to RB coach. Clancy Pendergast is still DC/LB and Ronnie Bradford is DB coach. And there are continuing rumors that we might see more coaching movement after signing day.

ectrojan
Do you think the spring game this year will actually be a game or just another glorified practice?

I would lean toward a glorified practice, especially since that’s what we’ve seen the past two years. Clay Helton has shown that he will err on the side of less contact in a practice as a way to help keep players healthy and it would surprise me to see that change for a spring game.

901 Club
Last chance to predict in a Thursday Q&As — who on LOI day?

Griffin, Solomon, Williams as 3 of the choices as of today. We’ll let the tea leaves blow for a few more days before making final choices. Would love to add Sewell at the end.

usc88
In this modern age, it is hard for a team to win without a good passing QB. Is it possible for JT Daniels to win the starting spot for next year?

Sure it’s possible, he’s got that kind of talent. There are also a long list of reasons why it will be hard for him to do it, namely the limited time in fall camp and two guys by the names of Matt Fink and Jack Sears, talented quarterbacks in their own right who have been in the system. But when you’re talking about pure passing ability there aren’t too many you’re going to find better than JT, and he’s got a very advanced football mind too.

fighton55
How would you rate of current group in Offensive Lineman I these categories (top 2 in each):

Rigged4fun
Will the Coli be ready for spring practice games?

We haven’t heard anything official but right now there is no grass field on the floor of the Coliseum as the area is being used for trucks, equipment and access areas as part of the construction, which certainly won’t be done by the time the spring game is held.

dbergusc
Garry,
How likely do you think that Coach KU is going to leave? I know there was a lot of frustration that people thought he wasn’t ready but he’s clearly made a big impact on the DL even from the first bowl game. I think it would be sad to lose him and hope they try to hold on to him for a few more years since a former USC player, NFL player, effective coach, and great recruiter is always a winning combination.

I’m concerned about Kenechi possibly leaving. He wouldn’t be going through this interview process with the 49’ers during the heart of the recruiting period if he wasn’t serious about the possibility of taking the job. That would be a real tough one to take if it happens but it hasn’t happened yet, so hopefully it works out for him to stay. For all the reasons you list this is a guy we should not be losing.

Poodlemothra
Garry, Does it concern you that ITS, Griffin and Letu are all taking visits to other schools the final weekend of recruiting? In my mind, this suggests that at least one or more is not coming to USC. What say you?

Griffin and Taylor-Stuart are uncommitted and are known to be taking visits to other schools, that’s one thing. Tuli is a longtime commit who hasn’t made any waves or shown real signs of looking elsewhere, that’s a completely different story. There was some brief talk a few weeks ago about taking a trip to Utah out of respect for the position coach but that didn’t happen, now we get this Washington trip out of the blue and you know they are looking to pull out all the stops to flip him and make up for Marlon.

CrownoftheValley
Garry, do we win next Wednesday?

Clay Helton is 2-0 on February signing days so I’m going to say yes.

SoCalN8tiv
Garry, can you give us your thoughts about the NCAA board of directors mandate to change the transfer rules for the next year? Do you think the Big 12’s proposal will be adopted?

1) Any player can transfer if there’s a coaching change but can’t follow the coach to another team.

2) The end of having to sit out a year so any player can immediately play.

3) *Player can transfer if team receives a penalty and is banned from post-season play.

I believe USC was already victimized by #3 during the sanction years when Lane Kiffin quipped how USC started “free agency” in college football.

Is college football headed towards this “free agency”?

How will recruiting be affected? Less urgency or more urgency to sign must get players?

Thank you in advance for any thoughts you can offer 🙂

It sure seems like some form of this is going to pass, and I’m in favor of rules that make sense to benefit the athlete. I still think there are details to get worked out, on the rule of a player not being able to follow a coach, what happens if the player had already decided to transfer to that particular school, or if they player and coach have a unique relationship that makes sense for him to follow? If a player doesn’t have to sit out a transfer year, are there deadlines that he must announce a transfer? Can you do it at the end of spring? If so, a school is hard pressed to fill that spot by the fall.
​
scdg71
I know that in the past schools like Bama have over-recruited but I don’t recall us doing the same before. Are there some unique situations this year? Or are we learning to play the game of over-recruiting? Or are the extras backup contingencies?

No unique situations like oversigning this year, just a lot of managing of numbers and looking at all contingencies.

Austin Jackson (photo above) would be my choice as the most likely to be a first-round pick. There’s just so much potential there with his combination of size and athleticism, and I’m really looking forward to seeing how he handles the transition as the left tackle of the future.